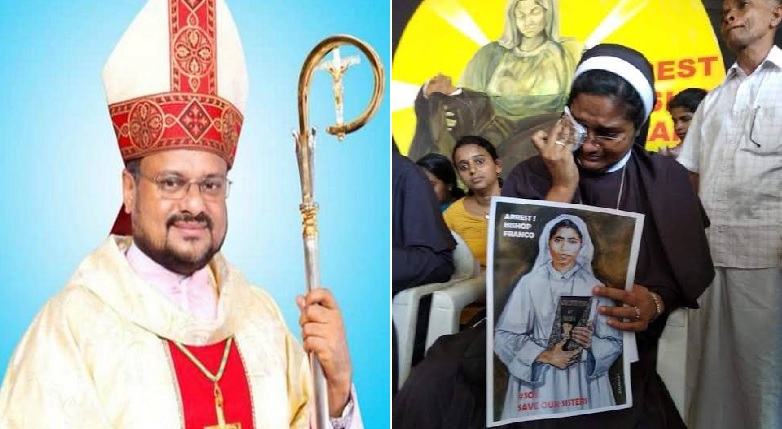 The prosecution and victim in the nun rape case will file separate appeal petitions in the Kerala High Court against the controversial acquittal of Catholic Bishop Franco Mulakkal by a lower court in January. On Wednesday, the state home department asked the advocate general to do the needful for filing the appeal.

According to a source, the victim nun will also be filing an appeal petition shortly. While she has been completely abandoned by the all-male Catholic Church hierarchy, who in fact turned on her when she raised her voice for justice, the brave survivor has decided to soldier on.

On January 14, the Kottayam Additional district court judge G.Gopakumar gave a clean chit to Mulakkal. Later, the special prosecutor in the case Jithesh Babu said that the acquittal would be challenged. The deadline for filing the appeal is 90 days from the date of the lower court verdict.

Incidentally, soon after the lower court’s verdict, the former Kottayam SP of Police Harisankar who oversaw the probe said he was confident that the verdict would be against the accused and never thought they will lose the case.

The trial in the case extended over 105 days with 39 witnesses being examined and 122 documents produced before the court. While serving as Bishop of the Jalandhar Diocese of the Roman Catholic Church, Franco was accused of raping a nun, who belonged to the Missionaries of Jesus congregation.

During his visits between 2014 and 2016 to Kerala, he is accused of raping the 43-year old nun on 13 occasions. The rape victim approached multiple higher-ups in the church hierarchy and even wrote to the Vatican for justice, to no avail.

The nun finally lodged a police complaint against Mulakkal in June 2018. Police dragged its feet, and the Catholic Church started a smear campaign against the nun. MLA PC George even stooped as low as to call the nun a ‘prostitute’. A few nuns and lay people came forward to support the victim and mounted street protests. Ruling CPM said the protesting nuns were ‘tarnishing’ Kerala and the government’s image (shades of Mamata Banerjee’s vile victim blaming in the Hanskhali case).

A police team went to question Mulakkal in Jalandhar, and the accompanying media were attacked by the Bishop’s supporters. Finally, due to mounting public pressure, Mulakkal was arrested on September 21, 2018 on rape charges. He secured bail on October 16, 2018 – in less than a month. A few days after his release, a key witness was found dead under murky circumstances.

The charge sheet named 83 witnesses, including the Cardinal of the Syro-Malabar Catholic Church, Mar George Alencherry, three bishops, 11 priests and 22 nuns. Of the 83 witnesses, 39 were called and they were heard. A key witness died during the trial

Mulakkal had approached the Kerala High Court and also the Supreme Court to quash the FIR against him, but both the courts refused to do so and the trial began. But the teflon of ‘secularism’ has allowed many a criminal to escape the long arms of the law in Bharat, and Mulakkal’s acquittal did not come as a surprise to hardened observers of our secular state. With the acquittal being appealed in High Court, the wait for justice continues.