Vanchinathan – Remembering the Great Hero on His 106th Death Anniversary 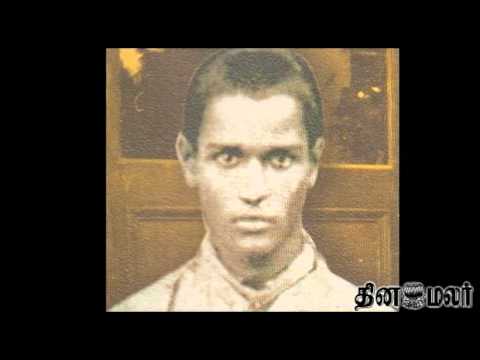 Vanchinathan Iyer, popularly remembered as Vanchi, was a fearless freedom fighter, who participated in Bharat’s independence movement and gave up his life as a symbol of the uprising of Swatantra Bharat against the British and the atrocities committed by them in the name of governance. At the age of 25, he assassinated Robert Ashe and embraced brave death.

Hailing from Tamil Nadu, he was born to parents Raghupathy Iyer and Rukmani Ammal in Shenkottai (then part of the Travancore Kingdom) as Shankaran Iyer in the year 1886. He completed his schooling and higher education in Shenkottai .

Vanchi is notable as being one among the first and prominent Tamils who took part in the struggle for freedom and in some instances initiated the fight against the British Raj.

While working in Travancore, he came under the influence of many nationalists like V. O. Chidambaram Pillai, Neelakanta Brahmachari, Subramaniya Siva and Subramaniya Bharathi. They were his mentors and together they belonged to the Bharatha Matha Assocation (1900).

Robert William Ashe was the collector and district magistrate of Tirunelvelli district in year 1911. He was engaged in activities that were largely favourable to the ruling British class , ignoring and ensuring that the interests of the locals are never addressed nor issues pertaining to them redressed. He is also accused of propagating missionary activities of forcible conversion. Ashe was also instrumental in working against V. O. Chidambaram Pillai’s shipping company (established as the first indigenous Bharatiya shipping company between Tuticorin and Colombo) which led to its liquidation, and later in Pillai’s arrest.

On 17th June 1911, the Maniyachi Mail left Tirunulvelli Junction for Maniyachi with Ashe and his wife Mary Lillian Patterson aboard. They were on their way to Kodaikanal with their four children. At 10:38 AM the train pulled in at Maniyachi. The Ceylon Boat Mail was due to arrive at 10:48 AM. As the Ashes sat facing each other in the first class carriage, waiting for the Boat Mail to arrive, a neatly dressed man with tufted hair boarded the carriage and pulled out a Belgian made Browning pistol and shot Ashe at point blank range in the chest. The bullet hit Ashe and he immediately collapsed. Vanchi ran along the platform and took cover. After some time he was found dead having pulled the trigger in his mouth. The pistol was found to be empty, indicating his intention to shoot only Ashe and himself and nobody else, not even Ashe’s wife.

A letter with the below words was recovered from his pocket,

The mlechas of England having captured our country, tread over the sanathana dharma of the Hindus and destroy them. Every Indian is trying to drive out the English and get swarajyam and restore sanathana dharma. Our Raman, Sivaji, Krishnan, Guru Govindan, Arjuna ruled our land protecting all dharmas and in this land they are making arrangements to crown George V, a mlecha, and one who eats the flesh of cows. Three thousand Madrasees have taken a vow to kill George V as soon as he lands in our country. In order to make others know our intention, I who am the least in the company, have done this deed this day. This is what everyone in Hindustan should consider it as his duty.    –

The letter clearly indicates the motive behind the assassination was the removal of English mlechas (who eat the flesh of cow) who were destroying Sanatana Dharma. This clearly goes parallel with the common statement, “Poisonous weeds have to be removed at the earliest or else they could prove to be fatal.”

This brave and selfless act of Vanchi acted as the much needed adrenaline rush for Bharat’s independence movement. The assassination and contents of the letter caused great apprehension and unrest.

Ashe was the first and only colonial British officer to be assassinated in Dakshin Bharat throughout the freedom movement. The British were left shocked and rattled by this incident.

The Maniyachi Railway station was later renamed as Vanchi Maniyachi station. But it is greatly sad and shameful that this is the best act of secular government of Bharat to recognize the brave act of Vanchi and that this is the highest honour given to his bravery. And it is immensely angering that even this little gesture has become a thorn in the flesh of Dravidians and evangelists. It is unfortunately being used as a catalyst by #BreakingIndia forces to fulfil their agenda by demoralizing and demeaning Bharat’s history and belittling the valour of our brave heroes.

One such dangerous trend started by them is to brand nationalists from upper castes as casteists forgetting their contributions and sacrifices – this can be equated to the insult of our army jawans fighting to safeguard our borders. Falsified stores are being spread to tarnish the image of these brave warriors. One such illogical story is currently being floated around by the Periyar followers of Tamil Nadu where Ashe is eulogized as the champion of downtrodden people.

According to this fantastic spin, Ashe apparently angered Vanchinathan by taking a poor woman in labour pains to hospital via driving through agraharam. Yes, agraharam, the area around the temple where Brahmins live. Since Vanchi supposedly had so much hatred towards the lower castes, this is the reason for him assassinating Ashe.

Now this story is not only ridiculous but also completely devoid of any sense and logic. Ashe was a tax collector for the district of Tirunelvelli in the Madras Presidency, which was under British rule. Shenkottai was in Travancore state (a sovereign state). It can be clearly seen that Ashe had no business whatsoever to be in Travancore. Even if for argument’s sake we accept this falsified theory, geographical location and the city’s plan do not support this theory. In Shenkottai, the agraharam was located in a remote area outside the town. Now why would Ashe drive a woman in labour pain through the remote agraharam outside the town to the hospital inside the town? This clearly shows the baseless allegations made by these sectarian groups to tarnish the image of our freedom fighters.

Are we going to stay silent and let these fringe groups hijack the achievements and sacrifices of our freedom fighters by sullying their names with ulterior motive to break Bharat on the lines of caste? If no, then it’s high time we started teaching our children the real history which has always been ignored in our school.

Note: This article first appeared at https://madrasmamiblog.wordpress.com/2017/06/16/vanchinathan-remembering-the-great-hero-on-his-106th-death-anniversary/ and is being republished here with the permission of the author