Vaccination : a medical practice borrowed by west from Bharat 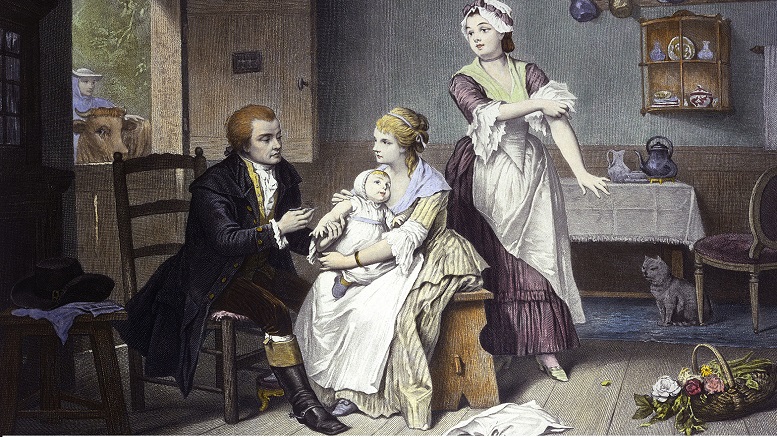 Due to the COVID pandemic, vaccines and vaccination is in the news almost daily. Many newspapers and portals have also covered the history of vaccination. Most of them have started the history of vaccination from an English physician of 18th century, Edward Jenner. In fact, that is what most of us read in school where we were taught a little story about how Jenner came to realize that milkmaids do not get smallpox. How he made a connection between smallpox and cowpox and how he then invented the vaccine of smallpox which has saved millions of lives is common knowledge today.

However, there has been ample evidence that vaccination was practiced in Bharat for centuries at the time when Jenner published his “innovation”. The British sources of 18th century, written decades before Jenner’s smallpox vaccine was announced, give detailed accounts of Bharatiya method of inoculation against Smallpox.

The word vaccination comes from the the word vacca in Latin, which means cow. It was named so, because Jenner demonstrated the method to protect against Smallpox by relying upon the pus taken from cowpox found in cows and transmitted to humans. Before the term vaccination came into practice, similar practices were known as inoculation.

The inoculation against Smallpox was practiced in Bharat since ancient times. Some form of inoculation was also practiced in China and Turkey, however, research needs to be done to find out if they had a similar low mortality rate as the Bharatiya method and if they were influenced by the Bharatiya method. It is well known that Buddhist monks from China came to Bharat to learn in our universities and introduced Ayurvedic practices in China. Similarly, after the Arab attack, many Hindu medical texts were translated in Arabic as they found Hindu medicine very advanced.

Reports of inoculation practiced against smallpox in the Orient i.e. Asia/East started reaching England in early 18th century. In 1731, the first short description of Bharatiya method reached England in a letter by one Robert Coult. The letter said that the natives call this “Tikah” and the same “has been known in the Kingdom of Bengall as near as I can learn about 150 years”.

Another account, written in French by Rev Charles Chais gives a detailed account of the process in 1754. He mentions that “smallpox inoculation had indeed been prevalent in Bengal for a very long time. The variolous matter was preserved in a twisted thread that was inserted into a needle, which in turn was passed between the flesh (chair) and skin (cuir).” Chais also mentions that a native doctor preserved the variolous matter “from the time of his grandfather or greatgrandfather” thus making the virus weak and ideal for inoculation with only mild symptoms.

Based on account of Chais, Swedish doctor David Schultz inoculated his King’s four children in 1769, for which service he was ennobled as van Schultzenheim. Dr Matthews Maty of London in 1765 described two methods of inoculation prevalent in Bengal.

“In the more common and efficacious method, a child’s skin was punctured and rubbed with the smallpox matter. Since ‘this way of managing the operation is very painful, a more easy one has been invented for people of quality and rank’. Smallpox matter was mixed with sugar, and swallowed by the child in any sweet and pleasant-tasting liquid”

However a detailed account of the process by a person based in Bharat was first given by John Zephaniah Holwell. He reached Bengal in 1732 as a surgeon in the East India Company and continued to serve the Company in Bharat until 1761. He briefly served as a Governer of Bengal in 1760. Back in London in 1767, he published a 40 page description of the process titled “An Account of the Manner of Inoculating for the Small Pox in the East Indies with Some Observations on the Practice and Mode of Treating that Disease in those Parts” A readable pdf copy of the same is available here for reading download.

Holwell credits the “Brahmins of Hindustan” for this great method “generally followed with such marvelous success” and which can do “great benefit” to the mankind. He remarks that the disease has been mentioned in Ayurveda texts, which are more than three thousand years old. He mentions a tribe of Brahmins, which come from colleges of Vrindavan, Benaras and Allahabad etc. annually to all over the country before the Smallpox season. The Brahmins go from house to house and perform the operation at the door of their patients. Then he describes in great detail how the variolous matter is kept with the Brahmins, from earlier years and after mixing with Ganga water, applied on a puncture in the skin made at the time. He admits that initially he thought it was a dangerous practice, but he was influenced by the method and was convinced of the “propriety of their method”. The patient was to abstain from fish, ghee and milk for a period of one month before and after the operation.

Holwell asked he explanation of the disease from the Brahmins and got the answer that :-

The mediate (or second) acting cause,which stirs up the first, and throws it into a state of fermentation, is multitudes of imperceptible animalculae floating in the atmosphere; that these are the cause of all epidemical diseases.

The imperceptible animalculae are nothing but the microorganisms or germs. He further explains how the Brahmins think that these germs are everywhere and pass through the respiration “without injury to themselves” and that these grow more in numbers in certain seasons. Clearly, the Hindus were independently acquainted with the germ theory of disease and had arrived at the process of vaccination through an empirical and rational process.

The British, who were aware of the medical practices in Bharat, borrowed the same in England and developed their own methods. However, in the nineteenth century, the contribution of Bharat was started to be denied and derided. How could the masters be indebted to the slaves? How could a superior civilization borrow something from barbarian natives? Starting in 1804, British started vaccination in Bharat and claimed it was the invention of Jenner. It was officially noted in 1805 that vaccination was opposed by ‘Bramin inoculators’ because it threatened their profession. Slowly, even the memory of those Brahmin inoculators was forgotten.

The story of the vaccination is similar to the story of surgery. Like vaccination, plastic surgery was transmitted to Britain from Bharat almost at the same time as inoculation. Joseph Constantine Carpue, who performed the first rhinoplasty in England, learnt the method for 20 years in Bharat. It was then propagated in Europe as “Carpue’s Operation”.

It is time that we protect our history and let our coming generations know about the glories of Bharatiya civilization. Unfortunately, history text books in Bharatiya schools do not mention these achievements. Dr. Jenner’s innovation was not born in a vaccum. The historical context behind it should be brought to the knowledge of every Bharatiya.