“This is an Islamic State and the Hindus must accept the Muslims as the ruling race”: How British officials abetted the Islamist Nizam of Hyderabad 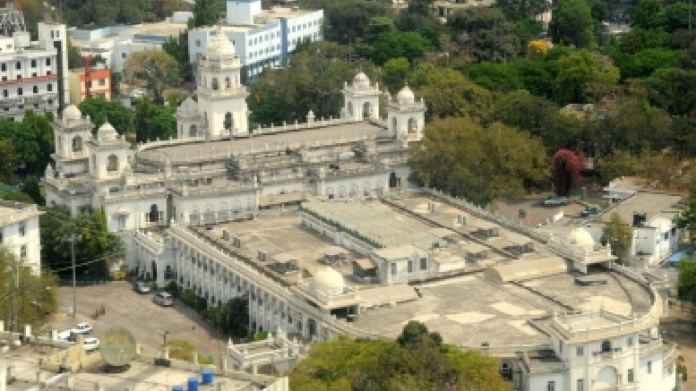 Hyderabad, without doubt like Kashmir, was one of the premier states of Bharat. Though perceived to be medieval and backward, it was an anachronism since it had an ambitious economic and industrial policy with a heterogenous population of almost a crore and half.

It was a state which was governed by a succession of British India statesmen since the ruler had the reputation of being a God-fearing recluse who loved to compose couplets in the solitude of his none-too-pompous palace. Considered to be the richest man in the East, and one of the great hoarders of his time, his wealth it was said lay in dust-laden sacks and was unfathomable.

The population of the state was a great mixture of social groups and classes with sharp differences of outlook and behaviour. A curious combination of the new and old world — a parasitic class of indolent nobles and jagirdars, polite in behaviour but feudal in outlook, and a vast multitude of semi-starved people tied to the soil for the benefit of their lords. Then there was a small but compact class of officials and public servants, a sort of new aristocracy superimposed as the rulers and a discontented but ill-organised mass of educated middle class; loitering Arabs with naked swords sauntering in the parks and streets with no definite purpose in life and scattered groups of idlers and hangers-on crowding the tea shops and the cafes to discuss the yarn that one of them had spun around the latest scandal in the city.

This is what Hyderabad looked like at first glance, but a deeper probe revealed a greater sense of conflict, a seething discontent and a mighty struggle brewing from within. It was a communal tinderbox. It went back to the time of Lord Minto’s viceroyalty when the Hindu-Muslim divide was first given shape. It caught on in Hyderabad in the 1920s primarily due to the aggressively militant behaviour of the Muslim communal leadership, which arrogated to itself the right to speak not only on behalf of the Muslims of Hyderabad, but also for the reclusive Nizam himself.

Geographically and linguistically, Hyderabad at the time consisted of three distinct parts that were portions of the three great provinces — Andhra, Maharashtra and Karnataka in the immediate neighbourhood. There were at the time approximately 70 lakh Andhraites, 50 lakh Maharashtrians and 25 lakh Kanarese. Hindus formed about 85 per cent of the population and the Muslims, the biggest minority community, about 10 per cent. It was felt that an invidious distinction had been maintained with regard to the recruitment to services and the Hindus had as a result felt ignored and hurt.

The argument of the government that the Muslims are service-minded and thus drawn towards state services by temperament and historical tradition did not appeal to the Hindus. The education policy of the state, which had enforced Persianised Urdu both as the official language and also the medium of instruction in the secondary stages of education, had also not found favour with the large mass of the population, leading to the growing divide. There was also a sense that a complete suppression of civil liberties due to the various regulations and circulars of the government and the Ecclesiastical Department made it impossible for people to carry on with their normal religious and social activities.

Repeated attempts of both Hindus and Muslims to establish common political and social organisations were almost instantaneously suppressed with characteristic ruthlessness and violence. The Hindu Praja Mandal was the organisation of the Hindus and the counterpart of the Hindu Mahasabha in Hyderabad. After the uprisings of 1938, other religious organisations such as the Arya Samaj, Hindu Civil Liberties Union and Hindu Praja Mandal came into prominence and became the organisations trusted by the Hindus for their definitive political and social programmes. But these organisations at the time were under the influence of the Hindu Mahasabha and opposed to the politics of the Indian National Congress, which was trying to gain a toehold in the state.

In what was a polarised society, Muslim politics was completely dominated by a communal leadership. In the absence of civil liberties and consequently popular political organisations, Muslim communalism thrived greatly on the exaggerated fears and suspicions of the community. Muslim politics of Hyderabad was thus dominated by two streams — the first and more powerful was known as the King Kothi Group, which was represented by an organisation called the Majlis Ithad-ul-Muselmeen, and the other school of thought, for want of a better description, was called the New Aristocracy Group, which had no formal organisation representing it but comprised Nationalist Muslims.

The King Kothi Group represented the aggressively communal and militant section of Hyderabadi Muslims who regarded Hyderabad as a Muslim State with Muslims as the ruling elite and the Nizam as the symbol of their sovereignty. The complete hold of Muslims over the government and administrative machinery was therefore not just a measure of political expediency, but also viewed as an inherent right and privilege of the ruling class. This led to the belief in the run-up to independence that Hyderabad could retain its sovereign status either in alliance with other powerful Indian states such as Travancore, or as an independent member of the British Commonwealth of Nations.

Affiliated to the Majlis were several auxiliary bodies such as the Anjuman-i-Tabligh, Anjuman-i-Khaksaran and Muslim Volunteer Corps, which worked under the guidance and supervision of the parent body. The Majlis stood for the supremacy of the ruling race and status quo of the Nizam’s continuing rule. Against the much condemned Constitutional reforms, which weren’t introduced after six years of their announcement, the Majlis took an extremely aggressive position.

Hyderabad, the Majlis argued, needed no change either in the system of government or in its administrative machinery. They rioted on several occasions and even threatened to take up arms if a change was contemplated either in the position of the ruler, or in the proportion of Muslims in the administrative set-up. Towards the Hyderabad State Congress, the Majlis was equally antagonistic. The government was openly threatened that if the ban on the State Congress was lifted, a state of civil war would be unleashed. The Congress remained a non-sequitur. The Nationalist Muslims did not have an organised set-up and though they were progressive, they lacked a cohesive following.

Their view was that Hyderabad needed change, but their quest for security overrode any sincere desire to take the state towards the goal of full responsible government. While the Nizam was supreme, the jagirdars occupied a dominant position in the scheme of things simply because they were loyal to the Nizam. The Muslim middle class and intelligentsia formed the bulk of the official class which constantly played safe. Hyderabad was thus the confluence of reactionary upper class attitudes and the revolutionary nature of the mass movement, which only aggravated the communal situation on the ground for the majority community, in this case the Hindus.

Then there was also the Muslim revivalist movement which received a huge response and, as Sir William Pell Barton, a former British Resident (1925-30), explained, Hyderabad was becoming the cultural centre of Islam in Bharat. The establishment of Usmania (Osmania, named after the Nizam) University and the introduction of personalised Urdu as the official language of the state as also the medium of instruction were naturally a fulfilment of the same desire.

At the very centre of this sphere of influence was the Nizam himself because he took a personal interest in Muslim politics in Bharat. He claimed he was descended from Abu Bakr, the first Caliph of Islam, and his son had married the daughter of the last of the Caliphs. The ex-Sultan of Turkey received a pension of 4,000 pounds sterling.

The Muslim leadership in British India obviously gravitated towards the Nizam and Hyderabad. On any occasion the personal intervention of Jinnah averted serious conflict between Muslim communalists and the government. Especially after the constitutional reforms of 1939, when it was Jinnah who came to Hyderabad on behalf of the Majlis to receive personal assurances from the Nizam regarding the statutory position of Muslims in the state.

Consistent with this attitude, the government ruthlessly suppressed all popular efforts at building up a healthy and progressive public life in the state. The State Congress was crushed but communalism was encouraged subtly. The Firman of April 1909 was probably the first official statement which referred to Hyderabad as an Islamic State.

But this theory received greater publicity after the First Round Table Conference, when Sir William enunciated the narrative that the Muslims of Hyderabad, in spite of their numerical unimportance, could not be considered a minority because they were the Ruling Race of Hyderabad. Subsequent British officials popularised this rationale with greater clarity.

Samuel Thomas Hollins, the then Director General of Police, is reported to have announced to the State Congress prisoners: “This is an Islamic State and the Hindus must accept the Muslims as the ruling race. If you are unwilling to do so, you are liberty to leave Hyderabad.” This is just one of the many instances of racial bitterness and communal discord preached and fostered by British officers in the state.

The Nizam added to this chaos through his Firman-i-Mubarak of July 1939 wherein he referred to Hyderabad as the ‘Muslim State’ and his PM, Sir Akbar Hydari, finally restated this position in his Arzdasht of July 15, 1939, which stated, “… the importance of the Muslim community in the State, by virtue of its historical position and its status in the body politic, is so obvious that it cannot be reduced to the status of a minority in the Assembly.”