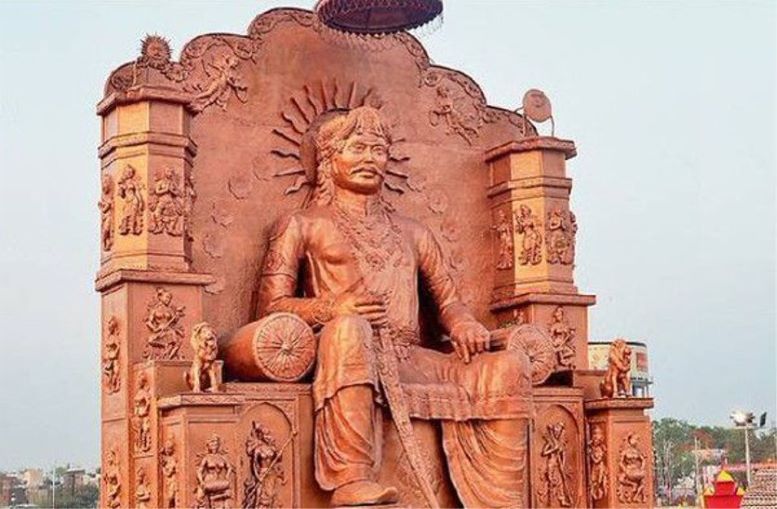 Bharat is a land of great kings lost in the sands of time. One such emperor was Samrat Vikramaditya, whose capital was Ujjain. Vikramaditya hailed from the Paramara dynasty.

The feats and heroics of Vikramaditya have been passed down through folklore in the form of stories. Simhasana Dwitrimsika and Betaal Pachisi talk about the exploits of the great king Vikramaditya. He was the younger brother of the famous ruler Bharthruhari. After Bharthruhari gave up the throne to spend the rest of his days in contemplation (Vanaprastha & subsequently Sanyas), the kingdom was plunged into turmoil with the Sakas taking over.

Samrat Vikramaditya fought a hard battle and won back his kingdom. This victory over the Sakas in 57 BCE marks the beginning of the Vikram Samvat. Vikram Samvat is the commonly used Hindu calendar, and rightly so, in honor of one of the most courageous and able emperors Bharat has seen. His impact was so profound that later kings and rulers adopted the title Vikramaditya to show off their military and administrative prowess.

He was not only an able Kshatriya but also a great administrator. His Prime Minister was Bhatti, who was not only his brother but also a wise counselor. His court is said to have been adorned by the best scholars. His court’s Nine Gems (Navaratnas) were masters of their respective fields.

They were Dhanvantari (medicine), Kshapanaka (treasurer and grammarian), Amarasimha (grammarian), Shanku (policy-maker), Ghatakarapara (literature), Kalidasa (poet), Vetala Bhatta (war strategist), Varamihira (astronomer and mathematician) and Vararuchi (astronomer). All these scholars authored treatises in their fields of knowledge. These texts are an inspiration to this day.

Vikramaditya is mentioned in the Skanda, Bhavishya, and Bhavisyottar Puranas. Itihasa and Puranas have been a part of Bharat’s oral traditions since time immemorial. Due to this, there has been a feeling that Bharatiyas lack a sense of history. However, since the tales have been passed orally, there could be a marginal element of error (exception and not the norm).

Many scholars have, therefore, considered Vikramaditya to be a mythical figure. Moreover, with several kings adopting the title Vikramaditya during later times, things have become complicated. Undoubtedly, such a great and honest ruler once walked the earth and ruled over an empire from his capital at Ujjain.

Bharat’s Navy named its aircraft carrier INS Vikramaditya after the great ruler. Even the postal department recognized the value of Samrat Vikramaditya by launching commemorative stamps on December 22, 2016. The Ujjain Municipal Corporation (UMC) recreated Samrat’s courtroom on Vikram Teela. It is a hillock located behind Mahakal temple and it is said that the Samrat’s throne lay buried here for centuries. The recreated courtroom houses a 26-feet high statue of Vikramaditya, his throne Sinhasan Battisi, and life-size statues of the Navaratnas of his court.

Such is the greatness of Samrat Vikramaditya that every ruler who considered himself militarily and administratively successful has felt compelled to adopt Samrat’s name as his title. Bharat has produced several valorous and devoted sons of the soil whose life stories encourage us and inspire us to emulate their qualities. Unfortunately, our history textbooks also ignore many of these great kings, emperors, dynasties, and kingdoms. Due to this, future generations will always remain ignorant about such great personalities. It is, therefore, our duty to ensure that we make our youth aware of Bharat’s heroes.