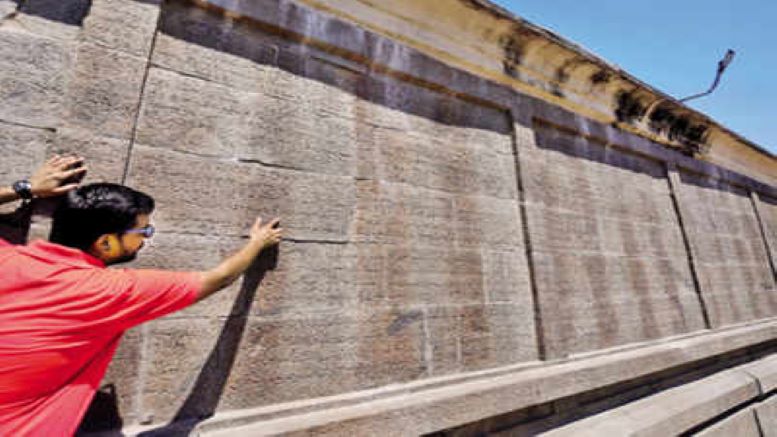 Archaeologists have discovered inscriptions attesting to a fully equipped 15-bed Chola hospital that was constructed more than 1100 years ago under the reign of Virarajendra Chola. The engravings, written in Tamil and Grantha script show that the Chola hospital was fully functional with beds, doctors, surgeons, and even a protocol in place.

Details such as medical procedures, doctors’ salaries (in the form of paddy), types of herbal medicines in use, and methods of rationing food for the inmates have also been found in the engravings discovered at Venkatesa Perumal Temple in Thirumukkoodal near Kanchipuram. The hospital was constructed by Chola rule Virarajendra in 1069 CE at the confluence of Cheyyar, Vegavathi, and Palar rivers.

A Times of India report in this regard says:

The center had two physicians, including a surgeon, and one barber to perform minor operations, two people for fetching herbs, and nurses and medical attendants to take care of patients. The 55ft-long inscriptions with 33 lines running from top to bottom cover an area of 540sqft. It is considered one of the lengthiest such engravings discovered so far in the Indian subcontinent.

While 95% of it is written in Tamil, the rest is in Grantha script. According to archaeologists, it throws light on 19 herbal medicines used for treating fever, lung diseases, and dropsy. As per the inscriptions, first documented a century ago, the hospital was meant to treat inmates of a students’ hostel and temple servants. S Rajavelu, an adjunct faculty member of the department of history, Alagappa University, and former epigraphist with ASI, who studied the inscriptions in the past, said the facility also catered to the public. “It was akin to a medical hospital and college, where students stayed and it was meant for treating the public. It was an ayurvedic cum Siddha hospital because we have references to medicinal plants,” he said.

“The hospital was running on the grants from the government, routed through the temple,” Rajavelu said. The inscriptions talk of an ‘Atular Salai’, which means hospital. Similar health care centers were also functioning in Thiruvakkam near Kancheepuram, Thanjavur, and Srirangam, he added.

The 9th Century temple is under the purview of the Archaeological Survey of India (ASI) which intends to plant herbs mentioned in the inscriptions to recreate the temple garden. ASI Kanchipuram sub-circle’s senior conservation assistant T Saravanan informed the press that the temple would be renovated for consecration as well. “The herbal garden is being established as part of renovation works that would commence this year. It is being executed on the directions of the ASI’s director-general, who visited the temple early this year” Saravanan said.

In today’s pandemic times as even the most advanced countries struggle to put health infrastructure in place, visionary Hindu Kings set up fully equipped hospitals several centuries ago. We could surely take a leaf or two out of our ancestors’ books.