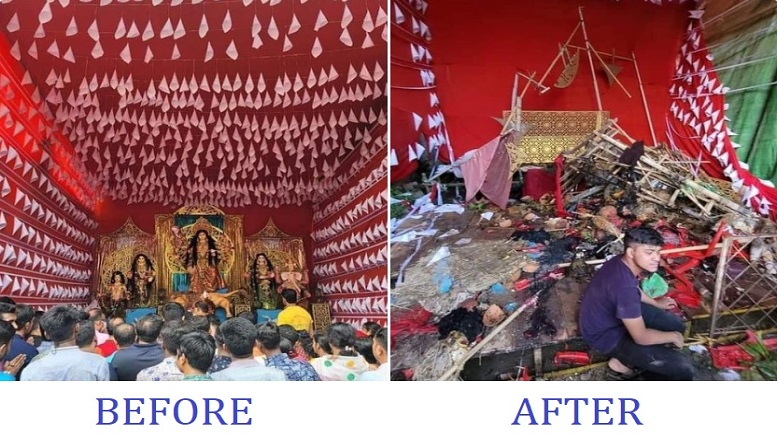 Jadunath Sarkar in his book on History of Bengal Volume II writes on how Bengalis, particularly those in Eastern Bengal (now Bangladaesh) were converted to turushka.

“By destroying temples and monasteries, the Muslim warriors of earlier times had only appropriated their gold & silver; but the sword could not silence history, nor carry off their immortal spiritual treasure wherein lay rooted Hindu idolatry & Hindu nationalism. The ‘saints’ of Islam completed the process of conquest, moral and spiritual, by establishing dargahs & khanqahs deliberately on the sites of these ruined places of Hindu and Buddhist worship.

This served a double purpose of preventing the revival of these places of heathen sanctity, and later on, of installing themselves as the guardian deities with tales of pious fraud invented by popular imagination.

Hindus who had been accustomed for centuries to venerate these places gradually forgot their past history, and easily transferred their allegiance to the pirs and ghazis.

The result of this rapprochement in the domain of faith ultimately created a more tolerant atmosphere which kept the Hindus indifferent to their political destiny. It prepared the ground for the further inroad of Islam into Hindu society, particularly among the lower classes who were gradually won over by an assiduous and persistent propaganda regarding the miracles of these saints and ghäzis, which were in many cases taken over in toto from old Hindu and Buddhist legends.

The most notable example of the invasion of the sites of Hindu worship by Muslim saints is the transformation of the Sringi-Rishi-kund into the Makhdum-kund at Rajgir, and the translation of the miracle-working Buddha of the Deva-datta legend into a Muslim saint, Makhdum Sabib.

(This article has been compiled from the tweet thread of @_ugra_)