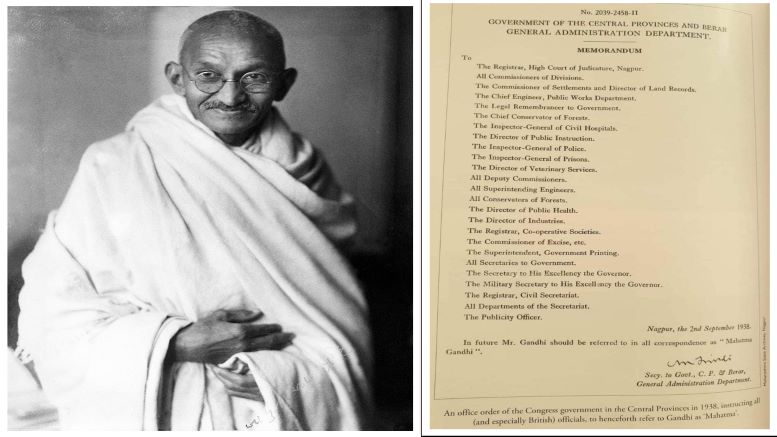 MK Gandhi has been deified in Bharat to such an extent that any attempt to critically analyze his follies, for which the Hindu society continues to pay a price to date, is seen as an insult to the ‘father of the nation’. While Kalicharan Maharaj has stated that he stands by his comments even as he faces multiple cases in Maharashtra and Chhattisgarh where the Shiv Sena-led MVA and Congress are in power respectively, it is time to take a look at the history of the ‘mahatma’ tag.

It was an order promulgated by the Congress government in the Central Provinces on September 2, 1938, that required all officials, particularly British, to henceforth refer to Gandhi as ‘Mahatma’.

Ever since independence the Congress has put Gandhi and Nehru on a pedestal in order to promote them as the sole leaders of Bharat to the exclusion of every other leader from Patel to Savarkar to Bose and several others. The ‘Mahatma’ and ‘Father of the nation’ tags bestowed upon Gandhi by Congress is an attempt to shield him from criticism. Gandhi wasn’t perfect by any stretch of the imagination and the numerous errors committed by him along with his protege Nehru should certainly be scrutinized.

In his article titled “Is Gandhi a Mahatma” for the Marathi Magazine Chittra, Dr. BR Ambedkar writes “The politics of Gandhi is hollow and noisy. It is the most dishonest politics in the history of Indian polity. Gandhi was the man responsible for eliminating morality from politics and instead introduced commercialism in Indian politics. Politics has been denuded of its virtue”.

“Gandhi is a European-truly, a Russian Christian in an Indian body. And there are some Indians in European bodies! Gandhi a European.Yes. When the Europeans say that he is more Christian than many Christians (some even say that he is “Christ of the modern times”) they are perfectly right. All his preaching is derived from Christianity and though the garb is Indian the essential spirit is Christian. He may not be Christ, but at any rate, he comes in continuation of the same impulsion. He is largely influenced by Tolstoy, the Bible, and has a strong Jain tinge in his teachings; at any rate more than by the Indian scriptures-the Upanishads or the Gita, which he interprets in the light of his own ideas.”, Shri Aurobindo had opined.

Does one whose ‘experiments with truth’ bordered on pedophilia deserve the Mahatma tag? Is one who wanted Hindus to bow down before and silently bear the atrocities perpetrated on them by Islamists a Mahatma? Just because the Congress foisted a ‘Mahatma’ on the nation for its narrow political agenda doesn’t mean present-day Bharat shouldn’t introspect and reevaluate whether the leader is worthy of the tag. No leader, whether past or present, is and can be beyond criticism and that holds true for the ‘mahatma’ as well.