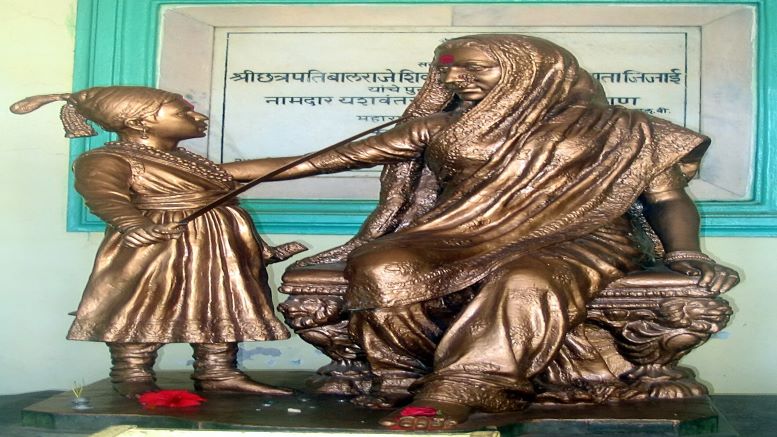 In this five part series on Chhatrapati Shivaji Maharaj we bring to you the life story and achievements of this great Hindu ruler who overthrew Islamic domination and established a Hindu kingdom at a time when Islamic forces were overrunning this great land of Bharat.

One of the greatest disservices that have been inflicted upon generations of post-independence Bharatiyas is the ‘marxisation’ of its history. The itch of ‘secularism’ has led to distortions that deny great ‘Hindu’ rulers their rightful place in the country’s history. Most have at best been ignored or turned into caricatures and at worst turned secular. Times change but that should be no reason to turn a sword into a shovel. Unless a spade is called a spade the generations to come would never learn the real itihasa, and as Orwell said – “The most effective way to destroy people is to deny and obliterate their own understanding of their history.”

History in school (and even at the graduate and post-graduate levels) is so localised that students from the neighbouring states would not even know about warrior kings from different regions. However, everyone from North to South and East to West has been taught about the Lodhis, Tughlaqs, Mughals and every other Islamic dynasty.

This is the reason why Chhatrapati Shivaji Maharaj has been confined to Maharashtra, Vikramaditya of Ujjain hardly finds a place in history texts across the country, Cholas, Cheras, Pandyas and Pallavas have yet to cross the Tamil Nadu border, Kakatiyas, Chalukyas, Kalingas, Satavahanas and numerous other dynasties and their great rulers have simply disappeared from history textbooks. And the kind of history that is being taught would only create more Saif Ali Khans!

Ajay Devgan’s Tanhaji has brought Marathas into the national conscience and therefore it is apt that we bring to the fore the life, times, talent and skills of its founder that made him both a great warrior and an able ruler.

Several factors contributed in making young Shivaji Raje Bhonsale the great “Chhatrapati”. Unlike what Marxist historians would want most of us to believe, his concept of secularism wasn’t ‘appeasing Muslims’. He was absolutely certain about establishing a “Hindu rajya” right from a young age. The environment that he grew up in and the lessons that he received from his parents, Dadaji Kondadev and Guru Ramdas made him strive for ‘Hindavi Swaraj’ and enabled him to overthrow Islamic dominance to establish one of the most powerful Hindu kingdoms of early modern Bharat.

Shivaji Raje belonged to the illustrious Bhonsale clan who were Suryavanshis (Solar race). It is believed that they were transferred to the uplands of Maharashtra by Rajput warrior Devraj Maharana. Maloji Bhonsale, Shivaji Raje’s paternal grandfather, was initially a Shiledar, latter exalted to the rank of Mansabdar, in the service of Nizamshahis and his maternal grandfather was a Mansabdar serving the Nizamshahis of Daulatabad. Shahaji Raje succeeded his father to the Mansab and was employed in the service of Nizamshahi headed by its regent Malik Ambar.

At the time, there was constant warfare between the Mughal Empire and the Deccan Sultanates, and Shahaji was being pursued by a Mughal force. Jijabai was in an advanced stage of pregnancy and hence Shahaji had to leave her at the Shivneri Fort in order to engage his pursuers in war. Shahaji had left three of his trusted deputies to take care of Jijabai. It was in this fort that she gave birth to a son on the 5th of the first half of Hindu month Vaishakh of Shaka year 1549 (10th April 1627). The child was named Shivaji after the patron deity of the fort Shivai Devi. There are discrepancies with regard to the birth date in various bakhars (historical narrative in Marathi). However, 19th February 1630 is the officially recognised date.

Shivaji Raje’s character and views were shaped by his mother Jijabai under whose care he spent the first ten years of his life. She ensured that Raje was made familiar with the past glory of the Bhonsale and Jadhav clans. She also stressed upon the inherent degradation caused by being servile to Mohammedan overlords who had progressed by slaughtering cows, desecrating temples and shrines and overthrowing Hindu sovereignty. These tales along with recitals of Puranas and other Hindu scriptures including Ramayan and Mahabharat sowed the seeds of ‘Hindavi Swaraj’, the will to establish a Hindu kingdom, in the minds of young Shivaji Raje.

By the time Shivaji Raje was 14 his father had moved to serve the Adilshahi kingdom. He came to live with his father at the Adilshahi capital where he witnessed first hand Hindu subjugation at the hands of the Islamic overlords, and anti-Mohammedan sentiments took further root in his young mind.

In 1643 Jijabai and Shivaji Raje were moved to Poona where they were stationed under the care of Dadaji Kondadev. The task of his education was entrusted to Dadaji Kondadev. However, Jijabai remained a constant presence and inspiration in the life of Raje.

Dadaji made sure Shivaji was provided the best military education which would prepare him to become a warrior par excellence. Dadaji put him through a regular system of drill and physical exercises. Besides this he trained Shivaji in Urdu, Persian and Sanskrit. But one of the most important things that Shivaji Raje learnt from Dadaji was the art of administration. He learnt how to keep the peasantry happy while doubling the state revenue.

To understand the phenomenon known as ‘Chhatrapati’ we must know the circumstances that prevailed at the time of his birth till the time he united the warring Maratha chieftains to establish a Hindu kingdom. Most modern historians and liberal brigade want to paint Chhatrapati Shivaji Raje as a secular king (which he was, but not as per the modern definition) while taking away ‘Hindutva’ from him. Limiting Maharaj to Maharashtra and projecting his ‘Rajya’ (kingdom) as a purely ‘Maratha kingdom’ is not just a flawed understanding of the great king but an effort to tamper with history.

This quote from Saptaprakarnatmak Shivcharitra, a biography of Chhatrapati Shivaji written in 1810 by Malhar Ramrao who was the secretary of Pratap Singh Maharaj of Satara, gives us an insight into the mind of young Shivchhatrapati.

“While describing the thoughts that occupied the mind of Shivchhatrapati as a child when he was living with his father at Bijapur Saptaprakarnatmak Shivcharitra says: We are Hindus. These Yavanas are most wretched, who is more degenerate than them? Serving them, accepting food from them or bowing down to them causes immense pain to me. I find it most inappropriate to watch tarnation of Dharma. When I see a cow being slaughtered I feel like beheading the person and seeing a cow in pain makes me feel as if my life has been wasted. If it not for the thought that what father would say stopping me, the first thought that comes to mind on seeing a cow being tortured is to kill the torturer. It is neither good to be in contact with Muslims nor is attending their courts or going to the homes of Amirs.”

It would suffice here to say that the thirst for ‘Hindu Rajya’ took root early in Shivaji Raje’s life. He was a military strategist, astute politician, management expert (without an MBA degree!) and able administrator, all rolled into one. We shall learn about the various facets that made Shiv Chhatrapati one of the greatest ruler of post-medieval Bharat in the articles to follow.