Chakmas : the worst victims of the partition of Bharat are invisible from our history books 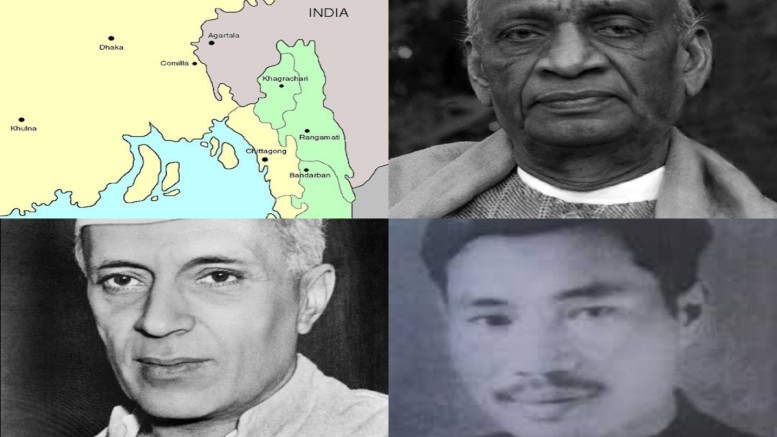 In 1947, before the independence of the country, leaders from the Chakma community went to Delhi to meet Congress leaders and request them to merge the area in Bharat. Chakmas are residents of the Chittagong Hill Tracts(CHT), an area that was 97% non-Muslim at the time of independence. The population of CHT was composed of Buddhist and Hindu tribals, who had been living largely in autonomy since the British annexed these areas in 1860. However, their lands were bordered by areas which were Muslim majority, the areas now likely to be included in Pakistan.

After assurances from top leaders of Congress, they returned and on August 15, 1947, Bharatiya tricolour was hoisted at Rangamati Headquarter in the presence of the then Deputy Commissioner, Col. G.L Hyde to celebrate independence. Afterall, they were a Hindu-Buddhist majority area and according to logic of partition, they would certainly be part of Bharat.  However, the man responsible for choosing which areas would go to Pakistan, Sir Cyril Radcliffe had a problem.

Radcliffe recognised that by the logic of partition, it should go to Bharat. He wrote in a letter to Lord Mountbatten on August 12, 1947 :-

“To which State should the Chittagong Hill Tracts be assigned, an area in which the Muslim population was only 3 per cent of the whole, but which it was difficult to assign to a State different from that which controlled the district of Chittagong itself?”

It was clear that despite his misgivings, Radcliffe as leaning towards Pakistani claim based on contiguity. However, by then it was clear that the neighbouring princely state Tripura would join Bharat and its nominee had joined Constituent Assembly. Radcliffe however thought that East Bengal needed a port after Kolkata had gone to Bharat. So, he prepared a report to give Chittagong port to Pakistan and treated CHT as hinterland of the port city, that had to go with Pakistan. This not only violated the logic of partition, but also was against the wishes of overwhelming number of CHT residents.

On getting wind of the intentions of Radcliffe, the representatives of the Chakmas met Sardar Patel and on August 13, Patel wrote a “Most immediate and personal letter” to the Viceroy asserting forcefully that it is “inconceivable that such a blatant and patent breach of terms of reference should be perpetrated by the chairman of the Boundary Commission” and warned him of “serious consequences” which “both you and I may have to regret“.

Mountbatten was aghast and wrote:-

“it will be seen that the one man I had regarded as a real statesman with both feet firmly on the ground, and a man of honour whose word was his bond, had turned out to be as hysterical as the rest”

“he was suggesting that if indeed the Chittagong Hill Tracts were put into East Bengal the people would be justified in resisting this award by force and that the Central Government would be bound to support them! So much for his understanding on behalf of India to accept and implement the awards whatever they might be.“

The British Governor of Bengal, Burrows had told Mountbatten that the whole economic life of the people of the Hill Tracts depends upon East Bengal and there were no routes into Assam from that place.  The Viceroy was also told that “Chittagong, the only port of East Bengal, depends upon the Hill Tracts; for if the jungles of the latter were subjected to unrestricted felling, I am told that Chittagong Port would silt up.” Mountbatten was “amazed that such a terrific crisis should have blown over a small a matter.”

Nehru initially supported the cause of CHT and argued passionately for it to be included in Bharat. However, Radcliffe went ahead and awarded CHT to Pakistan. The people of CHT did not accept this and the flag furled on August 15 remained furled till 1 week later. Radcliffe award was made public on 17th of August as Mountbatten did not want to create a ruckus on 15th of August.

Immediately after Radcliffe line became public, several protest rallies were held in the Chittagong Hill Tracts. Pakistani army reached the area on 21st August and took control of the area. The Mong Rani Nanuma Devi Chowdhrani of Manickcheri, Chittagong Hill tracts made many efforts to reach Bharatiya authorities and invited them to take control of CHT and assured that locals will support them. She continued to be in contact with Bharatiya authorities long after the independence.

Sneha Kumar Chakma, a leader of Chakmas was even prepared to fight against the illegal award of CHT to Pakistan and met Sardar Patel and Pandit Nehru. He requested military help to reunite CHT with Bharat taking into account the local demography and will of people. However, according to the book written by the son of S. K. Chakma, Nehru jumped up from his chair and thundered – “Do you propose to bring India again under Foreign Rule?”

S. K. Chakma spent the next two years trying to convince Bharatiya leaders for a military intervention in CHT. According to him,  “Though Patel was enthusiastic, Nehru was shaky, unwilling to do any thing that might justify the Pakistani inspired effort to take over Kashmir.” The idealism of Nehru succeeded in pushing the Chakmas under the control of genocidal Islamist Pakistani state. The fact was that takeover of Chittagong Hill Tracts would have been as justified as takeover of Junagarh and quite beneficial to Bharat economically and strategically in the long term.

Pakistan did not take kindly to the efforts of the CHT people and since beginning started its efforts to disenfranchise and displace people of CHT right after independence. In 1962, it constructed Kaptai Dam and displaced lakhs of people from the area. The displaced did not receive any compensation and many thousands had to flee to Bharat due to Muslim persecution.

After the independence of Bangladesh, the situation did not get any better. Chakmas had to reorganise themselves into a militia named Shanti Bahini to repulse the Muslim efforts to convert the people of the area and capture their land. After an insurgency for a quarter of a century, an accord was signed in 1997 to provide some autonomy to the Chakmas and other tribes of CHT.

However, by then the damage had been done. In the 1980s, the government began settling Bengalis in the region, while evicting the natives and succeeded in completely changing the demographics. As of 1974, Bengali Muslims were only 11.6% of the regional population but by 1991, they had come to constitute 48.5% of the population. The current status is there are 55-60% Muslims in the area, aided by rampant Islamic conversion activities and natives are confined to ever smaller areas

As the victims were non-Muslims, there were no vocal supporters. Unlike Palestine which resonates in the heart of every Muslim in the world, similar activities by Muslims in CHT do not find any mention even in news media of Bharat. Most Hindus are totally unaware of the tragedy of Chakmas, who have been one of the worst affected victims of partition. Once in a while, we hear of Chakma refugees in Bharat, but sadly there is no discussion on the status of remaining Chakmas in Bangladesh. The contribution of the revolutionaries of Chittagong, under leadership of Surya Sen is still mentioned in our history books. It is time, we also include the tragedy of Chakmas in our discourse and derive some lessons from it.