It is a general misconception among many (including certain Hindus)  that the ancient  Bharatiya architecture, infrastructure etc were poor compared to other contemporary ancient  civilizations of the world. In this post we shall set some things straight.

Before we start, we should give a general idea of ancient Hindu civilization. It is divided into two main periods : 1) Harappan or Saraswati-Sindhu valley civilization (SSVC) (mature period starting from proto urban stage around 3500 BCE) and later early historic period, starting from the time of Mahajanapada states (700-600 BCE or slightly earlier). Between the SSVC and Mahajanapada period, there is around 1000 years of gap, which was due to the collapse of the urban SSVC starting from 1900 BCE due to the climate change and drying of Saraswati river which  nourished the civilization. Urbanism later picked up from the era of Mahajanapdas.

So we must highlight two ancient urban periods, i.e the SSVC one and later early historic one.

First we highlight the SSVC era. It is a well known fact that the SSVC era saw sophisticated urbanism, and was one of the earliest urbanized civilization of the world, contemporary to ancient Egypt and Mesopotamia. In fact the area of SSVC was much larger than Mesopotamia and Egypt. SSVC cities existed from Afghanistan to Bharatiya state of Gujarat and from Balochistan in western Pakistan to western Uttar Pradesh state in Bharat. It was the largest civilization on the planet at the time. Sites of  SSVC also had reservoir system, drainage, toilets, water supply, planned streets & buildings etc, making it a highly sophisticated ancient civilization. 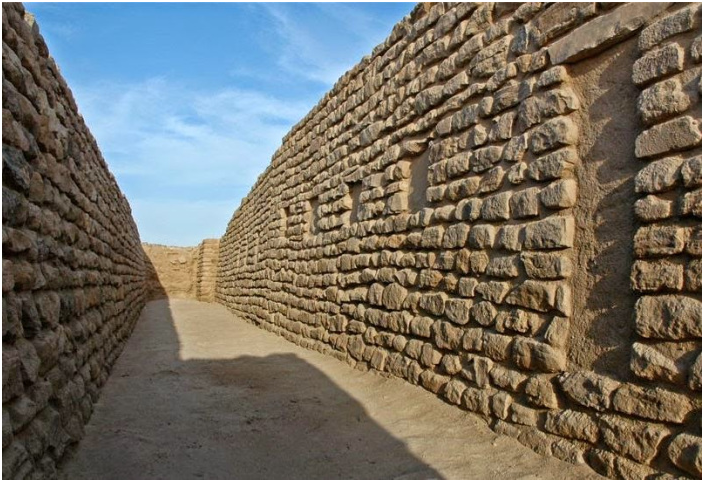 However, it is true that we don’t encounter any large monuments in SSVC, like contemporary Pyramids of Egypt. But Harappans surely had the capability to build such structures as evident from large fortifications found in various sites like Dholavira, Kalibangan, Mohenjo Daro etc.

It is also true that we don’t find any grand statues like the Great Sphinx of Egypt in SSVC. In fact we don’t encounter any statue or other monuments at SSVC at all. There are no remains of any temples or other places of worship, apart from few ritualistic fire altars recovered from several sites. Even most of the SSVC art is gleaned from seals, terracottas, few sculptures etc. It is mostly because the Harappan ideology was different. They concentrated more on building sophisticated cities as mentioned above, along with intense trade and expansion of the civilization (is it a wonder why SSVC covered a vast  area?) instead of building monuments. However, the Harappans were surely capable of building monuments. There are few complexes like from Mundigak, an SSVC site from Afghanistan which has remains of a pillared monument.

So the architecture and infrastructure of SSVC was not inferior to its contemporary civilizations, however the ideology differed.

Now we move on to the early historic period. This period also witnessed intense urbanization after around 1000 years of hiatus from the SSVC era. Palaces, forts and other buildings are depicted in the art of this era from various sites like Sanchi, Bharhut, Mathura etc. Here are a few examples: 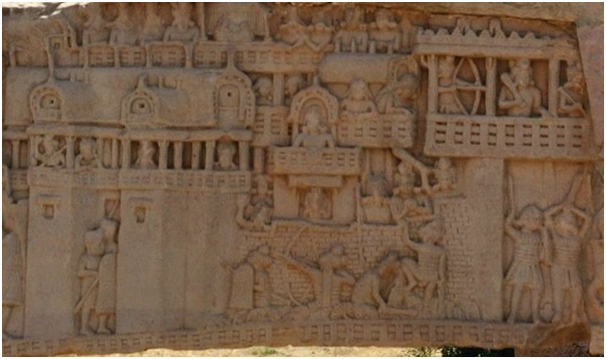 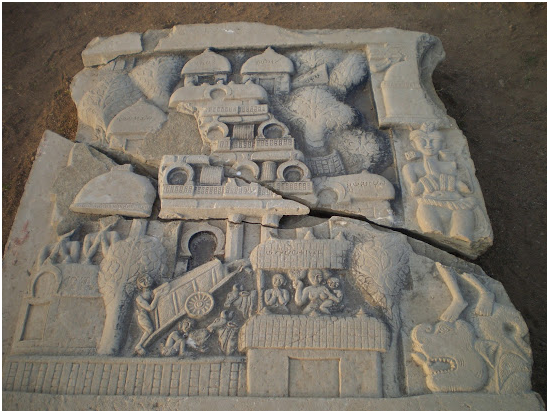 This architectural style has pre-Mauryan origins going back to the early Janapada states, since some coins of early Janapadas depict such buildings (possibly temples).

Sites like Amaravati, Mathura, Kaushambi, Pataliputra etc would’ve been filled with buildings like these in early historic period. Pataliputra is cited by many as the largest city of the world during that era. However, there are no big remains of these grand cities like we find ruins of ancient Greece and Rome, probably because they would’ve been made of perishable objects like wood. This also probably the reason why we don’t have any remains of ancient temples dating to this period. There are few ruins from ancient sites, which survive to this day. The large monument at the site of Lauriya is said to be of early or pre Mauryan origin. Remains of a large structure at Rajgir (ancient capital of Magadha) along with walls, also proves existence of massive monuments or buildings during pre Mauryan era:

It is also important to mention that some people argue that arches, domes etc were brought to Bharat by Muslim invaders. However, as seen from the art of early historic period, both arches and domes existed during that era, much before the invasion of Muslims:

So not only was Hindu architecture thriving during the early historic period, it also influenced other regions. If we move on to the medieval era, it was a time when regional architectural styles evolved and they built wonderful monuments and temples. In fact, the Angkor Wat built by Khmer Hindus was the largest city of its times, hosting the largest religious structure ever built.

So whether we look at ancient period or early historic period, Bharatiya architecture and infrastructure was not inferior to that of contemporary civilizations.

(All images taken from all around the internet).