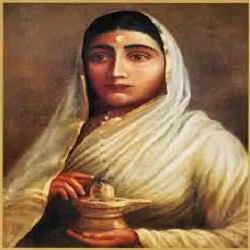 For thirty years her reign of peace,
The land in blessing did increase;
And she was blessed by every tongue,
By stern and gentle, old and young.
Yea, even the children at their mothers feet

The history of Bharat has its own share of great women, throughout the ages who played a significant role as rulers, poets, warriors. Be it the Gond queen Rani Durgavati who defied the mighty Mughal army of Emperor Akbar, or the brave Rani Laxmibai of Jhansi who fought against the British – their deeds are a part of folklore and history. In such an illustrious pantheon, there was Ahilyabai Holkar, the daughter in law of Malhar Rao Holkar, the founder of the Holkar kingdom. Widowed at a young age, took over as queen, she takes her place in history among other great queens like Catherine II of Russia, Elizabeth I of England and Margaret I of Denmark. Known for her wisdom and administrative ability she rebuilt many Hindu temples, offered facilities for pilgrims, and built a new capital at Maheswar on the banks of the Narmada.

On the 31st of May, 1725, Ahilyabai was born in the Ahmednagar district of Maharashtra to a Dhangar village patil Malkoji Shinde. Though she did not go to school, nevertheless her father taught her to read and write at home. Fortune unexpectedly came her way, when the ruler of Malwa, Malharrao Holkar stopped at her village on his way to Pune and saw the 8 year old girl at a temple. Impressed by her piety, he took her home as a bride for his son Khande Rao.  Married in 1733, tragedy struck Ahilyabhai when her husband was killed in the Siege of Kumher fort by a cannonball. Then her father in law Malhar Rao persuaded her to take care of the kingdom -he trained Ahilyabai in administrative and military matters, showing full faith in her abilities, and she did not let him down.

“Proceed to Gwalior after crossing the Chambal. You may halt there for four or five days. You should keep your big artillery and arrange for its ammunition as much as possible….On the march you should arrange for military posts being located for protection of the road.”

The above excerpt from a letter illustrates Malhar Rao’s faith in Ahilyabai, during one of the most tumultuous periods of Bharatiya history.  Malhar Rao passed away in 1766, and though Ahilyabai’s son Malerao took over, he was too weak a ruler and passed away the very next year. She petitioned the Peshwa to allow her to take over the reign of Malwa herself, as she had been fully trained in military and administration matters by then. Though some of the nobles objected to this,  she had the full support of the Holkar army.  On many occasions Ahilyabai led the army herself from the front, armed with bows and arrows on her elephant. The Peshwa granted her permission to rule in 1767, and she was ably assisted by Tukojirao Holkar, the commander in chief of the army and her adopted son too in a way.  With Tukojirao advising her on military matters, Ahilyabai proceeded to rule over Malwa in a wise and sagacious manner.  She never let personal rivalries affect her administration, never observed purdah, held daily durbars and was always accessible to the public.

John Malcolm, a British soldier, diplomat and administrator, in his 1822 book “Report on the Province of Malwa, and Adjoining Districts” had this to say about Ahilyabai Holkar-

“Her first principle of government appears to have been moderate assessment, and an almost sacred respect for the native rights of village officers and proprietors of land. She heard every complaint in person; and although she continually referred cases to courts of equity and arbitration, and to her ministers for settlement, she was always accessible. So strong was her sense of duty on all points connected with the distribution of justice, that she is represented as not only patient but unwearied in the investigation of the most insignificant cases, when appeals were made to her decision.”

Ahilayabai ruled at a time when the whole of Central Bharat was facing power struggles one way or another, as well as intense battles were being fought for the throne. It was to her credit, that during her 30 year long reign, Malwa was never once attacked and remained an oasis of stability and peace.  While Indore developed under Ahilyabhai’s reign into a prosperous trading town,  she also developed her own capital at Maheswar on the banks of the Narmada. She built many temples at Maheswar, a fort, a palace, and repaired many ghats. She also built many forts, roads in Malwa, donated to temples and sponsored many Hindu festivals. She also built many temples, ghats, wells, tanks outside Malwa too all over Bharat.

Maheswar during her time, turned out to be a center for literature and arts.  The famous Marathi poet Moropant, the shahir Anantaphandi, and Sanskrit scholar Khushali Ram were all patronized by her.  The textile industry flourished in Maheshwar during her reign, and the city is still home to the famous Maheswari sari.  She also patronized many craftsmen, sculptors, artistes who made the city their home.  Trade was encouraged in the kingdom, and many merchants, farmers, cultivators rose to affluence during her time.

Ahilyabai treated her subjects like her own children, and invested a lot of money in public works. Trees were planted along roads, wells were dug and rest houses set up for travelers. She reached out to the poor and homeless, gave them shelter and dignity. When the Bhils were harassing the caravans, she talked with them and persuaded them to give up their nomadic lifestyle by granting them land for cultivation. Her daily routine was quite simple – she rose an hour before daybreak to say her prayers, read the scriptures, and distributed alms to Brahmins. After breakfast, she took a short break, and then attended durbar listening to people, settling disputes, taking decisions on administrative matters. A devout Shaivaite, she would mark Shri Shankara on all royal proclamations along with her signature.

While Ahilyabai built and also repaired many temples all over Bharat, some of her more famous works are rebuilding the Kashi Viswanath temple after it was destroyed by Aurangzeb; there is also an Ahilya Ghat at Varanasi as well as the Ahilya Dwarkeshwar temple.  She also repaired the Manikarnika, Dasasvamedh Ghats, and built Dharamshalas (rest houses for pilgrims) in Varanasi.

The Chatri of her father in law Malhar Rao Holkar was built at Alampur in MP along with many temples.  She also built the Treta Ram temple in Ayodhya. From Badrinath to Dwarka, from Omkareswar to Puri, from Gaya to Rameswaram, every holy pilgrimage site in Bharat had a contribution in one way or other from Ahilyabhai Holkar – be it temples, ghats, dharamshalas, sponsoring of poojas. She did tremendous service to the cause of Hindu Dharma.

On 13th August 1795 Ahilyabai Holkar passed away, but her legacy would remain forever, in the form of temples, public works, chattris, dharamshalas. At every major pilgrimage center in Bharat, you will find some memory or other of her work, not to mention Maheshwar itself.

(This article originally appeared as a post on the site https://historyunderyourfeet.wordpress.com. We are grateful to the author, Ratnakar Sadasyula, for granting permission to reproduce it on HinduPost.)