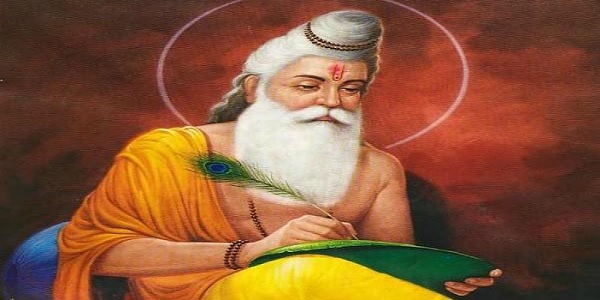 Valmiki Jayanti (also known as Pargat Diwas) is celebrated to commemorate the birth of Maharishi Valmiki – also known as Adi Kavi i.e. the first poet – the author of the world’s oldest epic Ramayana, which along with the Mahabharata forms the Hindu itihasa (history).

According to Ramayana, Maharishi Valmiki is one of the first sages whom Sri Rama visits along with Devi Sita and Sri Lakshmana on his way to Chitrakoot after leaving Ayodhya for 14-years of exile.

The other occasion is when Sri Rama forsook Devi Sita, it was Sri Valmiki who sheltered her in his ashram and provided the support system for her to rear up her twin sons Lava and Kusha. He taught them Ramayana, which they recited in front of Sri Rama in his royal court.

Maharishi Valmiki was born to a sage called Pracheta in the age of Sri Rama – called the ‘Treta Yuga’. The word ‘Valmika’ in Sanskrit means an ant-hill. Once, he performed long years of tapasya (spiritual practise involving deep meditation) while sitting at one spot, so much so that ant-hills formed around him. After he finished his tapasya and emerged from those ant-hills, he got the name of Valmiki.

“Valmiki was not the name that his parents chose for the poet. His real name was ‘Ratnakara’. When he was very young, one day he went into the forest. While playing he lost his way and began to cry. Just then a hunter came there looking for a prey, he saw the little boy and fondled and pacified him. The hunter had no children. So he took the boy with him.

Ratnakara’s father searched for his son all around the hermitage, but could not find him. Finally he and his wife thought that the boy had become the prey of some wild beast. The hunter and his wife brought up the young boy with great love. With time, Ratnakara forgot his birth parents.

Being raised by a hunter, he took up hunting. He became a hunter with a sure aim.

To the birds and beasts of the forest, he became verily Yama, the God of Death. When he came of age, he got married and had children. Thus Ratnakara’s family grew in size. It became very difficult for him to provide food and clothing to his large family. So he took to robbery. He began to attack people going from one village to another, frighten them and to away all that they had. If they opposed him, he killed them.

One day Ratnakara was waiting for a victim. It happened that the great sage Narada was passing that way. When he was lost in joy of singing song in praise of God, suddenly Ratnakara rushed at him. But Narada was no ordinary man. He was not frightened by the loud shouts of Ratnakara. He smilingly explained him all he has an old Veena and the rags that he wore. If he want them, he can certainly take them. Why kill him for these?

Ratnakara was astonished at Narada’s reaction. There was neither fear nor anger on latter’s face but only peace. His cruel mind melted into tenderness.

Narada explained Ratnakara that stealing is a sin. Killing animals is also sinful. Why do he do such evil? To which Ratnakara explained his helplessness to feed and maintain his large family.

On reaching home, he first went to his father and said, ‘Father, I rob people to get food and clothing for you all. It seems that is a sin. Do you not share in that sin?’ His father was angry and said, ‘You sinner, you should not do such bad things. Am I to share your sins? No, never. You have to suffer for what you do.’ Ratnakara went to his mother and said, ‘Surely, mother, you will share my sin, won’t you?’ But she also scolded him and sent him away.

He then went to his wife and said, ‘Do you know how I earn to provide you and your children with food and clothing? It is by robbery. But I steal for your sake. Therefore you are also partners in my sin. Isn’t that so?’ The wife was displeased and said, ‘What are you saying? What have we to do with your sin? You are my husband, and my children are your children. It is your duty to look after us and give us food and clothing.”

Ratnakara faced the reality and realized that he alone was responsible for all his sins no one else would share his sin. As soon as it was clear to him, he ran to Narada. He untied the sage and amidst weeping, narrated to him all that had happened in his home. Falling at Narada’s feet he asked the sage about the remedies to atone for all the sins he had committed.

Ratnakara continued his ‘tapas’ chanting the name of Rama. His eyes were closed. His whole mind was concentrate on the chanting of the name of Sri Rama. He forgot his existence. He had neither food nor sleep for days and days. And in this way quite a few years passed. An ant-hill grew all around and above him. He could not even be seen by anybody.

At last one day Narada muni again came that way. Of course, he knew that Ratnakara was inside the ant-hill. Very carefully he cleared that ant-hill still Ratnakara was wholly lost in his ‘tapas’ and did not wake up to the world around him. Narada chanted the name of Rama in his ears. Then he came back from his tapas.

Ratnakara felt new life flowing through him. Narada muni told him that now he is a sage of the highest order, a Brahmarshi. As he was reborn from a Valmika (the ant-hill), here after be famous as Valmiki.”

However, this story about Maharishi Valmiki being a dacoit seems to be just a legend which has grown over time. If one reads the following verses from Valmiki Ramayana, Uttar Kanda, the Maharishi himself says to Sri Rama “I do not remember having spoken untruth…No sin has been committed by me formerly in mind, speech or action”. Surely, not the words of a dacoit. 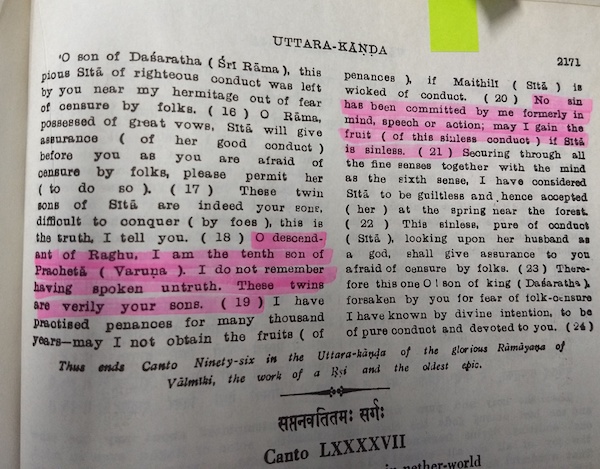 A judgement given by Justice Rajive Bhalla of the Punjab and Haryana High Court in the year 2010 regarding the legendary story said that, “actual facts appear to be lost in the mists of antiquity.” Referring to the research done by the head of the Maharishi Valmiki Chair of the Punjabi University, Patiala, Manjula Sehdev, the judge said that “from Vedic literature up to 9th century CE, there is no reference as such that Maharishi Valmiki led a life of a dacoit or highwayman.” It was also stated that in his own work ‘Ramayana’, Maharishi Valmiki is called Bhagwan, Muni, Rishi and Maharishi and no reference of his highwaymanship is available there.

It is said that Narada muni met Maharishi Valmiki and told him the entire story of Sri Ramachandra.  Some time later, Maharishi Valmiki, on the bank of river Tamasa, was observing the surroundings and visualized a pure and pious man’s mind reflected in the clear waters.

Then he saw a pair of herons mating and felt very pleased on seeing the happy birds. In the next instant, a hunter killed one of the birds, and its mate screamed in agony and died of shock.  Valmiki was pained and enraged on seeing this and cursed the hunter. However, this curse came out of his mouth in the form of a ‘shloka’, a perfectly metrical composition, which surprised the sage himself. This particular Shloka is thought to be the first verse ever created in this world. 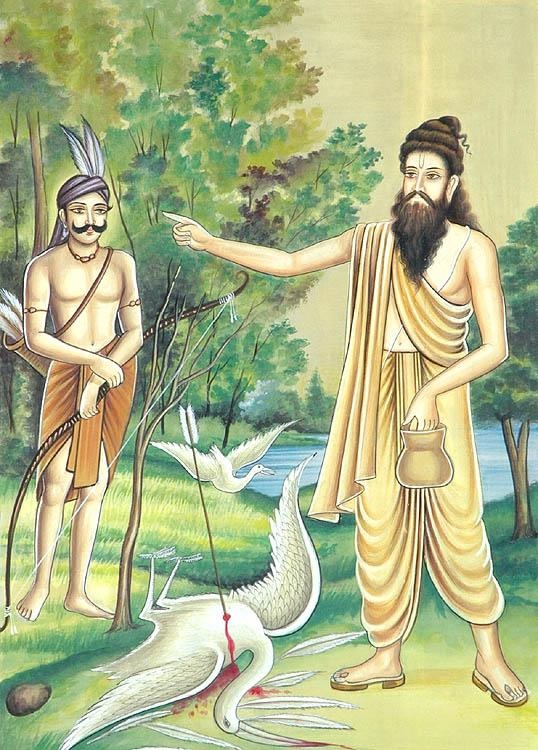 The Shloka went as follows:

“You will find no respect or rest for all of eternity,

because you have killed an innocent bird in love.”

The sage had turned into a poet.

Bhagwan Brahma appeared to him and commanded him to compose an epic poem on the story of sri Rama as he had heard from Narada muni. He also gave him the boon of the visions of all the incidents and the revelation of all the secrets connected with the story. Accordingly, Maharishi Valmiki composed the epic, and named it Ramayana – the way or the conduct or the life story of Rama.

Naman (homage) to the AdiKavi Maharishi Valmiki who told us the story of Sri Rama.