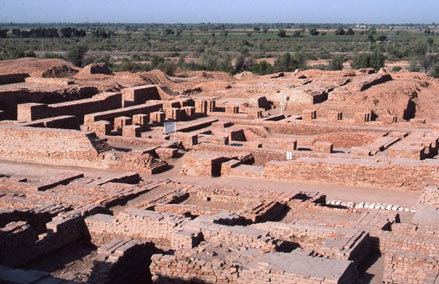 New findings from the 6000 year old Rakhigarhi site of the Sindhu-Saraswati civilization (also called as Indus Valley civilization by Western Indologists), have shown that the knowledge ecosystem in the Vedic era was guided by fully indigenous people with limited external contact.

The lead researchers at the site — lead archaeologist Vasant Shinde and DNA scientist Neeraj Rai — told Economic Times (ET) that the DNA study of the skeletal remains found at Rakhigarhi, Haryana, shows no Central Asian trace, and that the manner of burial is quite similar to the early Vedic period, also known as the Rigvedic Era.

Shinde told ET: “This indicates quite clearly, through archeological data, that the Vedic era that followed was a fully indigenous period with some external contact.” The pottery, the brick type used for construction and the general ‘good health’ of the people ascertained through the skeletal remains in Rakhigarhi, he said, pointed to a well-developed knowledge system that evolved further into the Vedic era. The study has, in fact, noted that some burial rituals observed in the Rakhigarhi necropolis prevail even now in some communities, showing a remarkable continuity over thousands of years.

These findings mean that the Aryan Invasion Theory (AIT), which says that a superior civilization of ‘Aryan’ (Central Asians/Steppe people) invaders brought chariots, Vedas and Vedic way of life to Bharat, is incorrect. The Rakhigarhi findings show that Vedic evolution was through indigenous people, even if there was greater admixture with Steppe people due to bi-directional migration at a later period.

Vasant Shinde , who is the vice-chancellor of the Deccan College, Pune, was the lead archaeologist in the study while Rai, who is the head of the ancient DNA laboratory at Lucknow’s Birbal Sahni Institute of Palaeosciences, did the DNA study.

“According to Rai, the evidence points to a predominantly indigenous culture that voluntarily spread across other areas, not displaced or overrun by an Aryan invasion. “The condition of the human skeletons, the burial…all show absence of palaeo-pathology symptoms which could indicate ailments due to lack of medical care. The persons here were healthy; denture morphology showed teeth free of any infection; bones are healthy, as is the cranium,” Rai told ET.

He also discounted the notion of any violent conflict. “There are no cuts and marks which would be associated with a population subjected to warfare. All this indicates that the people were receiving well-developed healthcare and had full-fledged knowledge systems.” The excavations in Rigvedic phase, he said, corroborate this. “This points to greater continuity rather than to a new Aryan race descending and bringing superior knowledge systems to the region,” Rai said.

The Rakhigarhi study, he said, while showing absence of any Central Asian/Steppe element in the genetic make-up of the Harappan people, does indicate minor traces of Iranian strains which may point to contact, not invasion.

The Aryan invasion theory holds forth that a set of migrants came from Central Asia armed with superior knowledge and arms and invaded the existing settlements to establish a more sophisticated civilisation in Bharat and pushed the original inhabitants down south.

Rai disclosed that 148 independent skeletal elements from Rakhigarhi were screened for the presence of DNA molecules at the Centre for Cellular and Molecular Biology in Hyderabad. Of the 148 skeletal remains, only two samples yielded any relevant DNA material.”

Rakhigarhi is the biggest Saraswati-Sindhu civilisation (SSC) site spread over 550 hectares, about double in size than the Mohenjo Daro site, which was considered the biggest site till now. The oldest SSC site found till now also lies in Haryana – Bhirana village in Fatehabad district, which has been dated to 7570-6200 BCE.

As reported earlier, archaeologists at Rakhigarhi have found evidence of massive manufacturing and trade activities in this town, which revealed the economic organisation and the foreign links of people here. They had trade links with people in Rajasthan, Gujarat, Baluchistan and even Afghanistan.

Interestingly, just recently ASI unearthed remains of chariots dating 2000BCE in Sanauli, near Delhi, showing presence of a sophisticated warrior class in the Bronze Age. This further strengthens the argument that chariots were not something brought by ‘invading Aryans’ around 1800-1500 BCE as AIT-proponents insist, but existed well before that in Bharat.

Not just Saraswati-Sindhu, similar civilizational discoveries along Ganga & in Odisha

Last year, artefacts of a 4,000 year old civilisation from the Copper Age were found in Odisha. In 2016, a detailed study conducted by IIT-Kharagpur found that Varanasi has been a continuous human settlement since over 6000 years ago.

These two tweets put all these recent discoveries in perspective –

Bronze/Copper Age civilization were more widespread across India than previously thought. We have found many sites in the Gangetic plains in recent decades. Now we are finding them in Odisha!! So it wasn't just Indus-Saraswati basinhttps://t.co/enBy78LxLM

Quick note on why the Rakhigarhi discovery might be important:

Don't be misled. The simplest, most concise, and correct definition of the so-called Aryan Invasion Theory comes from the theoretical physicist @indianinterest, and it is this: pic.twitter.com/k5euIb2U65

It is indeed high-time that the outdated and scientifically untenable Aryan Invasion Theory (AIT), first postulated by racist Indologists like Max Mueller and which is still taught in schools and colleges, is junked and our children are taught an undistorted version of history.