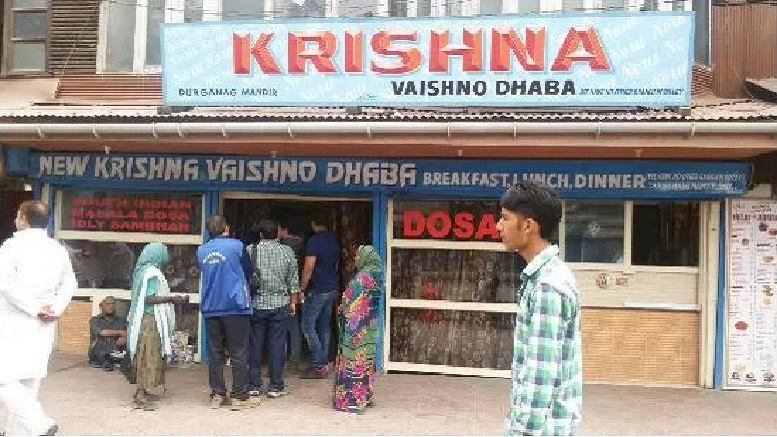 Out of very few Hindu centric eateries left in Kashmir Valley, Krishna Vaishno Dhaba was a popular one, enjoying loyal patronage from both local Muslims and Hindu tourists. On 17th February, the terrorists from a banned Islamic extremist organization shot Akash Mehra, son of the Dhaba owner in Durganag area of Srinagar. The terrorists purportedly belonging to ‘Muslim Janbaaz Force’ declared that the dhaba owners are ‘non-locals’ and hence did not deserve to be in the valley. This happened even when Srinagar is being visited by a delegation of various nations to have first-hand experience of development in Kashmir.

The 22-year-old injured youth, Akash Mehra, helped his father Ramesh Chandra, in running the dhaba which was started in 1984. Ramesh Chandra, who belongs to Udhampur district of Jammu, had never given up on his business even during the peak of terrorism and exodus of most Kashmiri Hindus during the 90s.

On the fateful Wednesday evening, at around 7:20 pm, Akash Mehra was shot in the chest at Dalgate area which is very close to where the international delegation is stationed. According to eye-witnesses, the unidentified assailants who were in an auto, fired 3 times at Akash and twice more while escaping. Akash, who was critically injured in the attack, was immediately rushed to Maharaja Hari Singh hospital where he is being treated. The assailants managed to escape after the attack but later, the terrorist organization identified itself as perpetrator of the dastardly act. In the statement, they alleged that ‘outsiders’ do not deserve to be in valley and will be forced out.

Incidentally, this is not the first such attack by Islamic terrorists this year. Just last month, Satpal Nischal, a 70-year-old jeweler by profession, was shot dead after he obtained nod for domicile in Kashmir, having spent 4 decades there. In a Facebook post, ‘The Resistant Front’, a motley gang of remaining terrorist organization members, claimed responsibility for that deadly attack. In their post, they asserted that the new domicile law was ‘unacceptable’ and that it would treat all other than the indigenous Kashmiris who acquire property in J&K as ‘occupiers’. The terror outfit sent a dire warning that there is “More to come.”

Despite such repeated attacks against ordinary Hindu citizens of Kashmir, no prominent national politician ever visits and supports the aggrieved families. Many do not even bother to tweet about it or mention the hardships endured by real Kashmiris who, despite decades, rather centuries of persecution, refuse to give up on their ancestral land and faith. Lets hope the trend will change before it is too late.