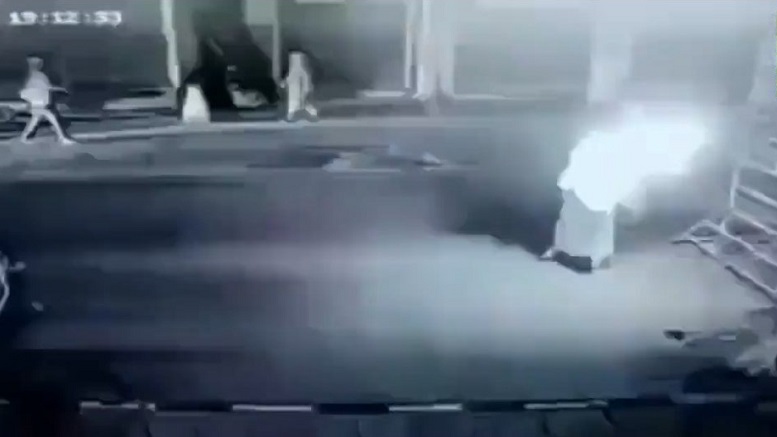 On March 29, a woman wearing a burqa was caught on camera hurling a petrol bomb at a Central Reserve Police Force (CRPF) camp in Kashmir’s Sopore district. Yesterday, Kashmir police confirmed that one Haseena Akhtar has been arrested for this terror act.

Security cameras recorded the burqa-clad person carrying something and pausing in the middle of the road. Akhtar took out a petrol bomb, lit it with a lighter, and hurled the molotov cocktail toward the CRPF camp. For a moment it seemed like it would ignite in her hands but she managed to throw it, just in time.

People walking along the road ran away, and so did the accused who escaped. Security personnel immediately came out of the bunker and extinguished the fire with buckets of water. Fortunately, there were no casualties but one CRPF personnel and a police officer were reported injured, and the area was cordoned off.

Inspector-General of Police, Kashmir, Vijay Kumar confirmed that a manhunt was launched and added that the terrorist had been identified and will be detained, soon. By Thursday, March 31, police confirmed that they had arrested the accused. The IGP confirmed that Akhtar was an Over Ground Worker (OGP)

She was identified as Haseena Akhtar, wife of Mohammad Yousuf from the village of Sheeri Baramullah, 25 km southwest of Sopore. The IGP added that she was arrested on several occasions in the past for indulging in anti-national activities. She has several cases registered against her.

Akhtar came in contact with the pro-Pakistan separatist Asiya Andrabi, back in 2008. Andrabi is currently in jail for her involvement in terror funding cases. She is the founding leader of Dukhtaran-e-Millat, the separatist wing of the Hurriyat Conference in the Kashmir valley. The National Investigation Agency (NIA) is probing Andrabi’s case.

In 2019, Akhtar was caught sticking posters for the terrorist outfit, Lashkar-e-Taiba (LeT). She was again arrested last year for indulging in anti-national activities but was given bail last December.

Why are jihadis with multiple cases against their names under the Unlawful Activities Prevention Act (UAPA) still roaming freely, is something that our courts might be able to tell us. This is also exactly why burqas are considered potential security threats and are banned in many countries.

Akhtar’s husband Yousuf is also a terrorist. He was arrested under the Jammu and Kashmir Public Safety Act (PSA) for throwing projectiles at our security personnel. That was in 2016 when Yousuf was jailed for 17 months.

This was the second incident of explosives being hurled at a CRPF camp in the Kashmir valley in the last 10 days. A jawan was injured earlier in March when terrorists attacked the Babapora CRPF camp with a grenade. Back then, three terrorists were arrested by the police. It now seems like the terrorists are also using their burqa-clad women cadre, for subversive activities.