Exclusive : Bengaluru Church converted 1000s of children in orphanage, got crores from USA! 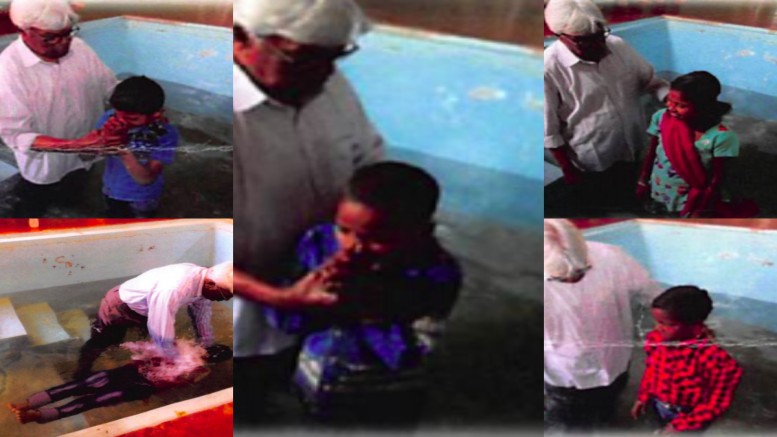 According to a report in Bangalore Mirror, recently five children were rescued by the Childline from Shalom Biblical Baptist Church ministries situated in Chikkabellandur area of Bengaluru. These children were being kept in their custody illegally. The Childline team found this on the basis of directions from the Juvenile Justice (JJ) Board. The children, 14 in number, were living on the premises. Aged between seven and 16 years, 4 girls and 1 boy, were living there without a woman caretaker, which is mandated by law.

The orphanage is not registered and had no permissions to operate. However, the story is much murkier. This organisation, a Christian church, runs a Theological Seminary(college to train Christian priests) and also does “outreach” i.e. converts people from the society, apart from the conversion of children in their orphanage. This has been going on at least since 2002 with funding from WORLDWIDE NEW TESTAMENT BAPTIST MISSIONS,  based in North Carolina, USA.

Missionary work is family business for Ramesh and Christina Kumar, who run Shalom Biblical Baptist Church ministries. Ramesh Kumar was converted by an American missionary when he was 16. Conversion was quite beneficial for Ramesh, whose son Enoch completed his studies from USA in Theology.

Enoch got married in 2001 in another Baptist missionary family, the ones who run Shakinah Biblical Baptist Church Ministries, which is again a conversion shop funded from USA. Now they have kids – “third generation missionaries”, who would no doubt enter this lucrative business.

We shall focus only on the Shalom Biblical Baptist Church ministries, run by Kumars and not talk of the Gurupatra family run Shakinah Biblical Baptist Church Ministries. The purpose is to show that how much a single such missionary organisation is able to achieve and how much support they get. The receipt of Foreign donations by Bharat based organisations have to be filed with the government and the data has been made publicly available by the government. One can go here and not only verify this data, but also check activities in own district and state.

Shalom Biblical Baptist Church ministries is funded by Worldwide New Testament Baptist Missions of USA. The data of years, from 2007 to 2021, for this organisation has been given below:-

Curiously, the sudden fluctuation in 2010-11 and 2012-13 is also co-terminus with the US visit of Enoch for receiving Doctor of Theology degree. In other years, the flow if funds is more or less consistent with a total of approximately Rs. 3.75 crores flowing into Bharat. However, the data available only since 2007, while the Kumars have been in the business with the US based Mission since 1987. One can reasonably surmise that many more crores have been spent in Bharat during that period.

It must be mentioned here that this is not the only church that Worldwide New Testament Baptist Missions of USA supports in Bharat. Then, there are other foreign organisations with their own churches to fund in Bharat.

The work they do

We have discussed the persons behind it and the finances. Now coming to the most important part – the work done by these missionaries. Fortunately, we have records of their activities in their reports they regularly sent to their US masters. We have given the summary of these letters below :-

Please keep in mind that orphanages had to abide by new rules in 2015, under which Missionaries of Charity of Mother Teresa had to close 13 orphanages as now orphanages could be run only by secular organisations. The Kumars continued running their illegal operations after this.

We have left some letters/reports due to repetitive content. One thing that we have left out in the above summary is the constant begging for money from USA. Also note that everywhere they have shown the map of Bharat, it is incomplete as Aksai Chin and PoK are not shown as part of the country. It is also notable that Kumars are demonising Hindus openly, which is actually in consonance with their bigoted doctrine.

The above summary reveals that thousands of people have been converted using foreign money by Kumars, in their illegal orphanage. Apart from this illegality of running an orphanage without permission, the use of foreign donations for religious conversions is banned according to Section 12(4) of the Foreign Contribution Regulation Act. Clearly, they were using this money for conversion, else why would they mention the same so prominently in their reports?

Sadly, this is the story of thousands of such churches in Bharat who get thousands of crores in foreign money every year. It is time the government took substantial action against such churches and directed the officer to be vigilant. Hindu civilisation is under attack at a thousand fronts. Only decisive collective action can save us. Supporting of organisations that have the capacity to turn out literature, and other material to aid conversion into Hindu Dharma and the zeal to convert people back is the only way.