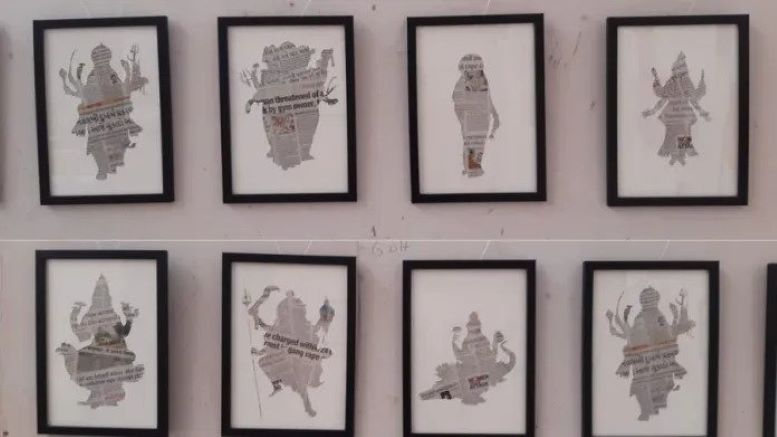 Vadodara’s Maharaja Sayajirao University has been caught in a controversy over its Fine Arts exhibition. As per reports, some students put up objectionable pictures of Hindu deities using paper cuttings that contained news of rapes. Akhil Bharatiya Vidhyarthi Parishad (ABVP) raised objections and demanded the University dean’s resignation.

The annual painting exhibition of the Fine Arts faculty features art works on different topics. However, some of the art works sparked a controversy. According to available information, while a few students used newspaper clippings of rape news to create the art works, others made nude paintings of Hindu Devis and Devatas.

ABVP reached the site to protest against the derogatory portrayal of Hindu deities. They raised slogans and also demanded the dean’s resignation. Furthermore, they have asked the university to take action against the students who put up the art work. ABVP leaders submitted letter to the dean and vice chancellor in the matter.

The letter says using newspaper clippings of rapes to create image of Hindu Bhagwans. This isn’t the first time that the Fine Arts faculty has hurt Hindu sentiments. The faculty had allegedly put up offensive art work earlier too.

“some of the art work for the exhibition in Fine Arts faculty were hurtful to Hindus as the portraits of gods and goddesses were made of newspaper clippings which talked about rapes. If you want to talk and highlight issues of rape, it is fine, but why drag Hindu gods and goddesses? Which is why we are demanding the dean be rusticated. University has assured us that a thorough investigation will be carried out in this case”, noted OpIndia quoting ABVP leader Vajra Bhatt.

Faculty dean Jayram Podwal has denied the charges and said that the images aren’t from the Maharaja Sayajirao University. He further added the University never displays such images.