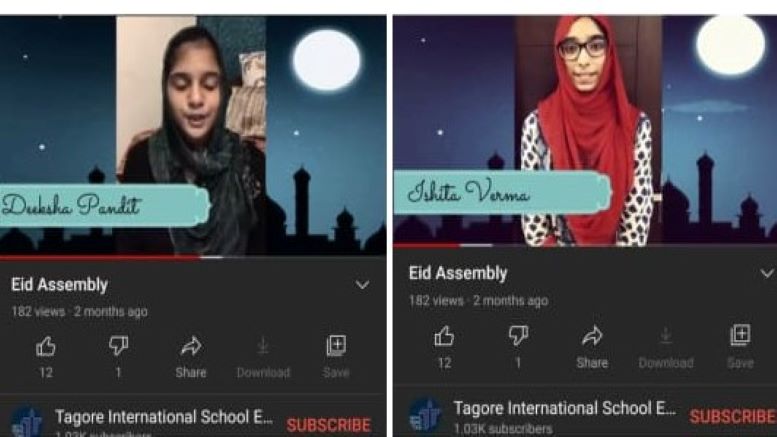 Tagore International School located in Vasant Vihar, Delhi recently held an online assembly on the occasion of Eid where even its Hindu students were made to wear hijab, the Islamic scarf worn by women. Doesn’t this amount to the indoctrination of Hindus and encouragement to convert out of Hindu Dharma in the name of secularism? 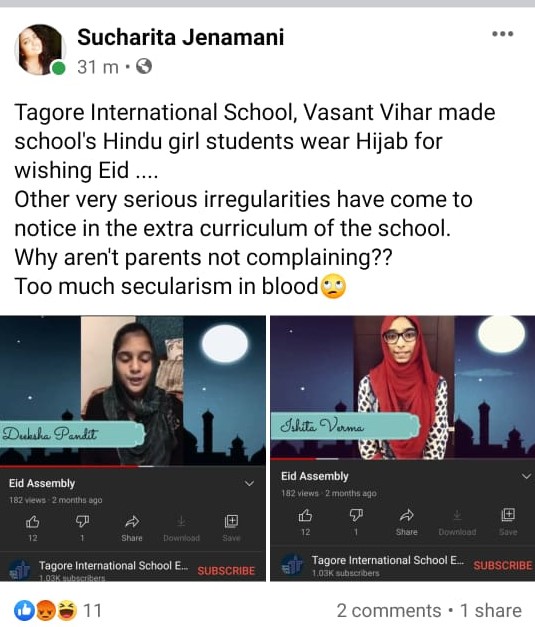 The school uploaded a video on its YouTube page on 4th August 2020 for sending Eid wishes. However, the said video had Hindu girls wishing Eid while sporting the hijab. Two Hindu students identified as Ishita Verma and Deeksha Pandit were made to spout lines about Islam and clearly, they had been tutored for the same.

While Verma told the story of Ibrahim accepting to sacrifice his son on Allah’s command until the angel Gabriel intervened to prevent it, Pandit provided information on the five pillars of Islam. It must be mentioned here that there were Muslim students who took part in the event and sent wishes for Eid as well.

Whether or not Muslim students were involved or not, the fact that Hindus were made to spout these lines and participate in the event smacks of the kind of secularism imposed only on Hindus in order to ensure that the idea of India or communal harmony doesn’t come under threat. And why should Hindu girls wear the “hijab” which is considered a symbol of oppression even in the Muslim world and women in Islamic nations are running free the hijab campaigns?

It is important to realize that these children are at an age where they are molded by what they are thought and it is difficult for them to completely think for themselves. This is nothing but brainwashing using the respect all religions and all religions are the same mask. This type of teaching will certainly deracinate children who are already learning whitewashed history.

Tagore International School, run by BJP leader Sudhanshu Mittal’s sister, is a repeat offender as far as feeding wrong ideas into impressionable minds is concerned. Earlier Opindia had reported how children were being exposed to sessions conducted by Nazariya-Queer Feminist Resource Group. It had even attempted to brainwash children regarding religious conversion using the Hadiya case where Hindu girl Akhila had converted to Islam to marry Shefin Jahan.

Teaching children to respect all genders and their preferred sexual orientation is one thing and filling their minds with unscientific toxicity by calling it education is both undesirable and unacceptable. That high school kids feel proud of this at an age when they barely understand what these terms mean shows the kind of agenda being peddled in keeping with the maxim catch them young.

The chronology of Islamic indoctrination is frightening, to say the least, because first it was presenting a whitewashed version of love jihad using the Hadiya case and then making them wear hijab just to send Eid wishes. This is the kind of propaganda that would make the leftist secular cabal go gaga over.

We can’t emphasize this enough that Bharat and Hindus are facing a flood of anti-Hindu propaganda and exposing them to this kind of toxicity at an age when they are most impressionable and easily fall prey to such propaganda must certainly be objected to.