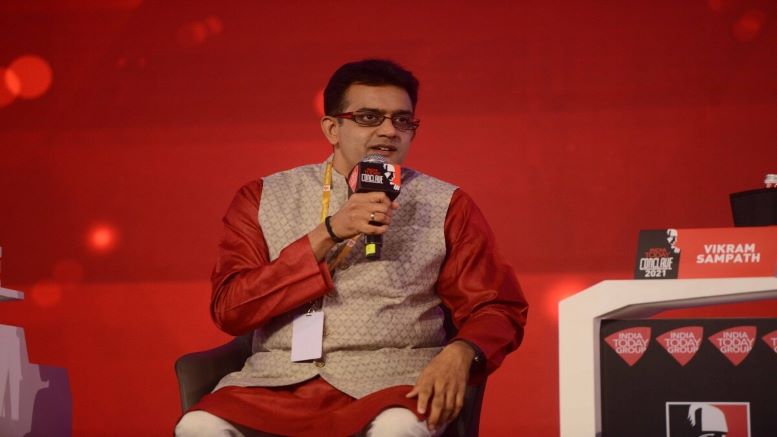 Historian Vikram Sampath, who chronicled forgotten hero Veer Savarkar, has become the target of Abrahamo-leftist bullying using false allegations of plagiarism. There is a malicious attempt, led by Mughal apologist Audrey Truschke, to discredit his work and deliberately tarnish his image.

The attack on Dr. Vikram was initiated by Ananya Chakravarti, Rohit Chopra, and Audrey Truschke who wrote to the Royal Historical Society (RHS) asking for action against the former accusing him of ‘plagiarism’ in his two-volume biography of Hindutva ideologue and freedom fighter Veer Savarkar. Following the accusation leftist foot soldiers, taking a cue from their masters, launched a campaign to slander the award-winning historian. Interestingly, the evidence does not relate to his work but the transcript of a speech delivered by him in 2017 at the India Foundation.

Incidentally, it was only last September that Dr. Sampath was elected as a Fellow of RHS which is the UK’s foremost society working for historians and history. The around 150-year-old organization promotes the vitality of historical scholarship through support for research and publication.

Notwithstanding the fact that Dr. Sampath has taken legal recourse, with the Delhi HC restricting Truschke and others from defaming the historian, there is an urgent need to understand the reason behind this attempt to malign a renowned scholar and why this is problematic, to say the least. The first and foremost reason that the cabal, that styles itself as a ‘champion of academic freedom’, that Dr. Sampath has come under attack is because he has challenged the leftist narrative, a fact that they can’t digest.

They also find it unpalatable that the historian has presented an objective analysis of Veer Savarkar while the left and Congress ecosystem has always sought to malign the freedom fighter. Because they find it hard to counter his objective, fact-based biography of Savarkar that busts myths manufactured by leftist historians regarding the Hindutva ideologue, they have resorted to this malicious campaign to discredit his work.

While on the one hand, Dr. Vikram’s biography analyzes Savarkar in an objective manner, on the other, it also brings out instances of Congress’ treachery against Hindus. One of the main reasons why the Congress ecosystem has run a smear campaign against Veer Savarkar is because the latter never minced words when it came to the betrayal of Hindus by the Congress and Gandhi.

What has rattled the Congress-leftist cabal?

Surely, Dr. Vikram’s work is a body blow to the ecosystem’s carefully crafted narrative with respect to Veer Savarkar. As lawyer and author J Sai Deepak pointed out the motivations behind the attack on Dr. Vikram “Dr. Sampath’s scholarship effectively upsets two Leftist myths – that the Left is the sole repository of scholarship and intellectualism, and that they alone shall decide for the rest of us as to who can be celebrated as icons. Thought Control is the end goal of the Left”.

As Shri Kanchan Gupta has highlighted the leftist cabal is rattled and hence has chosen to throw muck at him as they have often done in the past.

The hounding of Sampath is a reminder of the othering of eminent historians like Shri Sita Ram Goel, Shri RC Majumdar, Shri Ram Swarup, and others whose works were discredited by attaching labels to them.

It is worth quoting Sandeep Balkrishna who writes how RC Majumdar was targeted by Nehru and his lackeys:

The precedent for slaughtering historical truths was set because Majumdar had declared that he would critically examine the roles played by Mohandas Gandhi, Motilal and Jawaharlal Nehru in the Independence struggle. This was a taboo and would certainly infuriate the first and more crucially, the socialist Prime Minister Nehru. In the words of Dr. N.S. Rajaram, “What was Majumdar’s crime? He refused to bend history to suit the interest of the Congress.” [vi] Thus, the stage was set for rampant historical distortions at the hands of Marxist pamphleteers for the next fifty-odd years at all levels: school to the university. The distortions remain even as we speak.

Thus came about the systematic marginalisation and banishment of a towering historian, scholar and patriot which went hand in hand with the construction of a Marxist Grand Narrative of Indian history that was elevated to vile levels and has come to be the mainstay of not just our history but our public discourse.

Our Marxist stenographers and pen-pushers wearing the makeup of historians would have correctly remained in the fringes — like the Holocaust deniers in Europe — had honest scholars like R.C. Majumdar not been shunned and hounded out solely because they didn’t agree to become Nehru’s slaves. This also reveals the truth about the person of Jawaharlal Nehru: that he felt threatened by an honest assessment of one of the most important episodes of India’s long history.

The main aim of the leftist bullies is to make an example of scholars like Dr. Vikram Sampath and Sanjeev Sanyal so that no one dares to challenge their narrative. For long Nehruvian Marxist historians have presented themselves as the sole custodians of Bharatiya history as is evident from RC Majumdar’s story.

However, Bharat has taken the first step towards challenging the Nehruvian Marxist propaganda and in that context, this battle in a way signifies the loosening of the leftist stranglehold on Bharat’s history. With time more such scholars are bound to emerge who would present the facts as it is and not from an ideological prism. That Dr. Sampath refused to bow down to the cabal’s pressure tactics symbolizes a new Bharat that is ready to tell its real story and not the fabricated sanitized versions that leftist historians have been shoving down the throats of the people.