Yet another desecration – now, Sri Subrahmanya murti’s hands cut off in Rajahmundry 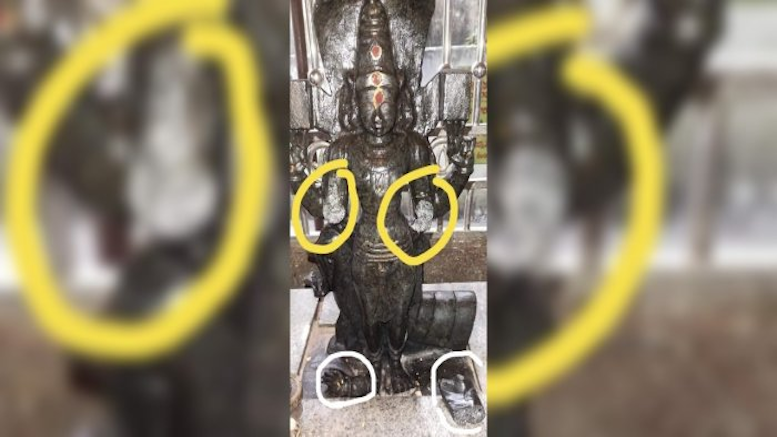 Just days after the decapitating of a Sri Rama murti in the famous Kodanda Rama temple near Ramateertham in Vizianagaram district, the two arms of a Sri Subrahmanya murti have been cut off in a Vigneshwara temple in Rajahmundry district.

As per a report in Deccan Herald –

Rajahmundry is in the same East Godavari district as Antarvedi where the decades old wooden chariot of Sri Lakshminarasimha Swamy was gutted under mysterious circumstances in September.

….The unabated acts of vandalism, desecration at various temples across Andhra Pradesh since January last year, has left the Hindu devotees and organisations distraught. Shockingly, the Subrahmanya idol was vandalised even after Chief Minister Jaganmohan Reddy, according to a CMO statement on Thursday, warned of stringent action against the temple miscreants.

However, opposition parties are accusing the Reddy government of a disregard towards Hindu traditions and institutions which they say is encouraging such malicious acts.

“Attacks on temples has become a daily occurrence, because of the government’s indifference. Neither the public nor the gods inside the temple are safe in the state. Matters would not have come this far if stern action was taken in the first such case. The government has the responsibility to safeguard the sentiments of all communities,” former CM Chandrababu Naidu remarked while condemning the Rajahmundry incident on Friday.

TDP sources said that Naidu would be visiting Ramatheertham on Saturday.

Naidu rued that the offenders in Antarvedi and theft of silver lion figurines of Vijayawada Kanakadurga chariot cases are still unknown. Following the religious sensitivity and protests led by BJP, Hindu organisations, the Reddy government referred the Antarvedi case to the CBI.

The AP police are yet to make any arrests in the Ramatheertham case too even after the CM directed the police to ensure swift, strict action, to prevent recurrence of such incidents at temples.”

As per one estimate there have been 120 incidents of murti desecration in the last 1.5 years since the Jaganmohan Reddy government was sworn in. Locals suspect the vandalism in the Vigneshwara temple could also be the act of New Years revellers.

Rajhamundry is an important religious-cultural centre for Hindus, and it also falls in  coastal Andhra which has now emerged as a hub of aggressive Christian evangelisation. The Christian conversion lobby has been energised ever since the election of Jagan Reddy, a devout Christian whose close relatives themselves are powerful proselytisers.