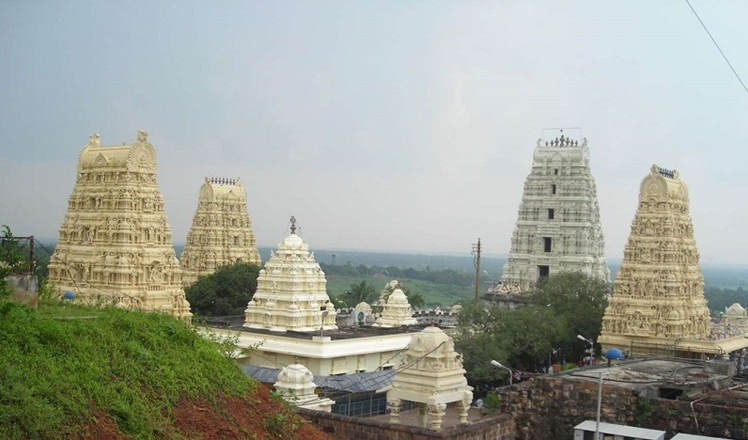 Venkateswara Temple is a Hindu Vaishnavite temple situated in the town of Dwaraka Tirumala of West Godavari district of Andhra Pradesh,Bharata. The temple is dedicated to Bhagwan Venkateswara, an incarnation of Vishnu. The temple is also known by other names like Chinna Tirupati meaning small Tirupati.

This pilgrimage centre is called ‘Dwaraka Tirumala’ after the great saint Dwaraka who located the self manifested idol of Sri Venkateswara after severe penance in a ‘Valmikam’ (ant hill). The devotees call Sri Venkateswara as Kaliyuga Vaikunta Vasa. This place is also called ‘Chinna Tirupati’.

As per the Shastras, North Bharatiya rivers like Ganges and Yamuna are considered to be more and more holy as they go up to the origin and south Bharatiya rivers like Krishna and Godavari are more and more holy as they go down the river to its mouth to the Sea. It is why there are numerous shrines and holy bathing ghats, at close intervals, on both sides of the great grand rivers Krishna and Godavari in their lower regions.

The region covered by Dwaraka Tirumala is commanding the top most conspicuous position in Bharat, being garlanded by these two great Bharatiya rivers Krishna and Godavari, as pointed out by Brahma Purana.

Dwaraka Tirumala is a famous temple from ancient times. According to some Puranas, the temple is popular even in Satya Yuga and is still attracting the devotees. According to Brahma Purana, Aja Maharaja, the grandfather of Sri Rama also worshipped Bhagwan Venkateswara for his marriage.

On his way to the swayamvaram of Indumati, he passed by the temple. He did not offer prayers in the temple. The bride Indumati garlanded him, but he had to fight a battle with the kings who came to the swayamvaram. He realized that the battle was thrust on him for ignoring the temple on the way. After realizing this, Aja Maharaja prayed to Bhagwan Venkateswara. Suddenly the kings stopped the battle.

It is a great wonder to see two main murtis under one Vimana Sikharam. One murti is a full and complete statue. The other is a half statue of the upper portion of the form of the Bhagwan. The upper portion of the form is a self-manifested idol located by Sage Dwaraka. The saints of the yore felt the prayers to the Bhagwan are not complete without worshipping His holy feet. So, the saints joined together and installed a full statue behind the self-manifested idol, to worship the feet of the Bhagwan according to Vaikhanasa Agamam.

It is believed that the prayers to the smaller murti of the Bhagwan will lead to Moksha, and the big form stands for Dharma, Artha and Kama. The Thiru kalyanotsavam is celebrated twice a year. One for the self manifested idol in the month of Vaisakha and the other for the installed idol in the month of Ashwayuja. The magnificent monuments like, Vimana, Mantapa, Gopura, Prakara etc., stand to the credit of Dharma Apparao  (1762 – 1827) and the golden ornaments and silver vahanas stand to the credit of the generous queen Rani Chinnamma Rao of Mylavaram, Krishna Dist. (1877 – 1902). These things immortalize the glory of the shrine.

The main temple is a masterpiece of South Indian Architecture with its five-storied main Rajagopuram facing the south and three other gopurams on the other three sides. The Vimana is in the Nagara style and old Mukha Mandapa is extended to a great extent to suit the present day needs. There are several temples of Alwars attached to the Prakara on all sides. The whole spacious compound has been paved with stone and flower trees are grown in an order as if to feast the eye of the pilgrims. There are other shrines in the temple such as Anjaneya Swamy,Garuda,image of Rishi Dwaraka and image of Sri Tallapaka Annamacharya.

1. The presiding deity Bhagwan Venkateswara is visible up to the bust size and the lower portion is imagined to be in the earth. The holy feet are said to be offered to Bali Chakravarthi in Patala Loka for his daily worship.

2. The most peculiar aspect here is that the hill appearing to be a serpent in form, even to the naked eye, confirms the mythological version that Anantha, the serpent king has taken up this terrestrial form of serpent hill and is carrying Bhagwan Mallikarjuna on the tail and Bhagwan Venkateswara on the hood thus creating a happy and harmonious compromise of Vaishnavism and Shaivism at a single place.

3. Two murtis are present under the Vimana Shikaram which is unusual since most temples have one presiding deity.

4. No abhishekam is done for the ant-hill where the rishi Dwaraka performed the penance otherwise the ants will crawl out.