The tradition of Navreh & Navratri in Kashmir 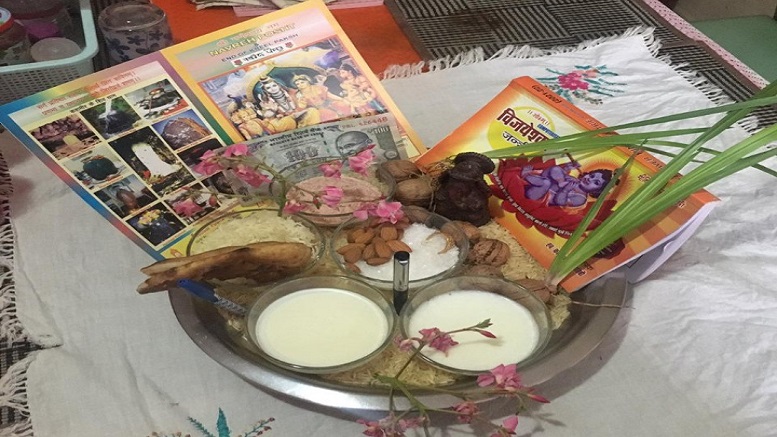 These are the days of ”Navratras”. It would be prudent to debate the significance of the Navratas in a historical and cultural context. Indian subcontinent comprising the areas from Kandhar and Kabul to Dacca and Rangoon and from Tibet to Sri Lanka is a hub of the greatest and richest civilization in the world. It is invariably a unique chunk of land that has its own existence, history and geography. While its history dates back to around ten thousand years, there is more than five thousand years of documented and written history of this civilization.

The mainland India (Bharat) has been the centre of the civilizational and cultural flow of the whole subcontinent from the times immemorial. Besides the documented history, the tradition and customs form a significant part of the cultural and civilizational aspects of the history of the land. In this context, the usage of almanac (calendar) by the people play an important and significant role.

Bharat has one of the oldest calendars (almanac) in the world. It is called the Yugabd Samvat and was started immediately after the Mahabharatta war. It commensurate the change of era (Yug-Parivartan i e. the start of Kaliyug). On this 2nd April, Yugabd Samvat-5124 began. However, in Kashmir valley, the scholars and rishis of the land found an indigenous almanac 26 years post the Yugabd Samvat. This almanac is known as the Saptrishi Samvat, and it is 26 years younger to the Yugabd Samvat.

On the same day, the 2nd April 2022, the Saptrishi Samvat-5098 also began. These two Samvats (Yugabd Samvat and Saptrishi Samvat) are the oldest contemporary almanacs in the world. This narration of facts also recognises the importance of Kashmir as the centre of knowledge, culture, civilization, astronomy and tradition.

Besides the two oldest almanacs that are in vogue for the last five thousand years, there are two other functional almanacs also in use. They are the Vikrami Samvat and the Shalivahan-Shaka Samvat. The first day of the year of all these almanacs is called the first Navratra. In Kashmir, the first Navratra is called Navreh (the new flame). Kashmir has a very distinct tradition of Navreh and it is celebrated with the pious sight (darshan) of “Thaal” early in the morning.

The Hindus of Kashmir (Kashmiri Pandits) have a unique and wonderful tradition of thousands of years of “Thaal-Barun” that they observe on the last day of the year (both Solar as well as the Lunar year). The next morning, that is the first day of the new year (both solar as well as lunar), the first thing that they do is to have the ‘Darshan’ of the ‘THAAL’. It is not only considered auspicious but is also deeply connected with our day to day life requirements and obligations.

The preparation for this “Thaal” is called “Thaalbarun” which is done one day prior to Navreh in the late evening so that it is ready for ‘darshan’ on the next morning. All important things that are used in daily life are symbolically decorated on a ‘thali’ filed with rice. In fact, this “Thaalbarun” is done on two occasions, so it is important to understand the correlation of Thaalbarun  of these two occasions i.e, “Navreh” & “Sonth”.

Navreh is the Ist day of the new year (Hindu calendar-Lunar) which starts from ‘Nav-varsh Pratipada’ that is Chaitra Shukla-Pratipada. Kashmiri Pandits in particular observe this day also as Ist Vasant Navratra. We already know that this year Navreh (Nav-varsh Pratipada) fell on 2nd April, 2022. Therefore, the Navratas also began the same day. During the Navratras (nine-day festival of Goddess of supreme energy) starting from Navreh, people observe complete vegetarian life followed by fasts during the Navratras and feasts in the end.

The Indian subcontinent has fifty two Shakti-sthal (centres of supreme divine energy) and all are dedicated to the Goddess Shakti. They are like, Kamakhya in Assam, Hinglaj Mata in Baluchistan, Jwala Devi in Himachal, Dacceyshwari in Dacca and so on. These centres of the Goddess Shakti in various manifestations are the places where various physical parts of the Goddess Sati fell. There is one such divine centre in Jammu and Kashmir as well. It is called Chichi-Mata and is situated on a small hillock in district Samba.

However, Kashmir valley had its own Shakti-sthals (seats of divine energy) which are perceived to be very sacred, pious, full of divinity and of great spiritual satisfaction. All these temples and shrines have a great devotional aura attached to them. The main Shakti-sthals of Kashmir valley comprise the following:

Navratas are dedicated to the nine manifestations of Maha-Durga. The Nine manifestations of the Goddess worshipped on each nine-day of Navaratri are nine incarnations of Goddess Shakti. The nine goddesses worshipped are Shailaputri, Brahmacharini, Chandraghanta, Kushmanda, Skanda Mata, Kantyayani, Kala Ratri (Kaalratri), Maha Gouri and Siddhidayini (Sidhadatri) Each of these goddesses has her own seat in the Kashmir valley. The first manifestation, Shailputri, is seated on the banks of river Vitasta (Jehlum) in Baramulla and is considered as a very high seat of divine energy. For a number of reasons, this shrine is in a dilapidated condition nowadays. Thanks to the management of the shrine and the government support, renovation work has started and is also being monitored very well.

Mata Raginya (Kheer Bhawani) has a very special place among the Kashmiri Pandit community and so are her shrines and temples all over the Kashmir valley, Tullamulla being the main seat of the Goddess. The Sharika Mandir on the Hari Parbat has also a great significance among the Shakti-sthals of Kashmir valley.

All families of  Kashmiri Pandits are specially attached and dedicated to one of the following Isht-Devis among the Shakti-sthals of Kashmir valley. These are, Sharika Mata-Hari Parbat, Jwala Mata-Khrew, Raginya Mata-Tullamulla and Bala Devi Mata of Balahama. It needs to be mentioned here that Bala Devi Mata, Balahama has a very special significance among the Khetriya-Rajputs of Jammu and Kashmir since it also being the Isht-Devi of their clan for the last thousands of years. Unfortunately, most of them lost their connection with the shrine after 1947.

The ‘Vasant-Navratras’ that are being observed currently, conclude on the ninth Navratra, which is also the Ram-Navmi. This year it falls on 10th April. People conclude their nine-day fast, sipiritual penance, worship of the Goddess and other religio-cultural usages and customes with the “Nav-Durga pujan” which is also called the “Kanya-pujan”. On this occasion, nine small virgin girls (as the nine incarnations of the Goddess)  are specially worshipped and offered garlands, flowers, towels, Channey-Halwa-Puri and some coins of money, fruits and items of cosmetics.

Thereafter, the festivities and feasts are organised to celebrate the conclusion of the whole “Navratra” festival of nine days that stands inaugurated on Navreh-the first Navratra.