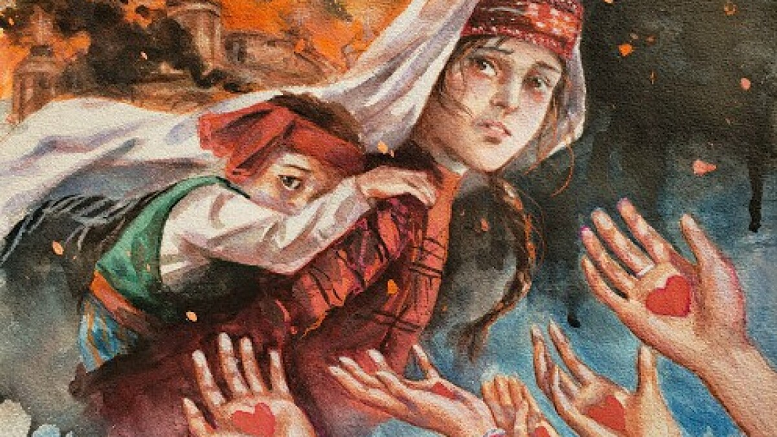 This is a gut-wrenching story of how Muslims treat minorities, even if it is an entire ancient nation.

The first genocide of 20th century was not the Holocaust of Jews by the Nazis in Europe. The first genocide was committed by an Islamic Ottoman Empire from 1915-17 against the ancient Christian nation of Armenia killing 1.5 million Armenian Christians.

What is now eastern Turkey has been historically the homeland of Armenian Christians long before Islam or Turks started living in Turkey. Armenia is an ancient Christian Empire and arguably the first great Empire to accept Christianity as the State religion.

It follows the Armenian Orthodox Church and is one of the most ancient and distinct group of early Christian churches and communities. Their tragedy was that at the top of Fertile Crescent they were at the crossroads of great empires crossing from East to West.

Yerevan, the Armenian capital, is one of the oldest inhabited cities in the world. Armenians used to be pagans before. And even after their conversion to Christianity they retained many pagan customs like their reverence for Mount Ararat, the sacred centre of Armenian culture.

Armenia regularly suffered genocides in its long history after Muslim Turks started spilling into Anatolia and what is now Turkey. After Islamization of neighboring countries it became sandwiched between Shia Islam in the east and Sunni Turkey in the West.

In 19th century eastern Armenia came under Russian occupation, who oppressed them too but Armenian religion was safe under Russia. For Western Armenia, the misery continued under the Sunni Ottoman Empire. Anti-Christian pogroms, rape of Armenian women etc. continued.

In 1896 Ottoman Sultan Hamid II ordered mass massacre of Armenian Christians, killing around 3 lakh of them. It was a precursor of the Armenian Genocide to come. In 1909 the Adana Massacre happened in which 30,000 Armenian Christians were brutally massacred by Turkish Muslims.

In 1908 Turkey had an internal political revolution in which a new crop of Turkish leaders came to rule the country. They were called ‘Young Turks’: famous for their ‘modern’ ideas. They were actually keener to ‘cleanse Turkey’ of minorities to create a ‘pure modern nation’.

At the start of the First World War in 1914 the sporadic massacres of Armenian Christians were about to transform into a systematic genocide. The Armenians were accused of secretly conspiring with the Russian army, which was obviously a false charge.

Facts don’t matter in a society all too willing to blame non-Muslims. Turkish Muslim army incurred military losses against Russia, but while retreating, they massacred Armenian Christians who were Turkish citizens. In this the army had full support of common Turkish Muslims.

Mass massacres of Armenian Christians had started by December 1914. Turkish Muslim state would play death games with Armenians. Armenians would be asked to ‘surrender all arms’. If some did, they would be killed on suspicion of ‘conspiring against Turkey’.

If they didn’t, then they were accused of ‘disobeying Turkish orders’ and would be killed en masse. Van, one of the greatest Turkish cities in the East, and a great center of Armenia experience mass killing of Armenian Christians in early 1915.

When Turkish armies entered Armenian villages to massacre the Christians, men would be instantly killed and women would be raped and kidnapped. Then nearby civilian Kurdish Muslims would converge and kidnap the Christian kids for slavery.

The Turkish Muslim organization which organized the genocide was called Committee of Union and Progress (CUP). (The cruel irony!). CUP hated the possibility of a post-War scenario where it would be forced to grant a state to Armenia in eastern Turkey.

The solution as per the Ottoman Muslim records was: to reduce Armenian Christian population to less than 5%, in their very heartlands, where in many places Armenians were more than 50%! The State agreed that the goal could not be achieved without genocide.

Armenian Christians in the war zone were simply massacred wherever they were. In the peace zone, the strategy was different. The peace zone Armenians were ordered to ‘march towards the Syrian desert’, for they could not be trusted during the war.

Where were they being marched to? To Syrian Desert! A less barbaric Empire might have pretended to send them to a promised homeland, but Ottoman Muslim State was the most barbaric the world has ever seen. There was no pretense. It was genocide and the Turks proudly owned it.

To occupy the homes, villages and entire towns vacated by Armenian Christians, the Turkish State came up with creative solutions. They invited Muslim tribes from all over the Middle East and Caucasus to come and take over the Armenian Christian homes to settle in Turkey.

Muslim tribes from Caucasus like Chechens & Circassians and Kurds from Syria answered the call of Turkey. Islamic hatred of the non-Muslims filled these civilians with unimaginable barbarity and they gladly assisted the Ottoman State in the genocide of Armenians.

As if this was not enough, Ottoman Muslim officers appointed Muslim imams to encourage the migrating Muslim tribes to kill Armenian Christians. There were financial rewards to the Muslims who answered the state’s call and who killed Armenian Christians.

In 1915 the genocide started in earnest. This time Ottomans wanted to save Armenian properties for Muslims so they were not killed in their villages. Instead they were marched to the desert. Men were separated from women and children and were shot first.

These convoys were escorted by Turkish Muslim gendarmes. They would ask Armenian Christians for ransom to escort them, fully knowing that scarcely anyone was capable of actually paying them. Those who could not pay were killed, which meant most of the Armenians.

Transit camps were set to control the flow of killings near Erzindjan. The dead bodies of massacred Armenians would just be dumped in the nearby Kemah gorge. Sometimes they would just be pushed off mountain cliffs. Thousands were killed like this near Lake Hazar.

Armenian Christians were forced to march without food and water. And anyone who collapsed due to sheer exhaustion was shot instantly whether it was a child or a woman. Turkish highways in those times were lined for miles with decaying corpses of Armenian Christians.

Drowning Armenian Christians in lakes and rivers was a favorite method of the Turkish Muslim state. Two men were tied together back to back and drowned, to prevent them from swimming and to preserve the precious supply of resources like rope.

Lakhs were simply killed and dumped in rivers for a quick disposal of dead bodies. All these rivers merged with the mega rivers of Tigris and Euphrates. So many Armenian bodies floated down these rivers that they blocked the rivers and needed to be cleared by explosives.

Thousands of these rotting corpses of Armenian Christians were stuck to the banks of these rivers. And yet so many were massacred by Turkish Muslims that some Armenian corpses traveled more than 2000 kms all through Iraq & ended up in the Persian Gulf.

And like always a few Armenians were converted to Islam. Most Armenians resisted and thus they met such horrible fate. Anywhere where they were more than 5% genocide was preferred by the Ottomans. 99% Armenians of Erzerum were massacred.

15 lakh Armenian Christians were massacred by Turkish Muslims during the two years of 1915-17, almost half of the entire Armenian populations. Only Eastern Armenia which was under Russian control survived such fate.

But almost entire Western Armenia was massacred in one of the most barbaric, horrible and horrifying genocides in the history of humankind. Even the Holocaust was not as thorough. And it was a ‘necessary’ act to create a ‘pure Turkish Muslim nation state’.

This is how a Muslim power treats its non-Muslim minorities: with an absolute genocide. Any non-Muslim minority in any Muslim country can meet this fate anytime. Events unfolding in Bangladesh vis-à-vis its Hindu minorities are moving in similar direction.

All are real pictures of the genocide.

This article has been compiled from the tweet thread originally tweeted by Pankaj Saxena (@PankajSaxena84) on June 15, 2022.