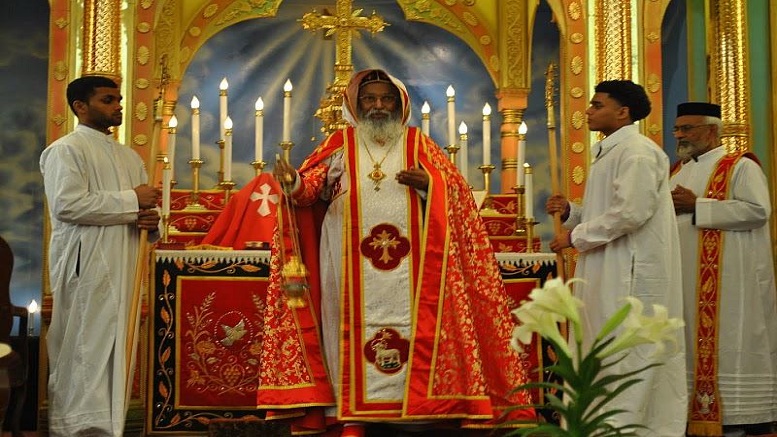 Kerala’s Christian community is fighting each other on the streets, with hundreds of supporters physically challenging each other and attacking the police.  The adherents of Jacobite and the Orthodox sects have created nuisance after a Supreme Court verdict that ordered the state government to take over churches belonging to Jacobites and hand them over to the Orthodox sect.

The government has not implemented the order and people are on the streets. The Manarcad church which belongs to the Jacobites should have been given to Orthodox sect, but CM is chairing a meeting to find an amicable settlement, even after the court orders. Needless to say, the meeting failed.

According to Church, the first wave of Christians reached Kerala during the first century with Thomas (doubting Thomas) and his entourage. They say that the missionaries landed in Kodungallur and converted many. However this is a fake made up story to push the Christian claim in Bharat to antiquity. The story also guilt trips Hindus by saying that Brahmins killed Thomas near Mylapore, Chennai. The truth is that Portuguese destroyed a Shiva temple and constructed a Church at its place in Mylapore!

Christianity probably came to Kerala sometime in 3rd or 4th century with one Thomas of Cana, possibly some Arab Christian. The liberal and tolerant rulers (at that time) let them thrive and even granted them land to build their places of worship. This is the start of Syrian Malankara Church in Bharat.

What is the issue?

The Malankara Church is now divided in two communities since early 20th century. The Jacobites say that the authority to administer Church rests in hands of  the Patriarch of Antioch, who is based in Damascas. It must be noted that there are at least 5 Patriarchs of Antioch named by various sects within Christianity! The Orthodox have a localized approach and are led by the Metropolitan of Malankara, based in Kottayam.

Kerala Malankara Christians thus separated themselves from the Patriarch of Antioch and started to appoint high priests. They are now known as the Orthodox church. The Jacobites disagreed with the Metropolitan and said that their their allegiance as owed to Antioch.

Geevarghese died in 1928 and efforts for rapprochement between the two sects began. A new constitution was drafted and formally adopted by both the Orthodox and the Jacobites in 1934. However, the Jacobites, while accepting authority of Metropolitan, said that they “supported” Patriarch of Antioch.

In 1970, the merged factions peacefully elected a Bishop together. But after 1970, things turned sour as the Patriarch of Antioch started involving himself in the daily affairs of the Church in Kerala. In 1974, he appointed three bishops in Kerala, and this started another round of conflict.

A case was filed in Supreme Court in 1995 and the Court decided that the 1934 agreement is valid and according to that Orthodox faction has all the rights. In 2002, the Jacobites, gathered together in Ernakulam district and formally named themselves Jacobite Syrian Christians, and also wrote a manifesto for themselves.

They again moved Court to get clarity on the old judgement and in 2017, the court said that all Churches occupied by Jacobite faction are to be handed over to the Orthodox faction. There was no action by the government. So the Orthodox faction moved High Court saying that Govt was in contempt of Supreme Court order. The High Court ordered govt to take over Churches and hand over to Orthodox.

The Jacobites have tried everything starting with violence and shouting out threats of suicide by climbing on the rooftops of churches to pressing for a referendum. It is estimated that the Jacobites are a majority when compared to the Orthodox and also control most of the churches. It must be noted here that both have absolutely no doctrinal difference and follow the same rituals to the dot.

Diffrential treatment of Hindus and Christians

The communist regime is trying to pacify both sects with Pinarayi Vijayan taking the lead and chairing talks  to find an amicable settlement to the dispute.

This appeasement of Christians by Pinarayi and his atrocities on Hindus has not gone down well with the majority in the state. A little comparison between the Sabarimala issue and the church sheds more light on double standards of the government.

In the mad rush to desecrate temples, Pinarayi and his government had sneaked in two ladies of unscrupulous character into the temple earlier. This following an earlier directive by the same Supreme Court which wanted entry of women into the holy shrine.

All churches manage large properties and assets and are prone to malpractices and corruption. They are handled by either church heads or the bishops themselves. The women in the Church- nuns – are the lowest in Church hierarchy and are many a times tortured and raped in the confines of such properties. Everyone remembers the recent case of Bishop Franco Mulakkal who is alleged to have raped nuns in Kerala.

Way back in 2009 the Christian community (who are the actual church donors) wanted transparency and proper management of funds coming under various churches. Citizens joined hands to form the Malankara Action Council for Church Act Association (MACCABI)

For this purpose the Kerala State Law Reforms Commission headed by Justice VR Krishna Iyer had come up with a draft Kerala Church Bill. Amongst other things it recommended a tribunal headed by the District Judge who could be approached by any church member, if he or she suspects foul play in their church. The books of accounts have to be audited once every year by a Chartered Accountant of the Church’s choice. It was strongly opposed by the clergy and no action was taken by the then ruling party.

In March 2019, the commission, now headed by Justice K T Thomas, a member of Christian community, too suggested similar reforms, albeit it watered down some provisions in the new version. This was also opposed by the clergy.

The clergy, in their defense, is afraid that government meddling in administration of Church assets might end in eventual takeover of their churches. Communists being atheists is a big reason for such distrust. The bishops also highlighted the infringement of rights on freedom of religion. Unfortunately, the Constitution of Bharat gives special rights to minority communities and not Hindus in respect to management of their religious affairs.

Why would the clergy give up full freedom when it has a choice? Pinarayi Vijayan had even reassured them that his government will not implement the Church Act. Communist appeasement of Christians and Muslims and the persecution of Hindus continues under the Communist government. Unfortunately, the mainstream media never discusses this issue.