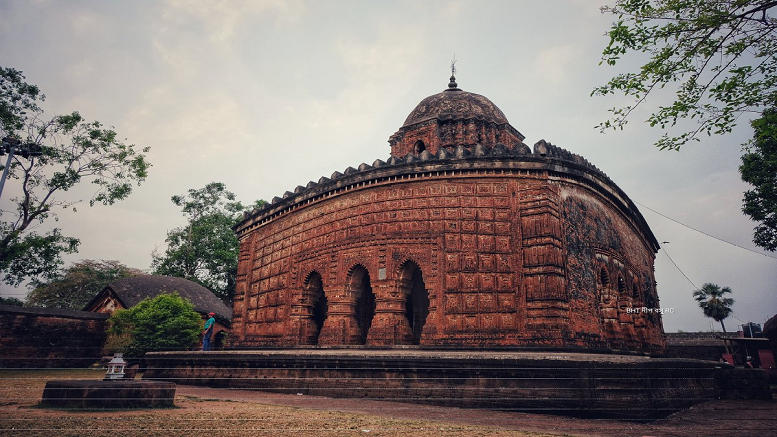 The murti of Shri Shri Madan Mohan was taken hold of by Raja Bir Hambir of Mallyabhum. Although as per historical records it seems that the mandir was built by his descendant Raja Durjan Singho.

There is a fascinating story as to how Raja Bir Hambir came in possession of the বিগ্রহ/ murti.

Birhambir while on a pilgrimage , on his way back to Bishnupur after visiting Vaidyanatha Dham, Bakreshwar etc., took shelter in a picturesque temple as it was getting dark at night while walking through the forest at Brishvanupur in Beerbhoom. At the end of the day, the Brahmin who used to do the nityapuja, came for the daily service and met the king and received him as a warm guest. But the king was bewildered to see the magnificent deity inside the temple, and was quite enamoured by its ethereal beauty.

On asking the attending brahmin he came to know that the murti was that of Bhagwan Madan Mohan. The King then decided to take that murti to Bishnupur. The next day, after making that offer to the Brahmin, the Brahmin politely said, how is that possible!

The king stayed in the guest house of the temple for two more nights and finally “took charge” of Madan Mohan without the knowledge of the Brahmin and brought him to Bishnupur.

Followers, however, claim that Raja himself received a divine order in his dream from Thakur to take him to Bishnupur. Devaseva continued in secret inside the palace. Only a priestly Brahmin, his wife and mother knew about Madan Mohan.

Meanwhile, the Brahmin priest from Brishvanpur, like a madman, came to Bishnupur in search of Madan Mohan, the deity of life, and begged the king to return his deity. Raja flatly denied bringing it.

However, he said that he has three idols like Madan Mohan. He has to choose the real Madan Mohan from among them.

The murtis of Jugal Kishore, Gourgobindo and Radhakanta Jiu were placed in front of the Brahmin. The shape of these murtis was almost the same as that of the original Madan Mohan. But Brahmin could recognize that none of them is Madan Mohan, the deity of his soul.

Unable to get the real Madan Mohan back, he decided to immerse himself in the Koch Birai river near Bishnupur. Meanwhile, the mother of Thakur Madanmohan’s priest came to fetch water from the river, saw the Brahmin tired and devastated and asked him the reason for his grief.

Seeing the Brahmin aspiring to commit self harm , the old woman revealed the position of Madan Mohan inside the palace, despite the prohibition of her son, so that the sin of ব্রহ্মহত্যা does not fall on her son. The emaciated and relaxed Brahmin quickly came to the king and pleaded the King to return his deity. Hearing this, the sky seemed to fall on the king’s head. The king wanted to satisfy the Brahmins with lots of riches instead of Madan Mohan.

But the poor Brahmin would have none of it. The Brahmin stayed adamant in his decision, he decided to go on a hunger strike by killing himself in the temple of Mrinmayidevi, if he does not get the deity of his life. What a wonderful providence of God, the weary exhausted Brahmin dreamt in the night as if his deity were saying ”But you are like my father, you tied me to Maya, so my soul cries to make you sad. You go home, I will go to your house every night, my wife is alone, I will leave a garland of flowers as a sign of my presence to her.”

The Brahmin returned home helpless, and the next morning when the priest opened the door of the temple, he found a bunch of fresh flowers lying beside her. How true this incident is, and how much Birhambir’s attempt to absolve him of the crime of burglary is subject to explanation.

As has been explained in this poem here-

Raja Bir Hambir was an accomplished poet too who is later life was named Shri Chaitanya Das for his extreme devotion to God.

Additionally, in the temple premises you would find an ancient shiva linga which I couldn’t locate the date of and a kamandal with water from Gangasagar which is renewed every year.

The name of the Brahmin to whom the original bigroho belonged to was called Dharani Brahmon.

(This article has been compiled from the tweet thread of @BengalAntiquity.)