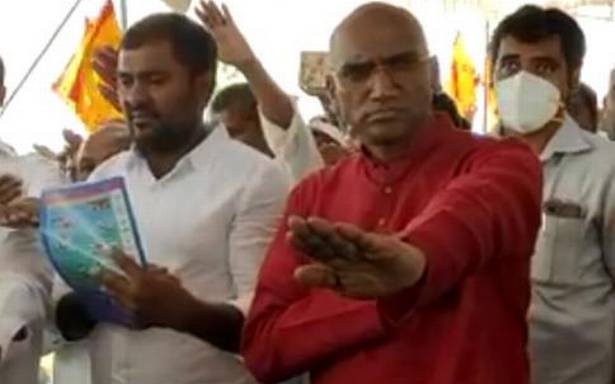 The video of a serving IPS officer taking oath in a large group that he doesn’t believe in Hindu deities and won’t worship them either has shocked citizens. In a video doing rounds in social media, IPS officer RS Praveen Kumar, the secretary of Telangana Social & Tribal Welfare Residential Educational Institutions Society, can be seen taking the anti-Hindu oath. He is the founder of a movement called ‘Swaero’, which supposedly helps Dalits get better education.

The “sw” in Swaero stands for social welfare, while the word “aero” refers to the sky. The movement is said to consist mainly of the alumni of Telangana Social & Tribal Welfare Residential Educational Institutions Society. He also founded and runs SWAERO circle which mainly consists of the alumni of Gurukul schools (residential schools run by the Telangana government for SC/ST children).

The oath-taking video was taken during the inauguration ceremony of the ‘Swaero holy month’ during which the members read the works of Dr. BR. Ambedkar and other activities related to Dalit upliftment. In the video people can be seen reciting that they’ll renounce Sanatana (Hindu) Dharma, they would neither believe in nor do puja to Hindu deities. “I believe in neither Rama nor Krishna. I won’t worship them. I don’t believe in Gowri or Ganapathy or any other Hindu deities” they can be heard reciting and officer RS Praveen Kumar is in the middle leading the oath with his hand held out.

It has shocked everyone as an organisation that supposedly works toward the upliftment of Dalits, and the police officer who found it, himself openly declared that they don’t believe in Hindu deities which is eerily similar to what missionaries preach to neo-converts. Recently Praveen Chakravarti, a notorious evangelist was arrested after a series of temple attacks in Andhra Pradesh. He had said in a video that he had kicked Hindu murtis, sacred trees and encouraged the neo-converts to do the same.

RS. Praveen Kumar’s Swaero network is run by volunteers who conduct physical and educational training classes in the morning and evening to school children. They claim to have Village Learning Circles in more than 500 villages of Telangana and AP.

Praveen Kumar and his volunteers have also been accused of controlling the Gurukul schools. In 2019, National SC Reservation Parirakshana Samithi’s president Karne Srisailam made an accusation that there are irregularities in theses schools in a press meeting where he was attacked by Swaero members including one Palo Alexander who allegedly threatened Srisailam to not hold the press meeting, the previous day.

Students of Gurukul schools take the pledge of Swaero circle. As the schools are tax-payer funded, such activities have raised alarms over what is being taught in them. The organisation is facing criticism that it has become a cult with the current students and the alumni of Gurukul schools identifying themselves as a ‘Swaero’ instead of their ancestral surname or community. Apparently people use this name for their shops, as their second name, at weddings and even in names of villages and colonies. So the ‘oath’ has created uproar as in the name of Buddhism they are forming a cult that openly advocates against Hindu Dharma.

Telangana BJP state president Bandi Sanjay accused Praveen Kumar of “working against the Hindu religion and humiliating Hindu gods,” and questioned where he gets funds to run Swaero circle.

While he was on the way to a party meeting, Bandi Sanjay’s convoy was ghaeroed by Swaero members who demanded that he withdraw his comments on Praveen Kumar and apologise. Dalit Positive Movement which has been working against the conversion mafia and helping Dalits who face issues has alleged that Praveen Kumar has been aiding conversion from within the Hindu community.

Legal Rights Protection Forum, another organisation fighting human rights violations and misuse of government funds has written to Jitendra Singh, MoS to PM office and the department of personnel training, seeking strictest action against the officer for spreading disharmony and enmity in the society. They have also complained to the Cadre Controlling Authority under the Home Ministry under section 3 of The Police-Forces (Restriction of Rights) Act,1966 which mandates that ‘No member of a police-force shall participate in, or address, any meeting or take part in any demonstration organised by any body of persons for any political purposes or for such other purposes as may be prescribed’.

The officer has issued a statement saying that neither Swaero nor him are personally connected to those who recited the oath. In his statement he has said that it was a Buddhist family that went on stage to recite this oath and that neither he nor his colleagues in Swaero circle subscribe to their views. However his actions speak otherwise as he has liked a tweet saying ‘conversion is the only solution’ to the social issues Dalits face.