Sthala purana of the Andal Temple 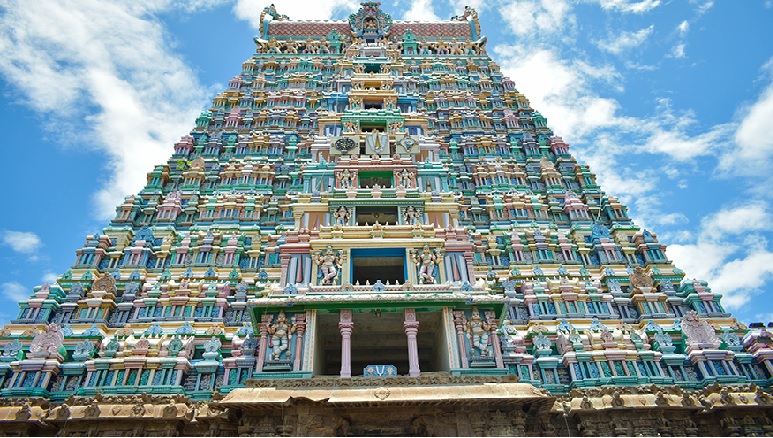 Andal, the  9th century  Sri Vaishnavite poet, is  the first woman Bhakti poet of the country.  The sthala purana of the Srivilliputhur temple associated with Andal  is significant  because  it has  had a huge influence on the Sri  Vaishnavite acharya Sri Ramanuja, who systematized the essence of Vaishnavite  Bhakti  traditions and from then on it becomes a pan-Bharata  literary, spiritual, aesthetic cultural movement.

If you’ve grown up in Tamil Nadu, like I did, sthala purana is so familiar to each of us, especially if you’re a regular temple goer. Whenever I would visit a temple, which was as early as I could remember, when the priest would do an  arti, he would recite the sthala purana  of the temple.

At that point and even today, there did not arise in me any questions of chronology;  any questions such as: Is this true? Where is the evidence? Where is the epigraphic evidence?  Where is the textual evidence? Instead, then and now, I was filled with a sense of wonder;   a sense of awe;   a sense of mystery; a sense of magic… which, essentially, is what the mystic path is all about… which is what the spiritual path is all about. Strangely, sometimes I feel so limited by having to convey all this through the medium of  words, which anyway is only an approximation of an experience. In Sanskrit, sthalapurana (sthala: place; purana: story) refers to the story  of the place,  historical lore  of the temple;  and the sacrality of the site.

I live in Madurai and the temple town of  Srivilliputhur is just 75 kilometres by road. It  happens to be the birthplace of two Sri Vaishnavite azhwars (the mystic poet philosophers part of the Sri Vaishnavite tradition) Periazhwar and his daughter Goda or Kodhai, later known as Andal. Most people outside Tamil nadu have hardly heard of Andal. In fact, someone once humorously remarked, “For most people outside South India, Andal remains only a one mark question in the UPSC  exam!”

Andal  is the 9th century  Sri Vaishnavite poet  and  the first woman Bhakti poet of the country. South Bharat has  been the cradle  of the bhakti movement both in the Shaivite and Vaishnavite traditions. In the Shaivite tradition, we have the 63 Nayanmars and in the  Sri Vaishnavite tradition, we have the 12 azhwars.  Even the name azhwar  itself is so significant because it refers to  someone who is immersed in their deep love for a personal God.  Bhakti, to me,  is immersion;  its devotion,  and  love but devotion and love immersed or  soaked in a quest for that transcendental union with the divine.

The sthala purana of  Srivilliputhur is rooted in antiquity. It’s a multi-tiered narrative. The site is mentioned for the first time in the Varaha purana.  Vishnu, in  the varaha avatar,  killed  the asura Hiranyaksha,  took shelter in Srivilliputhur along with his consort Bhu devi, the Earth Goddess. Interestingly, the temple town nestles  at the foothills of the Western Ghats with  beautiful green verdant fields like green carpets swaying in the breeze and in the distance, you have the hillocks  scalloping the fields.  Not surprisingly,  in the Varaha purana,  this place is known as shenbagaranyam or the forest of the shenbaga trees. Interestingly, the Grizzled Wildlife sanctuary is situated in  Srivilliputhur.

Later, maybe sometime in around the seventh or eighth century CE, Villi and Kandhan, two brothers and two local chieftains lived around this area. Kandhan happened to be killed by an asura and Villi was distraught. However,  Vishnu appeared to him in a dream, revealed his identity and  told him that he could be found beside a banyan tree resting in the sayana thirukolam – Vishnu in the reclining posture.

He directed  Villi  to go find the deity. Accordingly, Villi discovered the deity  at the bottom of  the banyan tree  around which lay scattered several  gold coins.  He was instructed to build a temple and that’s how  in this temple the  main shrine, the moolavar sannidhi – the   principal deity, Vatapatrasayi, is Vishnu in the reclining form under the banyan tree.

Of course,  no mention of Srivilliputhur  is complete without  Andal. Periazhwar or  Vishnu chitan, was the first of the Sri Vaishnavite mystic poets. The  name itself is very significant. It means  “someone whose mind eternally dwelt on Vishnu”.  He found this little girl as a five-year-old in the nandavanam  or the sacred grove of the temple  when he was plucking the basil leaves to offer as  garlands for worship of the principal deity.  He named her kodhai—she of the fragrant tresses.

There is  this interesting story associated with Kodhai. Every day, Sri Vishnu Chithan  would make a tulasi (basil)  garland for the principal deity . One day, however, he discovered the  young  Kodhai  (just five years old!) wearing the  garland  and admiring herself in the well which, even today, stands in the midst of the temple.

This was an act of ritual transgression. It could also be seen as an act of devotion. Goda’s  father reprimanded her, saying that her behaviour was not permissible. However, that night,  Sri Vatapatrashayi appeared in a dream and said he would henceforth wear only the garland worn by Kodhai. From that day onwards,  her father bestowed on her the tile chudi kodutaval  or she who gave the garland  which she had worn to the Divine. The entire story of Andal is her journey from Kodhai to Andal. Later on, Kodhai is apotheosized.  She is raised to the status of a divine consort, Vishnu’s divine consort.

Interestingly the story goes that after the Varaha avatar,  Bhu Devi, Vishnu’s consort told him that she would like to be reborn on earth as the greatest devotee of Sri Vishnu  because  only in an earthly form can you experience the bliss and a joy of transcendental divine union. Hence her request  was  granted and she was reborn as Kodhai or Goda  who later becomes Andal or she who rules her Beloved.

Andal’s Bhakti is something to be experienced.  I don’t think I can do any justice to Andal’s bhakti intellectually.  Two of her greatest works—Thiruppavai, the  collection of 30 verses, which is the path to Sri Krishna and Natchiar Thirumozhi, which is roughly translated as ‘sacred songs of the lady’.

What do we find most in these two poems? Sharangati to the Divine in a personal form.  I’m not very comfortable with the word surrender because it seems very militaristic to me but that’s the closest we can come to it.  Its atma  nivedhanam or the offering of the self. In the nine forms of Bhakti delineated in the Sri Bhagavatha Puranam, atma nivedhanam is the highest. So, in sharanagati,  you don’t surrender  in instalments. You surrender all of yourself; you surrender the ego. Sharanagati is all or none. Either you should surrender completely or you don’t.

It’s a very embodied love. If you get a chance to engage with Andal’s poetry, its  a poetry which is very rooted in the body. It’s a very kind of deeply embodied love and the dominant emotion in Andal’s poetry is madhurya bhava or yearning and uniting with the Divine.  Vaishnava Bhakti poetry is all about saulabhya or ease of access to the Divine. The  various Vaishnava Bhakti poets have conceived of  an intimate deeply personal relationship with the Divine:  it could be as a lover;  a friend;  a servant or any  other role. But  Andal she sees herself as the bride of the Beloved. It’s madhurya bhava and  you have the pangs of viraha or being separated from the Divine and her yearning to be united with Him.

One of my favourite verses from the Natchiar Thirumozhi  is karpooram narumo, kamalapoo narumo…  where Andal  addresses the conch of  Sriman Narayana  and she says, “I envy you because of your intimacy to Him. You’re so close to Him;  you rest on His  handsome shoulders and you also can feel  the smell of the taste of His mouth. Does it smell as sweet as a camphor?  Or does it smell as sweet as a flower?  Tell me, because I want to know because I cannot experience what you are experiencing!”

Andal and the sthala purana of the Srivilliputhur temple  is significant  because  it has  had a huge influence on the Sri  Vaishnavite acharya  Sri Ramanuja, who  systematized the essence of Vaishnavite Bhakti  traditions and from then on it becomes a pan-Bharata  literary, spiritual, aesthetic cultural movement. The nucleus of Srivaishnava-sampradaya which is the southern branch of Vaishnavism begins here and that sows the seed for the  Vaishnava bhakti movement throughout the country.

Incredibly, it all begins from  the  little  temple town of Srivilliputhur and the other surrounding temples in that area in Tamil Nadu.