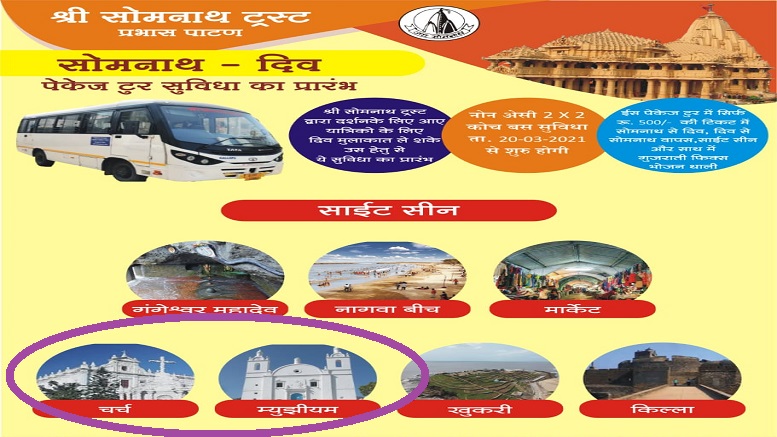 Gujarat government controlled Shree Somnath Temple trust is under fire from Hindus for offering a package sight-seeing tour to nearby Diu with an interesting stop on the itinerary – a Church!

The temple trust posted an image on twitter today, which talks about the Somnath-Diu package tour facility being started from 20 March. It is being offered to devotees who come for darshan at the temple and are interested in visiting the island town of Diu (part of Union Territory of Dadra and Nagar Haveli and Daman and Diu), which is around 80 km away.

The Rs. 500 ticket offers a person a two-way non-AC bus fare from Somnath to Diu, sight-seeing in Diu and a Gujarati meal thali.

(Archive of above tweet, which has now been deleted)

Diu was conquered by the Portuguese in 1546 who ruled there till 1961. Liberated on 19th December, 1961 from Portuguese, it is today part of the U.T. of Dadra and Nagar Haveli and Daman and Diu.

The Church which is shown on the tour itinerary appears to be the Catholic St. Paul’s Church in Diu, constructed around 400 years back. Anyone who is familiar with history knowns that Portugese were one of the most fanatical Christian colonial powers who inflicted blood-curdling tortures on indigenous Hindus living in the areas colonized by them, especially during the ‘Goan Inquisition‘. Portgual’s colonial record in Brazil and Africa is equally terrifying.

Our secular state has so effectively erased the civilizational and collective memory of Hindus that naive Hindu devotees who have come for darshan to a temple which is an iconic symbol of Hindu resistance are being packed off on a tour that includes a Church built by a foreign coloniser that destroyed temples and brutalized Hindus!

Even the museum on the tour itinerary is an old Church building that now houses a collection of Catholic statues! Just the kind of things that a Hindu who has come to have darshan of Mahadev at the first among the twelve Aadi Jyotirlings of Bharat should see, as per the babus who run Somnath Temple trust!

Incidentally, PM Modi is the Somnath Temple trust chairman. As per the temple website –

The later sources of history account for several desecrations by Muslims invaders during eleventh to eighteen century A.D. The temple was rebuilt every time with the reconstructive spirit of the people. The modern temple was reconstructed with the resolve of Sardar Patel who visited the ruins of Somnath temple on November 13 1947. Then President of India, Dr. Rajendra Prasad, did the Pran-Pratistha at the existing temple on 11 May 1951.

The Somnath Trust would be better off focusing on educating Hindus about the temple’s proud history, the fierce resistance put up by our Hindu ancestors, the attempts to scuttle Somnath temple reconstruction by Nehru and his acolytes, and the thousands of temples which still lie in ruins or with mosques built over them to prove the ‘superiority of Islam’.

It is time Hindus stop blindly trusting whatever is dished out to them in the garb of secularism and tolerance. We need to have total control over our Dharmic holy spots and institutions, and utilize funds generated therein for the sole cause of preserving and propagating Dharma.