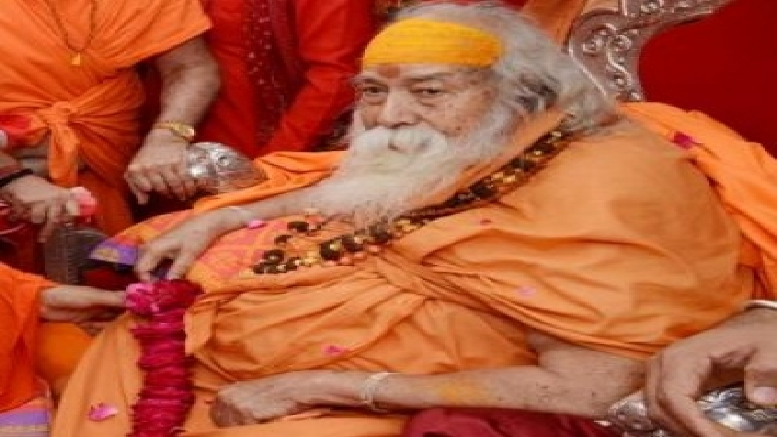 As per the information, the seer breathed last at around 3.30 p.m. after a mild heart attack at the Jhoteshwar Paramhansi Ganga Ashram.

Just a few days ago, the seer had celebrated his 99th birthday on the occasion of Hartalika Teej.

Narsinghpur MLA and former MP Vidhan Sabha Speaker N.P. Prajapati (who is among the Shankaracharya’s disciples), informed that his Samadhi (symbolic funeral) will take place at 4 p.m. on Monday near the hillside Ashram in the same Narsinghpur district.

Swami Swaroopanand Saraswati was born at a village known as Dighori in Seoni district in Madhya Pradesh in 1924.

He was born in a Brahmin family and his childhood name was Potiram Upadhyay. He had left home when aged just nine years only in pursuit of god.

In 1950, his Guru Brahmananda made him a Dandi Sanyasi. He became the president of Akhil Bhartiya Ram Rajya Parishad established by Swami Karpatriji.

On Krishnabodha Ashrama’s demise in 1973, the title of Shankaracharya (disputed) of Jyotir Math, Badrinath passed to Swami Swaroopanand. Nine years later in 1982, he also became the Shankaracharya of Dwarka Peeth.

When aged just 18, he had become a part of the country’s freedom movement and was known as “Revolutionary Sadhu” for taking part in the 1942 Quit India Movement. He was jailed for it and served a prison sentence for around a year and half.

He not only was a veteran Hindu seer, but also held strong opinion on host of other issues, spanning from Ganga pollution, Uniform Civil Code, Abrogation of Article 370 of Indian Constitution, cow and bull slaughter, women worshipping Shani, on Shirdi Sai Baba and on the RSS and coming to power of the Narendra Modi-led BJP in the 2014 general elections.

He had also claimed that the Bhoomi Pujan of the proposed Ram Temple in Ayodhya by PM Modi on August 5, 2020 was done in an inauspicious muhurt.

He had countless disciples spread all over the country, including key politicians, among them former MP CM Digvijaya Singh.

Politicians, including Chief Minister Shivraj Singh Chouhan and MP Congress chief Kamal Nath expressed their condolences to the demise of the Shankaracharya.

“The news of the death of Swami Swaroopanand Saraswati, the revered Shankaracharya of Paschim Amnaya Shri Shardapeeth, established by Lord Shankaracharya, is very sad. Your incomparable contribution to the Indian knowledge tradition will be remembered by the whole world for eternity,” Shivraj Singh Chouhan tweeted.

Madhya Pradesh Congress Commitee head and former chief minister Kamal expressed his condolence sharing a photograph of his meeting with the seer during his 99th birthday.

“Just a few days ago, by attending his 99th Praktyotsav and Centenary Entrance Year Festival, bowing down to his feet and blessing him,” Kamal Nath tweeted.