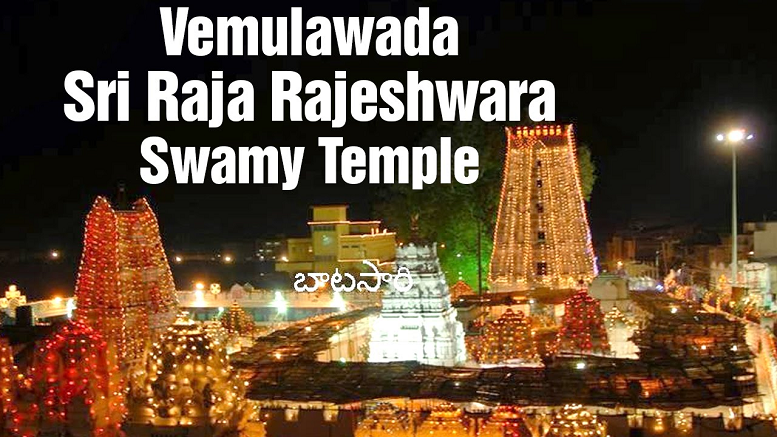 Raja Rajeswara Swamy temple, abode of Bhagwan Shiva – at Vemulawada village of RajaannaSirisilla District in Telangana State is one of the ancient and famous Shivaite temples. The presiding Deity – Bhagwan Raja Rajeshwara is known as “NeelaLohitha”.

Bhavishyothara Purana mentions that Surya Dev recovered from disability by praying at the shrine here and so this shrine is termed “Bhaskara Kshethram”. Also, Indra, the King of Astadikpalaka, by worshipping Bhagwan Sri Raja Rajeshwara got rid of Brahmahatya Dosham.

It is said that this temple was built by Raja Narendra (one of the kings belonging to Vemulawada Chalukyals) the grandson of Parikshit, who was the grandson of Arjuna. Raja Narendra who got leprosy when he accidentally killed a Muniputra (a Saint’s son) was fully cured by taking bath in Dharmagundam [Pushkarni] at Vemulawada, had darshan of Bhagwan Sri Raja Rajeshwara and Devi Sri Raja Rajeshwari Devi and received their blessings. He then built a temple and installed ‘Shiva Lingam’ which was lying in the bed of the Pushkarni.

Historically Vemulawada was the capital of the VemulawadaChalukyas (a branch of the Chalukyas of Badami) who ruled from 750 to 973 CE. Inscriptions found in this place refer to Vemulawada as Lemulavatika.This Shrine is popularly known as ‘Dakshina Kasi’ [Southern Banaras] and also as “HariharaKshetram” as there arealso two Vaishnava Temples in main Temple complex i.e., Sri Anantha Padmanabha Swamy Temple and Sri Seetharama Chandra Swamy Temple.

Sri Anantha Padmanabha Swamy is Kshethra Palaka of this temple and pujas and rituals areperformed in the temple for both Shivate&Vaishnavate festivals. In addition to Maha Shivaratri, Sreerama Navami is the other major festival celebrated in this temple.

The Garbha –Griha has Bhagwan Raja Rajeshwara in the form of Neelalohitha Shiva Linga along with Devi Sri Raja Rajeshwari Devi on the right side, Sri Lakshmi Ganapathy on the left side and Nandeeshwara facing the Bhagwan Shiva. The other important temples in the premises are Sri Anantha Padmanabha Swamy Temple, Sri Seetharama Chandra Swamy Temple and Sri Anjaneya Sahitha Kasi Visweswara Swamy.

As this region was once known for Jainism and Buddhism, one can find the sculptures on the temple walls depicting these two religions as well. Thus, Vemulawada is a unique place that attracts not only Shaivites, Vaishnavites and Shakteyas but also the followers of Jainism and Buddhism.

After taking the ox around the temple, the devotees hand over the ox to the temple authorities. Ox is offered to Bhagwan as it is the vehicle of Bhagwan Shiva. Some of the Oxen so received from the devotees are in turn distributed to the poor farmers by the authorities. The remaining Oxen are maintained in Gau Shalas. It is believed that major income of Vemulawada temple comes from this ritual.

The complete verse in Yajurveda 16.47 where Bhagwan Shiva who is praised as NilaLohitasays:

(O Lord, our saviour from degradation, lord of wealth, driver of foes to the abyss of poverty, robed in blue and red dress, terrify not these people and cattle, nor make them diseased. Let not us or anyone else be sick.)

Therefore, offering Oxen by the devotees to Bhagwan NilaLohita is typical expression of gratitude to Him for fulfilling their desires.

The temple is built on the classical south Bharatiya architecture style. The high temple dome has many beautiful engravings on it. The entire temple complex is painted in pristine white colour that reflects both the elegance and the spiritual aura of this temple.

Famous Kannada poet “Pampa” lived here as the court poet of Arikesari – II (A.D. 930-955) and dedicated to the King Arikesari II his ‘Vikramarjuna Vijaya aka ‘Pampa Bharatha (Kannada Bharatha), which is considered to be Kannada’s greatest epic.

The nearest broad-gauze Railway Station is Warangal – Khajipet (around 100 KMs) and nearest meter-gauze is Kamareddy (around 50 KMs), Karimnagar (36 KMs). The distance between Hyderabad to Vemulawada by road is around 150 KMs and the nearest Airport is Hyderabad.

This year’s Amarnath Yatra will be a blockbuster event