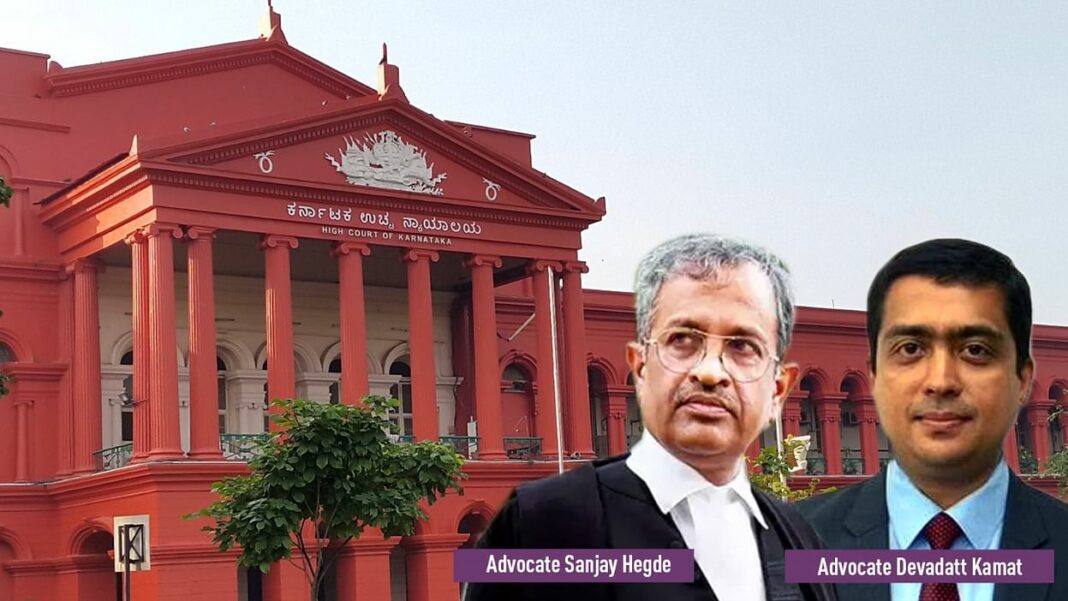 The Karnataka High Court, hearing the hijab row, on Thursday ordered that no religious symbols are allowed for the students until its final order, thus ruling out use of both hijab and saffron shawls in school and college premises.

“We want to make an interim order on the matter of hijab row. We will hear the matter every day,” the Chief Justice stated. Peace has to return to the state, and schools and colleges must open soon, the bench said, adjourning the matter to Monday.

Earlier, while hearing the arguments, the Chief Justice told Advocate General Prabhuling Navadagi to open schools in the state. “Closure of schools is not a good development. Take necessary action and conduct classes. See to it that no problem surfaces,” he stated.

Amid tensions, the state government on Tuesday announced a three-day holiday for schools and colleges. During the hearing, senior counsel Sanjay Hegde, appearing for a petitioner, submitted that the Karnataka government has no right to frame rules on uniform, as per the 1983 Karnataka Education Act. The rules on uniform could be framed by the the College Development Committee (CDC) and School Development and Management Committee (SDMC), he maintained.

“The girl students can’t be made to sit on roads. Karnataka state contributes highest taxes to the Central government. Most startups come up here and these developments will bring disrepute to the state. Discrimination should not be made on the basis of clothes, colour, and religion,” the counsel argued.

Here, Hegde – a Congress ecosystem Lutyens’ lawyer known for peddling fake news – was repeating similar lies to what Senior advocate of Supreme Court, Devdutt Kamat (a Congress member) who is also representing the pro-Hijab group in court, had uttered the day before.

The burqa/hijab clad girl students weren’t “made to sit” on roads – govt. junior colleges were perfectly fine with admitting them into campus as long as they adhered to the established dress code. In fact one college allowed them to enter the campus and sit in a separate room as part of their protest. But this was spun as some sort of apartheid/segregation similar to what Blacks once faced in USA, by Kamat!

Also, as Hegde himself stated – if the school/college committees are responsible to decide rules on uniform, the protestors must present their case to the said committees if they want change to well-established and long-standing uniforms?

As the Udupi school authorities have clarified, the rules were framed in 2004 after discussion with PTA (Parent Teacher Association) – for all these years, Muslim girl students were dressing similar to their Hindu counterparts and there was peace. Now suddenly, 6 students out of 90 Muslim students turned activist and are jeopardizing the education of all 965 students in the govt. school which caters largely to the poor!

Hegde is also the same lawyer who authored the dangerous, redundant and ill-thought out MASUKA law to combat mob lynching. But there is a whole breed of such Hinduphobic senior SC lawyers who exercise a chokehold over our judiciary, as was revealed by outgoing CJI Ranjan Gogoi. So it was no surprise to see Hegde, a virulent opponent of the CAA law, being appointed as an ‘interlocutor’ by the SC milords to mediate with the anti-CAA Shaheen Bagh protestors. That mediation failed miserably and the deadly anti-Hindu Delhi riots followed within days.

Hegde and Kamat argued for the hijab stating there is ‘no harm’ in students wearing it. Hijab is a ‘fundamental right’ and it does not cause ‘any problem’ to others, they said, arguing that the government has issued circular on uniform “hurriedly”. The other day, Kamat was quoting Islamic hadith “It is not correct for a woman after she starts menstruating to show her hands and face to strangers” to make the case for hijab in schools. Going by this interpretation of essential religious practice, it seems a mandatory full-body burqa with face veil and gloves for school-going Muslim teens is going to be the next demand of the Islamist-liberal lobby!

The Islamists are already headed in that direction – in guise of hijab, we are seeing protests and billboards of burqa-clad women!

This is the root of the problem with hijab in school campuses, which the Congress ecosystem advocates are brushing under the carpet: hijab is meant to ostensibly protect Muslim girls from the male gaze. This is how it is justified to ordinary Muslims by their ulema and elders –

How can one not see the inherent problem of objectifying women as mere objects, as candy or meat, that cannot be left ‘uncovered’. Is that the kind of message we want to send to our next generation studying in our schools?

Dressing modestly is one thing – the pro-hijab/burqa group taunt with the “let you girls roam naked if you want, we won’t” jibe, as if that is the only alternative to the hijab. How can school-girls clad uniformly in shalwar-kameez or even skirt/pant-shirt be considered ‘lust-inciting’? Is that a problem in the girl’s dressing or the mindset of such men, or the religious doctrine they subscribe to?

It is also pertinent to note that some of the junior colleges where this hijab row is taking place are women only institutions, but the handful of hijab-demanding girls claim hijab ‘protects’ them from male teachers!

A Hindu girl student from Karnataka hit the nail on the head, asking “Aren’t we girls too? We have all the protection we need.” The simple, and politically incorrect, fact of the matter is this: the implicit message a hijab/burqa clad woman is giving is that those not clad in burqa/hijab have loose-morals, are lacking in character, hence legitimate targets for sexual predators.

To inane arguments comparing hijab to Sikh turban, or Hindu bindi/tilak etc, ex-foreign secretary Kanwal Sibal’s tweet says it best “Sikh turban/bindis/tilak/vibhuti has nothing to do with modesty & privacy from unrelated males.”

He also highlighted the hypocrisy of Indian liberals who are cheering Indian Muslims being pushed into ever-more regressive lifestyles by radical outfits like PFI, at a time when Muslim reformers in the Islamic world are opposing those misogynistic practices.

Hegde and Kamat went on to make some more desperate arguments – they argued that as per the Karnataka Education Act, uniform is not compulsory for students and they only be fined Rs 25 for violating the uniform rules. As Chief Justice Awasthi intervened here, asking whether the petitioner is saying uniform is not required, the petitioner submitted that as per act, ‘it is not compulsory’. It is okay for primary school students but uniforms for college students is being objected, he said.

Again, the senior lawyers resorted to half-truths. The colleges in question here are pre-university colleges, or junior colleges for Class XI and XII students – so they are like senior high schools where uniform is mandatory.

Hegde and Kamat asked the court to pass interim orders allowing the Muslim girls to wear hijab and attend the classes, but this was opposed by Navadagi and ultimately the HC also ordered that schools and colleges should reopen but no religious symbols can be worn by student until its final order.

The state of Karnataka has witnessed serious violence over this hijab row instigated by CFI, the student wing of the dangerous terror-accused Islamist outfit PFI. A teacher Manjunath Naik was even attacked with iron rods and his condition remains serious.

Following the High Court’s interim order, Karnataka Chief Minister Basavaraj Bommai on Thursday ordered reopening of schools up to class 10 from Monday which were closed owing to the violence that erupted recently over the hijab row. “I appeal to everyone to work together & see that there is peace in the colleges. Schools will reopen from Monday for classes up to 10th standard. Degree colleges will reopen later,” he said.