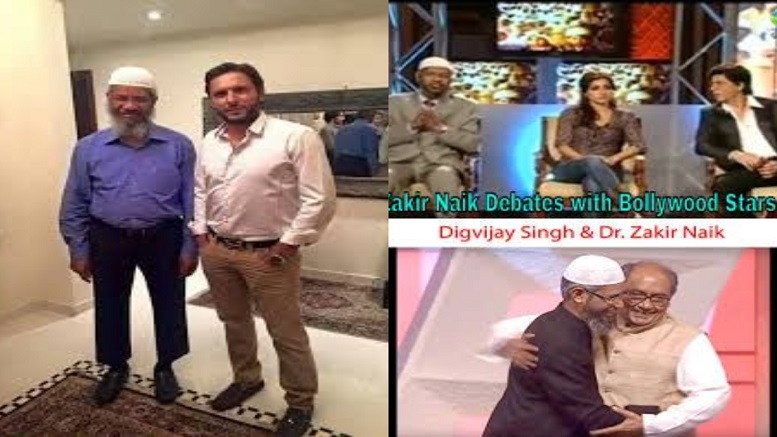 The peddlers of secular narrative in Bharat are found in abundance in media, entertainment and political parties. One of the themes on which the distorted secularism of Bharat thrives is that ‘Islam promotes equality of mankind.’ This supposed equality of Islam was often spoken of in the same breath with ‘caste inequality and injustice’ in Hinduism. Infamous Islamist Zakir Naik, who has been implicated in various terrorist incidents, riots (including recent Delhi riots) and has defended Osama bin Laden, has released a video that inadvertently exposes this incorrect narrative about Islam.

Who is Islamist Zakir Naik?

It must be noted that although currently this Islamist Zakir Naik is a fugitive from Bhartiya law and is living in Malaysia, he used to be a celebrity when he was in Bharat. He ran Islamic Research Foundation and a channel Peace TV from Mumbai. He used these to spread his Wahabi Islamist ideology and to convert non-Muslims to Islam.

He can be seen hugging leaders such as Congress’ Digvijay Singh, debating with Sri Sri Ravishankar and interviewing with Shahrukh Khan. He is also seen in photos with Shahid Afridi and the Easter suicide bomber of Sri Lanka. His scripted videos ‘proving’ superiority of Islam by calling Muhammad a reincarnation of Tripurasur and similar amusing arguments which are quite popular among devout Muslims and college students in search of comedy. Filmmaker Mahesh Bhatt attended his meetings and praised him, and even offered to make a movie based on his life.

Before paying money to watch @MaheshNBhatt 's or his family's films, do watch this. He is praising Zakir Naik, who openly says in his sermons that a Hindu is not equal to Muslim. Muslims are supreme. All enemies of India are Mahesh's best friends. has more admirers in 🇵🇰 than 🇮🇳. https://t.co/jSXjnulMIY pic.twitter.com/ewnZCJRyV1

It is his latest video, that has gone viral on social media. In the video, a fan asks Zakir Naik whether pro-Muslim voices like Ravish Kumar will go to Jannah, the Islamic version of Paradise full of rivers of wine and 72 virgins. Naik, after providing some detail about how good deeds do not matter if a person is Mushrik (one who believes in any other God than Allah. e.g. Hindus), says that likes of Ravish will ‘go to the lowest level of hell’. Watch it here:-

Good news for Ravish kumar ji. He will rot in the lowest level of hell, alongside Mahesh Bhatt, Swara Bhaskar, Rajdeep etc…😜 I am not saying, Zakir Naik says so😉
Am I not right when I say that this man has ugliest of mindset. In pure definition, he is nothing but a Fascist. pic.twitter.com/KuPndcBGtk

Islamist Zakir Naik softens the blow by saying that as Muslims will go to different levels of heaven (apparently, there are seven levels of heaven, each made of water, brass, silver etc.) and maybe there are levels in hell too. Thus all non-Muslims who do good deeds (in this case, favour Muslims) will go to a mild version of hell. This, of course, includes Ravish Kumar.

Was this statement unexpected?

This video can be shocking only for people unfamiliar with Abrahmic religions and their exclusive claim on religious truth. It is well known to most readers that Christianity and Islam(all of their schools; no exception) stand on the principle that they are the one true religions and that all people who do not follow their tenets are bound to eternal hell. It is thus clear that Hindus, Jains, Sikhs etc can at best expect ‘tolerance’ from them. After all, who can respect ‘sinners bound to hell’?

This is not the first time a prominent Islamic preacher has shown secularists their place. Gandhiji was famously secular and saw no difference in Allah and Ishwara. He supported the Khilafat movement and formed an alliance of Congress and Khilafat Movement. The most prominent leaders of Khilafat were Ali brothers, Muhammad Ali Jauhar and Shaukat Ali. Readers will remember that Samajwadi Party leader Azam Khan of Rampur had opened a university in the name of Muhammad Ali Jauhar.

Maulana Muhammad Ali Jauhar used to kiss feet of Mahatma Gandhi in private. However, once he realized that Khilafat Movement has failed and people starting to question his loyalty to Islam, he gave speeches saying “However pure Mr. Gandhi’s character may be, he must appear to me from the point of view of religion inferior to any Musalman, even though he be without character.” and “… according to my religion and creed, I do hold an adulterous and a fallen Musalman to be better than Mr. Gandhi.” This was about a hundred years ago in 1923.

There are two lessons that Hindus can learn from the video:-

The peculiar secularism of Bharat is a one-way street. Despite being the most tolerant people, Hindus get preached to about tolerance and treating everyone in the same way. On the other hand, Christians and Muslims get a free pass to preach and practice their bigotry. The paradigm of secularism in Bharat has to undergo a profound change in the interest of national integration.