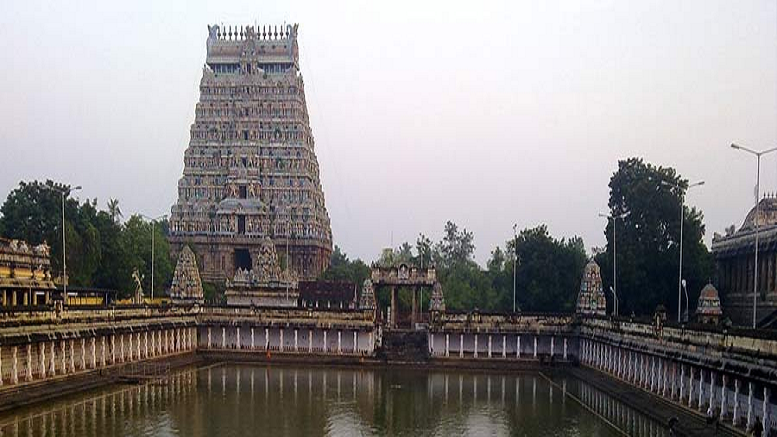 It is very rare to come across a temple where the presiding deities are both Bhagwan Vishnu (protector) and Bhagwan Shiva (the destroyer) and the temple worship is done according to Vaishnava tradition as well as Shaivite tradition. There are two prominent temples in Bharat where we find such an exception-

Sri Govindaraja Perumal temple (known as Thiruchitrakoodam) has the unique distinction of being located on the world famous Chidambaram Nataraja (Bhagwan Shiva) temple complex very close to the main shrine of Shiva in the temple town of Chidambaram, Tamil Nadu. Likewise, there is a famous Shiva temple called Ekambareswarar temple at Kanchipuram in Tamil Nadu that has a Vishnu temple on the same premises – Nilathingal Thundam Perumal temple. These temples are two rare Divyadesam Vaishnava shrines that have Bhagwan Vishnu along with Bhagwan Shiva as presiding deities.

The Shaivite King Kulothunga Chola II is believed to have removed the presiding Govindaraja murti from the shrine in Chidambaram. It is believed that the main deity of Bhagwan Govindaraja was Left in the sea. The devotees of Bhagwan Govindaraja brought the utsava murthis (processional deities) of the God to Tirupati and Saint Ramanujacharya performed consecration to install Govindaraja deity there in 1130 AD. The earliest of the records available on this temple at Tirupati belong to the year 1235 A.D when the Chola King, Raja Raja III was ruling the place.

The temple came into prominence in 1506 A.D. during the rule of Saluva dynasty of Vijayanagar and from then onwards different rulers in a different way developed the temple. Few parts of the inner shrine date back to the 9th and 10th centuries. The history and the old records of the temple indicate this temple had Sri Parthasarathi on the main altar much before the installation of the murti of Govindraraja Swamy by Saint Ramanujam in 1130 AD.

During the 12th century, due to Muslim invasion the local people fearing damage to the main temple murtis of Bhagwan Parthasarathi, Satybhama and Rukmini covered these murtis by constructing walls leaving rest of the mantap open. In the 16th century, king Krishnappa Nayak, Son of Viswanatha Nayak of Madurai Nayak dynasty, expanded the Madurai Kingdom and brought most of the territory under the Pandya dynasty. He was instrumental in installing the murti of Govindaraja back in the Chidambaram Nataraja temple. Subsequent to these developments the utsava murtis of Govindaraja Swamy that were originally brought in 12th century from Chidambaram to Tirupati were taken back to Chidambaram temple.

Govindaraja Swamy temple at Tirupati is a testimony to the remarkable and commendable architecture of southern Bharat. It is a seven-storey Gopuram exterior with 11 kalasas that date back to 14th to the 15th centuries (This gopuram construction was completed in 1628). This temple is one of the largest temples in the Chittoor district in Andhra Pradesh. The carvings on this Gopuram depict the scenes of the Bhagwan’s life of Bhagavata, Ramayana and Bhagwan Balaji.

When late Mr. P.V.R.K. Prasad, IAS, was Executive Officer of TTD during 1978-82, he while going through the archives, history and other material and realised that this temple was originally abode of Bhagwan Parthasarathi but the murti of Parthasarathi was missing. His curiosity led to investigation and resulted in breaking the walls that were built long ago in the open mantap in the temple premises.

To everyone’s surprise they found the main murtis of the temple – Bhagwan Parthasarathi, Satyabhama and Rukmini that were intact for almost 700 years! These main murtis were restored to their original place in the temple after performing the required rituals.

Preserving a country’s history is very important from the context of its age, civilisation, culture and tradition for establishing continuity and evolution. Sometimes certain historical facts get faded away from public memory due to various reasons. Govindaraja Swamy temple at Tirupati is one such examples but its history is fortunately restored.