Govt control of Temples issue : ex-CM of Uttarakhand not allowed to have darshan in Kedarnath! 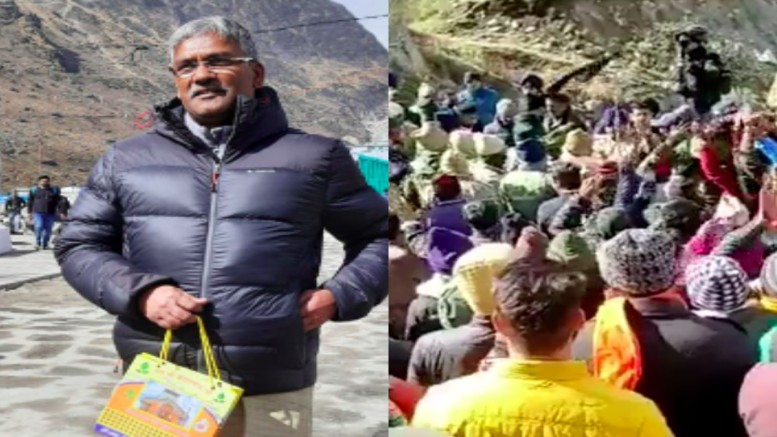 In a dramatic move yesterday, the priests of Kedarnath Jyotirlinga refused entry in the temple to Trivendra Singh Rawat, the former CM of Uttarakhand. He faced protests from the priests who shouted slogans against him and forced him to go back. On the same day, priests also protested against visit of state BJP President Madan Kaushik and Cabinet Minister Dhan Singh Rawat. Although, both of them could visit the temple and avail the darshan of Mahadeva.

Trivendra Singh Rawat later tweeted about the incident in cryptic terms, when he said that he did “antardarshana” of Kedarnath and prayed for everyone’s good.

The standoff between govt and priests

The conflict between the Uttarakhand government and priests has been going on since 2019 when the government of Trivendra Singh Rawat passed the Devasthanam Board Act to take over 51 temples under government control. These 51 temples included the famous temples of Badrinath, Kedarnath, Gangotri and Yamunotri along with scores of other ancient temples.

The control of government means that traditional servitors of the temple are deprived of their rights, although they are expected to fulfil their responsibilities. The act forbids any part of the money in hundi to the pujaris while also not making any provision for any salary to them. The board to be constituted under the act includes, even today, non-Hindus while the act is applicable only on Hindu temples! The board can give directions to the priests and on not being followed, can remove them from their duties. Recently, it decided that in view of CoVID, the morning puja can be started only after 7 AM, while since time immemorial the puja starts early morning. Only after a lot a hue and cry was this illogical order taken back.

The IAS officers dominate the board and are exclusive members of the high level committee that decides everything about the Char Dham Yatra. There is no requirement for these officers being Hindu. Thus in theory, there might arise a situation that all the members are non-Hindu but running a Hindu Yatra!

As we had discussed in a previous piece, the arguments given in favor of the Chardham Board hold no water and are a manifestation of the anti-Dharmik tilt of the bureaucracy of the secular Bharatiya republic. The priests have been protesting against the decision of the government since day one and have undergone strikes, hunger strikes and even written letters in blood to the authorities to attract their attention. The new governments under Tirath Singh Rawat and Pushkar Singh Dhami had promised to resolve the issue with all haste.

This has led to the recent spate of aggressive actions by the priests of Kedarnath. In solidarity, the priests of Gangotri and Yamunotri also kept a strike on Monday against the Devasthanam Act. They have now threatened to oppose the visit of PM Narendra Modi on Nov 5. If this threat becomes the reality, it would not only be a big embarrassment to the Prime Minister, but also would send wrong signals to the Hindu voters of the state and the country. The incident would go down in history like the infamous Puri incident with PM Indira Gandhi.

The fact that BJP speaks against govt control of temples in Tamil Nadu and has done exactly the opposite in Uttarakhand threatens the credibility of the party, among its Hindu voters. The upcoming Uttarakhand elections in 2022 would present a tough challenge to the party if the issue is not resolved in accordance with wishes of local Hindus and taking into account the good management of the temples.