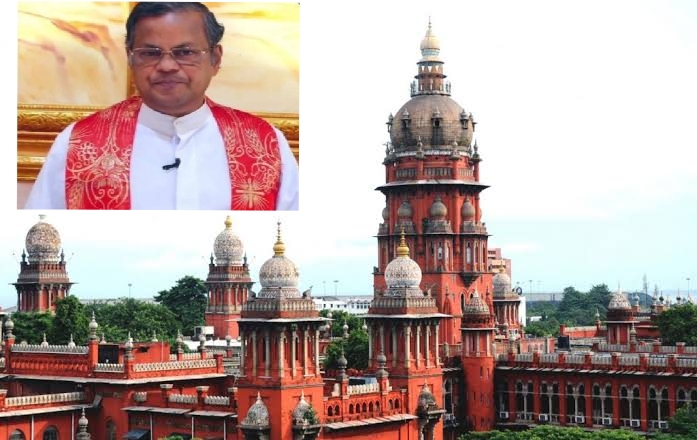 The Madras High Court has refused to quash the FIR against a Catholic priest who abused Bhuma Devi and Bharat Mata. The court said that offensive words against them attract the offense of hurting Hindu religious sentiments as believing Hindus consider Bharat and its land as deities. It further said that evangelists cannot have freedom of speech and expression to denigrate others’ religious beliefs

Parish priest of Pannaivilai in Kanyakumari was arrested in June 2021 for his derogatory remarks against Bhuma Devi, Bharat Mata, PM Modi and HM Amit Shah. In a meeting organised to pay homage to late urban naxal Fr.Stanislas Lourdusamy, the priest had issued a warning to Hindus. He was upset with BJP candidate MR Gandhi winning from Kanyakumari constituency in the assembly elections. As Gandhi doesn’t wear footwear out of respect for Bharat Mata, the priest drew pleasure in mocking him.

In the process he denigrated Bhuma Devi as well, saying Christians wear footwear so as to avoid catching scabies from Bhuma Devi. He also warned Hindus saying his community will reach 72% of population soon and Hindus should be careful. His speech went viral in social media and he was arrested by the police in Madurai while trying to abscond.

He had appealed to quash the FIR filed against him which was heard by the Madras HC recently. Justice GR Swaminathan who heard the petition refused to quash the FIR citing that being an evangelist the priest had intentionally poked fun at other people’s beliefs which attracts offense under IPC section 295A for hurting religious sentiments. He said, “He painted Bhuma Devi and Bharat Mata as sources of infection and filth. Nothing can be more outrageous to the feelings of the believing Hindus”.

The priest’s counsel had argued that he had only criticised Hindu Dharma along the lines of Dr.Ambedkar, not mocking it. However the court observed that being an evangelist the priest cannot “insult or outrage others’ religion or their religious beliefs” and expect to be treated like an academic, rationalist or artist whose fundamental right to freedom of speech is guaranteed under the Constitution under Article 19(1)(a).

LiveLaw reported the proceedings where the judge said, as the priest “views the other religionists as a constituency to be poached” and “targeted religionists are bound to take offence as they fear potential harm to their interests and well-being”, his speech has prima facie to be booked under section 295A. He also noted that it would attract offence under section 153A as well, for it clearly pitted Christians and Muslims against Hindus and would disturb communal harmony. It is not necessary that all Hindus must feel hurt by such speeches, for even those who call themselves as rationalists and atheists like Periyar aka EV Ramasamy are Hindus by certificate, he said.

Surprisingly, the judge made a note about the demography of Kanyakumari as well saying that the status quo must be maintained for a subversion of it may cause “calamitous consequences”. Observing that many converted Christians continue to hold Hindu caste certificates, the judge took exception to the priest’s remark that Christians would soon reach 72% of the population. Recalling the horrors of partition and denoting how it was on the grounds of religion he said, “the tryst with destiny can be achieved only if the multicultural character of the Indian society continues to remain”.

On that note, he said that even though what’s already happened cannot be reversed, “conversion cannot be a group agenda” and status quo should be maintained when it comes to demography. The judge’s views about academics, satirists and artists having the freedom to criticise and mock religious sentiments on educational, critical and artistic grounds have met with criticism. Nevertheless he has laid out important points which help level the field as abrahamic preachers have been having a free run denigrating Hindu beliefs so far.

As the core of the abrahamic faiths itself denigrates murti worship and calls for their demolition, the order gains significance. While the order doesn’t say that out loud, legal luminaries think there is a possibility for such understanding to be derived from the order when such offences are committed as a part of “doctrinal preachings”. Even though it would affect Hindu seers as well, their speeches are mostly in retaliation to the abrahamic aggression and makes way for a level playing field.

It is to be kept in mind that unlike Hindus who are independent to either follow or not follow a seer, abrahamic religions have a hierarchical structure of following where Christians and Muslims diligently follow their religious leaders. As abrahamic religious scriptures have inherent hatred for pagan worship, the order is seen as a great precedent in defining religious hate speech.