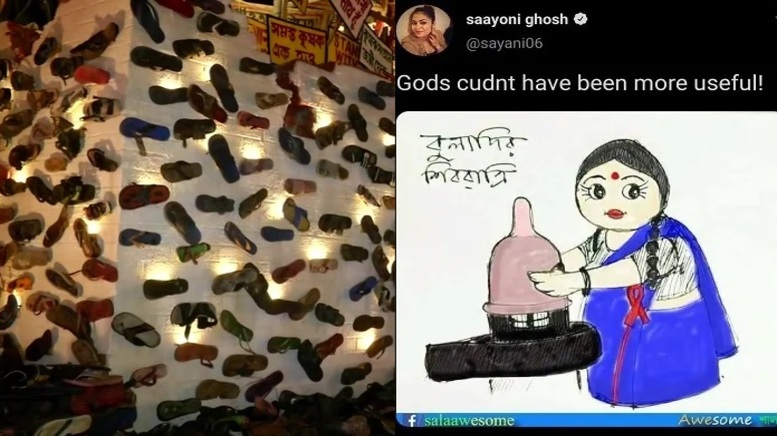 Violence rocks our neighbouring Islamic nation of Bangladesh. Durga Puja Pandals have been ransacked and murtis desecrated. Hundreds of temples, homes and shops have been ransacked, and at least 6 Hindus killed. Women have been raped and a 10-year-old girl has reportedly died after being gang-raped.

The situation is harrowing there and it all started from a fabricated blasphemy allegation. A copy of the Quran was placed by Islamists at the feet of a Sri Hanuman murti in one of the Durga Puja Pandals in Cumilla. Then those photos were made viral over social media to whip up a communal frenzy in young minds already primed with bigotry and supremacism.

On the other hand, there are Durga Pujas held in West Bengal where the organizers play the azaan, the Muslim call to prayers that claim there is no god but Allah, in front of the vigraha of the Hindu Devi-Devatas like Durga, Saraswati, Lakshmi, Ganesh and Karthik.

While mindless violence is not the Hindu way of life, it was expected that the Hindus in West Bengal will at least object to such degeneracy showcased in major puja venues. But, inebriated with the fallacies of secularism through the decades of Communist followed by pro-Islamist TMC’s rule, the Hindus of West Bengal applauded such slighting of the mother goddess.

Actress Sayoni Ghosh had attracted netizens’ wrath for posting a caricature of a Shivling with a condom on it on Twitter on the auspicious occasion of Shiv Ratri some years ago. Soon, the anti-Hindu TMC absorbed her into the party and gave her a ticket to contest in the Legislative Elections in May this year. Though Sayoni Ghosh lost the elections, she was promoted as President, West Bengal Trinamool Youth Congress which has admitted “celebrities” into its fold in the state to derogate the Hindu deities and symbols of Hindu Dharma.

As the country stands shocked at the brutal murder of Lakhbir Singh by Nihang Sikhs during the so-called “farmers protest”, there was a Durga Puja pandal set up in Kolkata by Dumdum Park Bharat Chakra puja committee dedicated to these protests. The organizers chose to decorate the puja pandal with footwear to win political brownie points, unmindful of the hurt caused to Hindus who do not even enter temples with shoes on.

While one gets beheaded for “insulting” the Quran or gets butchered for an alleged insult toward the Guru Granth Sahib, placing shoes inside a puja venue supposedly elevates one as an ‘intellectual’. This is the sad state of Hindu Dharma among a section of Bengali elites (aka antels) in a state which once nourished Hindu Dharma with great Dharmics like Sri Ramkrishna Paramhansa, Swami Vivekanda, and Sri Aurobindo among others.

Back in 2017, Bengali poet Srijato rose to infamy with his poem ‘Abhishaap’, suggesting that the Hindus are raping the Muslim women, digging their corpses from the graveyard, and ending the derogatory poem with two lines that translate to “When you will rape me after taking me from the burial ground, Your religious trident will be covered with a condom”.

When this led to a massive uproar and Hindu outfits tried to confront him, the controversial poet went on to claim that the protests were a sign of “rising levels of intolerance” in the country and that he did not feel secure here.

“People like us have no freedom of speech. The axe is falling on free thinkers. In my state I am secure, but we have to often go out for cultural programmes and recital sessions. I am shocked. I had not anticipated there will be such an incident in a place like Silchar. There was no inkling beforehand. There is an increasing effort to curb freedom of expression in the country,” he told reporters in Kolkata. The West Bengal government however rushed to assure protection to the 42-year-old ‘poet’.

Some Hindus of West Bengal, especially among the elites, have been severed from their religious roots and hence they were unable to perceive the heinous insult as an insult. The Durga Puja in this state has become a matter of pomp and show, and at times goes to the extent of dishonouring the essence of puja. This religious illiteracy has been exploited by Durga Puja committees of popular clubs, who are in most cases dependent on the ruling party for their funds, to further the political agendas that benefit Mamata Banerjee.

The Barisha Club Durga Puja chose to spread anti-NRC propaganda by unabashedly misrepresenting the truth through the very pratima of Maa Durga. Using a clay-model of the Vigraha of 12th-century Dhakeswari Jatio Mandir (a famous Hindu temple in Dhaka) which had been shifted to Bharat during the partition to save it from the ire of the Islamists, the club wanted to convey a false message that a Hindu woman and her children have been caged in a detention camp in Bharat with Maa Durga’s murti in her lap, and they may now be shifted back to Bangladesh. So NRC and CAA, the very laws intended to give citizenship rights to persecuted Hindu refugees while evicting illegal economic migrants, are being twisted and demonized as anti-Hindu. Crimes of the Islamists which forced Hindus to flee Bangladesh have been accredited to the Bharatiya government.

Not only the clubs, but the entertainers and seasonal politicians in West Bengal have also denigrated Hindu deities, often going to outrageous lengths and yet they have escaped scot-free. With the state machinery encouraging Bengali Hindu ‘celebrities’ who insult Hindu deities, rituals or icons, the degeneration of Dharma is growing in West Bengal. And once a land is devoid of Dharma, the home-grown Islamists, as well as the ones pouring in from Bangladesh, will establish their rule of Islam. For seculars and Islamists, Bangladesh and West Bengal belong to the same canvas. The latter is just yet to be painted fully green.