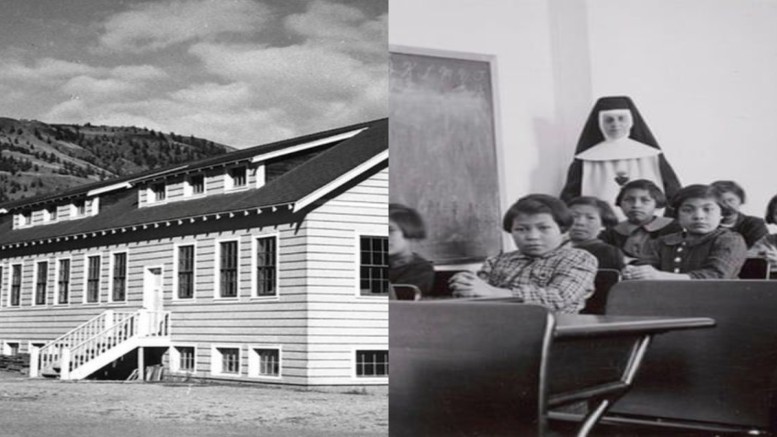 Yesterday, bodies of about 600 children were found buried in unmarked grave near the site of Marieval Indian Residential School. Not even one month ago, remains of 215 children were found buried at the site of a closed residential school in Canada. The school, in the province of British Columbia, was exclusively for indigenous children of the tribes which are called “Indian” in the North America due to a historical mistake made by early Europeans. Europeans imposing their culture, their religion and their mistakes on indigenous people is not a stranger concept to Bharatiyas.

To return to the Kamloops Indian Residential School, it was closed in 1978, but it was only one among the dozens of schools that was part of Canada’s residential school system. This system was started in 1830s. when the first schools opened and the last school was closed only in 1996. Apparently, the reason for opening these schools was “to civilise the natives” and make them Christians, something that also drove a lot of Englishmen in Bharat. From  Macaulay  and Charles Grant in 19th century to modern day Christian missionaries, the goal is to civilise us, in another words, Christianise us.

Coming back to Canada, the brutal school system first forcibly separated indigenous children from their families and sent them to the school, typically far away to minimise parental visits. The visits by parents were discouraged and even denied as these were thought to be a bad influence on children. In the schools, from the first day itself, the children were abused, dehumanised and forced to abandon all symbols of their identity.

Tens of thousands of indigenous children taken to Canadian residential schools run mostly by the Catholic Church were tortured and robbed of their childhoods. @amp6 spoke to survivor Ruth Roulette on @TwitterSpaces 👇

🔉 The history of the schools 1/6 pic.twitter.com/oVrc14siAa

In a recent interview, a survivor Ruth Roulette remarked how she was brought to the school first as a six year old, where she was stripped and her head was shaved. She was given a bath of DDT, which almost choked her with its horrible pungent smell. The abuse at the school was designed to erase their culture, their very identity and make them into good Christians. In her words “They wanted to make us into what they believe we should be“.

The residential school system is thought to have housed around 150,000 during the period of its operation. At one time in 1930s, about 30 percent of indigenous children were attending these schools. All of these schools, without any exception, were run for the government of Canada by various denominations of the Christian Church. These schools not only deprived them of their ancestral languages and faiths, but also perpetrated horrible  physical and sexual abuse on the children. In fact, many of the remains in the graves are thought to be of children fathered by the teachers and Christian priests by raping girls in these schools. Such were the conditions in the school that in 1966 a twelve year old bright student named Chanie “Charlie” Wenjack preferred to run away and died of hunger and exposure while trying to walk 600 km back to his home!

It was thought that the “education” they received would assimilate them in Canadian society. However, the graduates from these schools were unable to fit into their own communities as they forgot their own languages and culture, while also being discriminated racially by white Christian Canadians. The education they got was useless and unable to provide them any real economic opportunities.

The students were kept in overcrowded, unhygienic and poorly maintained buildings where the death rate of children was more than that of Canadian soldiers in the second World War! In one school, the death rate was recorded as 69% at one time. Probably, the Russian Gulags would have a better survival rate. Sometimes parents did not see their children for years! Thousands of children died horrible, lonely deaths in these schools, far from home, away from parents and after death, were buried in secrecy. Till now, remains of about 7000 children have been located, with new discoveries every few months. A guardian report notes that these schools often had no playgrounds, but always had graveyards!

The result was complete disruption of the transmission of indigenous practices and beliefs across generations. The Canadian government did not stop there. These children were made guinea pigs and scientific experiments were conducted on them, which included keeping them undernourished and experimenting medicines and vaccines on them, without any parental consent. All this has led to an increased prevalence of a host of issues among the indigenous peoples of Canada including post-traumatic stress, alcoholism, substance abuse, and suicide even to this day.

A six year investigation into the system by Truth and Reconciliation Commission found that this system was “cultural genocide” and substantially erased the traditions and faiths of native communities in Canada. Instead of any real education and resulting economic opportunities, the result of these schools was restricted to “physical appearance and dress, like that of middle class, urban teenagers, or the promotion of a Christian ethic, that was used as a sign of successful assimilation.”

The above reminds one of the chilling agenda of Macaulay. In his famous minute of 1835, that has since determined the fate of education in Bharat, he said the goal of his education policy was to:-

“form a class who may be interpreters between us and the millions whom we govern; a class of persons, Indian in blood and colour, but English in taste, in opinions, in morals, and in intellect”.

Curiously, the Macaulay system started in Bharat in the same decade residential school started in Canada, under the same colonial power. Indeed, both of these were product of the same racist, bigoted Christian liberalism that saw natives as inferior to white Christians. In their minds, they were doing the natives a favour.

In Bharat too, such schools were established. Indeed, this was the feature of every British colony at that time. Till the 1970s, in Australia, they stole children from aboriginals and put them in white families to “breed out the colour“! In New Zealand too they opened native schools to erase native culture. The United States continued the tradition of their former overlords and boarding schools for natives were opened to “assimilate” i.e “Christianise” them.

The tribal rebellions of Bharat have their genesis in such schools which denigrated Hindu traditions and forced students to convert to Christian religion. Birsa Munda, who famously led the revolt of Mundas in late 19th century, was forced to convert to Christianity and change his name to Birsa David for admission into German Mission School. The experience led him to violently resist British, who always supported such missionary activities.

The demographic change in many islands of Andamans and even complete extincting of tribes like Jangil and Great Andamanese are a direct result of colonial interference. And yet, a few years ago we had another American missionary trying to sneak in the sentinel islands to convert and civilise the natives! The impact of such cultural genocide can most clearly be seen in north eastern parts of Bharat, where local cultures are in imminent danger of erasure.

Apology does not heal

The Canadians have apologised repeatedly for the crimes they committed against the indigenous people. However, apology does not heal the mortal wounds the native culture has received. Even today, in certain schools of Bharat, students are not free to talk in their native languages and not free to even display their religious identity marks. In Bharat too, there have been reports of deaths of children in certain residential schools even in today’s day and age. This has a remarkable parallel with what happened in Canada. However, till now there has been no proper attempt to reconstruct what happened in past in those missionary run schools.

The cultural genocide in Bharat has already completed its mission in many areas, but it is waiting to happen in other parts. The only reason we have survived thus far is due to the strength of Hindu Dharma and our huge population. Once the fate of our civilisation is sealed, no amount of apology would matter.