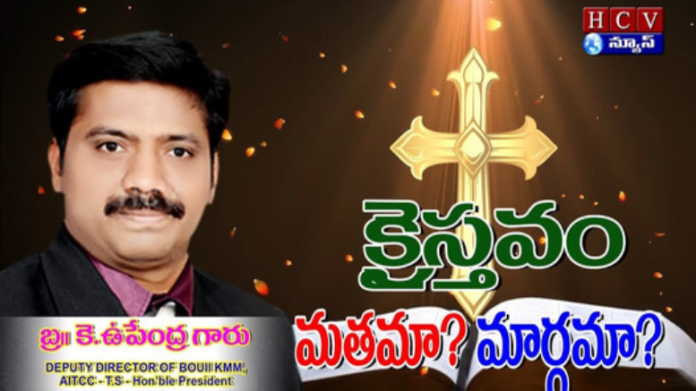 Following Congress’s attempts to stoke separatism by encouraging the concept of United States of South India, a Christian sect based in Andhra Pradesh has demanded a separate Christian country. The Deputy Director of Bible Open University International(BOUI), pastor K.Upendra has demanded that Christians be given a separate country by dividing Bharat.

Since Congress started using the North-South divide to exploit the fault lines of Bharat and acted as the agent of Breaking India forces, many abrahamic organisations and individuals have started demanding for a separate country along the same lines. When DMK stoked separatism by introducing the concept of the United States of South India, a separate country from Bharat, Congress encouraged it by amplifying it through left liberal media like The News Minute, The Wire, etc.

Now Christian pastors have taken the same line and want to carve a separate ‘Christian country’ out of Bharat. SC/ST Rights Forum, an advocacy group that works to safeguard the rights of SC/STs, has posted a video of pastor K.Upendra, Deputy Director of BOUI saying, “India should be split into two and one half should be given to Christians as a separate country”.

"Under the leadership of our beloved leader Mr PD Sundara Rao, we, on behalf of All India True Christian Council demand that India should be split into 2 and 1 half given to Christians as a separate country. We'll not bother you":
-K Upendra, Bible Open University International pic.twitter.com/BzVHtGkbno

While Kerala’s minority population has already crossed 50%, Andhra Pradesh is fast pacing to reach the same state as missionaries are given a free hand under Jagan Reddy’s rule. In 2017 another pastor Vijaya Kumar was arrested for cursing Hindus to hell and abusing Bharat Mata. Later he came out on bail and demanded a separate country for Christians.

It is the evangelists who are intolerant towards Hindus and sanatana dharma but they act like Hindus persecute them and want to chase them away from their own land. As the population of Christians keeps rising in the South, demand for a Christian country also is on the rise and the possibility of certain states becoming like the North Eastern states officially celebrating Missionary Day is a looming threat.