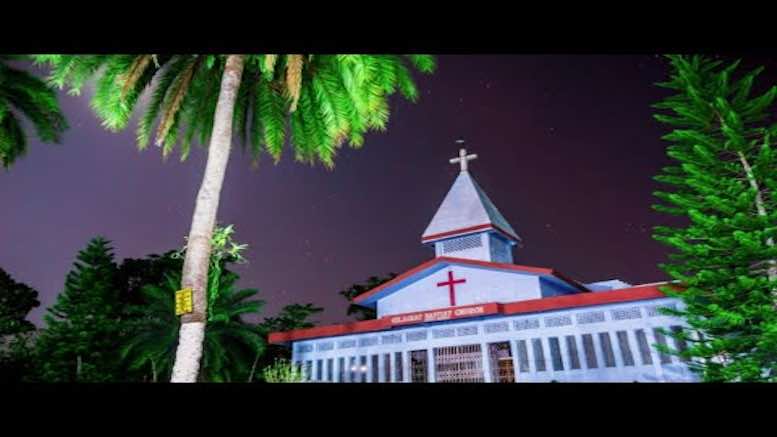 Another FCRA violation has come to light, this time allegedly by the Golaghat Assam Baptist Convention.

The abuse of foreign funding received under FCRA has been happening in full view for many years, but was ignored or diminished all this while by mainstream media outlets and ‘secular’ parties who are hand-in-glove with FCRA NGOs for the common agenda of ‘transforming’ the majority population.

The Church has made social justice and rights-based activism the new spearhead of their proselytisation efforts, ever since Pope John Paul II published a document titled ‘Compendium of the Social Doctrine of the Church’ in 2004. The lines between social activism and supremacist religious conversion work has been blurred in Bharat, and a pact has been forged between left-liberal activists and missionaries for this joint project of ‘civilising Hindus’.

In recent years, a few activist organisations have arisen that are challenging the Lutyens’ consensus and demanding that authorities act against those flouting the law. Legal Rights Observatory (LRO) is one such organisation, and in a twitter thread it laid bare the apparent fraud committed by the Christian organisation operating in Assam.

The thread is reproduced below –

“Golaghat Assam Baptist Convention got Rs 3.24 Crore from FCRA for a social cause but misused it for conversion. The Baptist Church ensured the prosecution of Dakhinpat Ashrami Satradhikar Majuli under fake charges which invited a strike.

CFCI, donor of Assam Baptist Convention, in their Facebook post, dated 29th July 2018, has bluntly and unapologetically declared their desire to reach every child in Bharat and convert them with the Gospel.

Under the Shining Stars Child Sponsorship Program, they aim to convert kids in Bharat to Christianity, which is a severe breach of child rights and is at par with the offence of child stalking. Sections of JJ Act could be invoked against it, should anyone approach National Commission for Protection of Child Rights for necessary action. 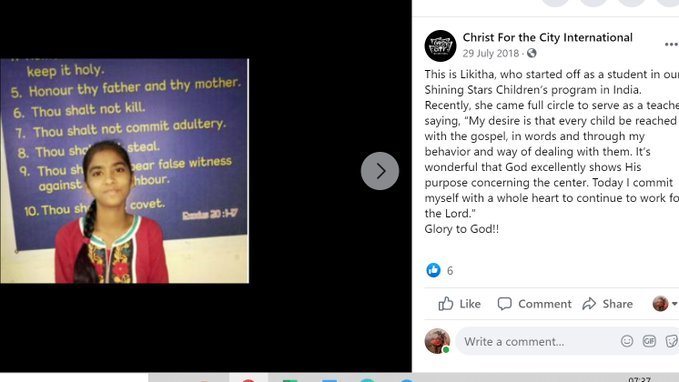 Board of International Ministries (BIM), USA, in the Financial Year 2019-20, donated to Assam Baptist Convention for undertaking evangelical programs, under “ABC Evangelical Programme Expenses”. No need to say that the plans are to wipe out our Shaivites/ Vaishnavites from Assam by destroying Satra System. 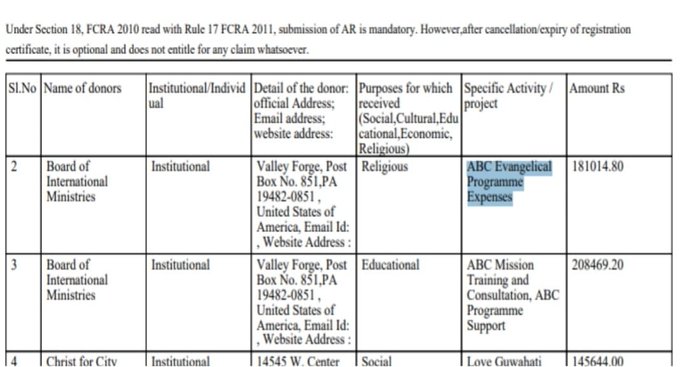 It must be noted that even though the FCRA Act allows for receipt of foreign funds for religious purposes, it expressly prohibits use of funds for anything ‘likely to affect prejudicially, harmony between religious, racial, social, linguistic or regional groups, castes or communities.’ It also mandates that organisations who receive FCRA license should not be involved in ‘conversion through inducement or force, either directly or indirectly, from one religious faith to another.’

Targeting children for religious conversion is a heinous act, both legally and morally.

In September, the Home Ministry introduced some amendments to the FCRA Act to ‘prohibit acceptance and utilisation of foreign contribution for any activities detrimental to the national interest and for matters connected therewith’. This was done after it was found that the annual inflow of foreign contribution has almost doubled between the years 2010 and 2019, but many recipients of foreign contribution have not utilised the same for the purpose for which they were registered or granted prior permission under the said Act.

This amendment was greeted with a howl of protests from the NGO lobby (including likes of Oxfam India), ‘civil society’ actors, and ‘secular’ politicians.

Last year, LRO had also filed a complaint against alleged Baptist encroachment of satra (A satra is a Vaishnav monastery and Hindu religious centre, unique to Assam and adjacent regions) land in Majuli, the hub of Vaishnav sampraday (community) in Assam.

Audacity of Baptist missionaries can be seen in the way they filed a case against the head priest of the iconic Dakshinpat Ashromi satra, Janardan Deva Goswami,  accusing him of ‘preventing spread of Christianity’. Shockingly, an Assam court jailed the head priest in this case, before granting him bail.