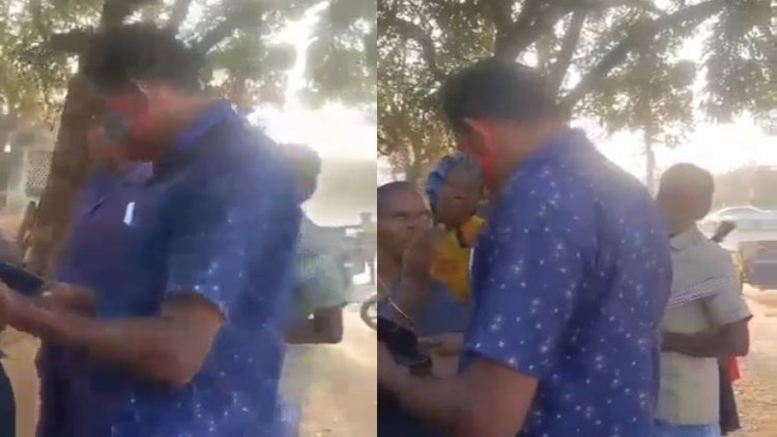 Even as the death of a Hindu girl in Thanjavur due to conversion attempts is being downplayed by the media and DMK government, another incident of attempt to convert by enticement has come to light. Sanitation workers of Thanjavur corporation were reportedly approached by a man who said Rs.3 lakhs will be offered to those who embrace Christianity.

In a video doing rounds in social media, a few female sanitation workers can be seen speaking with a man. The man says “they gave me Rs.3 lakhs. Who will give Rs.3 lakhs in Thanjavur?”. A woman asks “For what?”. He replies, “No reason. They gave me as Kaimathu (Kaimathu means getting money from an associate without having to pay interest or any limits on when it is to be returned). I asked him.”

He further says, “Jesus is the god who created us. All of us are his children and everyone has a skill set of their own. We are suffering because we don’t like him. I was doing roof laying work when I came to Thanjavur in 2000. Who does that? Who will give money just like that? Will anyone give Rs.3 lakhs just like that? Without interest? I’m saying for real. If you embrace Jesus you’ll get..(inaudible)”. Malai Murasu portal which first reported the incident, says that the man is one Perumal who works as an assistant to the Health Inspector of Thanjavur Corporation. It also reported that Hindu Munnani, which came to know about it, lodged a complaint with the Commissioner of the Corporation.

People belonging to the economically weaker section of the society are often lured by missionaries with enticements like money, good job, education for children, etc. This incident seems to be one such. The man can be seen showing something in his phone while saying that he received Rs.3 lakhs to convince the ladies. This comes as a proof of rampant conversion going on in the state contrary to the claims of the ruling party DMK.

The government tried to suppress the death of Lavanya, a 17 year old girl, who consumed poison unable to bear the harassment she was subjected to for refusing to convert. Her parents accused the nuns of offering money to convert. Initially the police department said that there is no conversion angle even before the investigation was completed dismissing the video where she told about it on her deathbed. The minister of School Education and the minister of Women Welfare and Social Defence told the same to the media in an attempt to divert the investigation.

But the girl’s parents had gone to court against TN police investigating it and demanded a CBI inquiry. The Madurai bench of Madras High Court which heard their petition directed the case to be handed over to CBI and observed that the conduct of police and ministers show that there is no place for an independent inquiry. Now another such incident of luring innocent Hindus with money and better prospects has come to fore.

Many arrested, including women, for illegal religious conversion attempt to Christianity: Uttar Pradesh