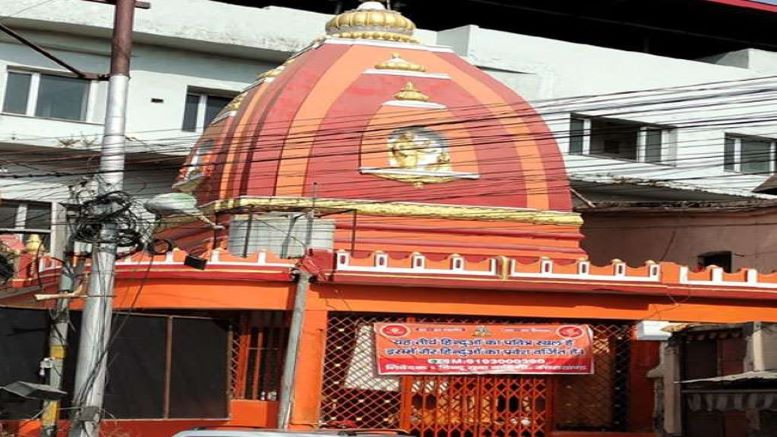 Uttarakhand temple authorities have initiated action against Hindu Yuva Vahini for putting up banners barring entry of non-Hindus following the Dasna incident. This is yet another assault on Hindus by government-controlled secular temple administration despite the fact that instances of temple desecration has been increasing across the country.

Uttarakhand | A banner was put up outside temple in Ghanta Ghar, Dehradun stating that 'Entry of non-Hindus impermissible here'. Temple authorities denied knowing about it. Banner removed, case registered under Sec 153A against person whose no. was on banner: Kotwali Police pic.twitter.com/3aK1uaSiDS

At a time when temple administration should concern itself with the serious issue of Hindu temple desecration, instead of protecting temples the General Secretary of Hindu Yuva Vahini has been booked under IPC Section153A (promoting enmity between different groups on grounds of religion, race, place of birth, residence, language, etc., and doing acts prejudicial to maintenance of harmony).

Apart from removing the banners, the administration is believed to have admonished the members for disturbing communal harmony and has warned them not to repeat the act. The organization had put up posters barring entry of non-Hindus in around 150 temples in Dehradun between Saturday night and Sunday morning.

It must be mentioned here that these banners were put up only in smaller temples across the city and banners were neither put up in any of the major temples nor were temple authorities in those temples aware of any such incident. A team of police and administration authorities headed by SDM Gopalram Binwal inspected temples under the instruction of District Magistrate Dr. Ashish Srivatav.

The banners were removed from those temples where they had been put up with the help of the said temple committees. Police inspector Shisupal Rana filed a case against Yuva Vahini General Secretary Jitu Randhawa for inciting communal disharmony. In the meanwhile, State President of the organization Govind Wadhwa has said that the organization will make all necessary efforts to bar entry of non-Hindus into Hindu temples. They are set to launch a movement across the state for the same.

Srivastav on his part has issued a statement saying that immediate action was initiated after the administration came to know about the incident and that strict action will be taken against any individual or organization attempting to disturb the communal harmony of the state by undertaking such actions.

An appeal has been made to maintain the communal harmony of the state. SSP Dr. Yogendra Rawat has opined that it is a crime to incite communal passions. Besides having all such banners removed, subordinates have been instructed to keep an eye and ensure that action is taken against those indulging in such acts.

President Bhim Singh Pundir of Shrisiddha Hanuman Temple Balaji Dham in Jhajra has said that there is no restriction on anyone wanting to take darshan of the deity while adding that if such a demand is made then we shall decide upon the same after discussing it with the temple committee. Chief Surendra Agarwal of Panchayati Temple committee has issued a statement saying that the temple doesn’t reflect the individual views of any organization.

Such actions by the secular state government machinery besides hurting the sentiments of the Hindu community also highlight the apathy of the secular administration and brings to the fore why government control of temples needs to be stopped. While the administration has failed to ensure the safety of temples, it has wasted no time in registering cases against members of Hindu community merely protecting their sacred spaces.

Mandirs are not Govts' secular properties.
It's our privilege to decide rules/regulations of our Hindu Mandirs entry to non-Hindus.

Don't try to suppress our Rights by abusing your power.https://t.co/e5Z364Uo8B

While we have seen time and again government interference in Hindu temple administration such as that in Sabarimala or Uttarakhand temple take over, the administration conveniently looks the other way as far as mosques are concerned even of mosques belonging to one Muslim sect bar entry of other fellow Muslims themselves.