A Journey Through Well-Known Devi Shakti Temples Across Telugu States With Navaratri going on, lets take a look at some of the well-known Shakti (Devi) temples in Telugu states of Andhra Pradesh and Telangana. Apart from these temples, almost every village and small town has a guardian deity, called as Ammavaru or Ammoru.

As per the Puranas, when Sati died, a grief-stricken Shiva, carried her body, performing the Tandava in anger. When the gods implored Vishnu to save the world from Shiva’s wrath, he cut Sati’s corpse into pieces with his Sudarshana Chakra.

The places where parts of Sati’s corpse fell on earth are considered as Shakti Peethas, sanctified by the holy presence of Devi Maa. There are around 51 Shakti Peetha of which 38 are in Bharat, while Bangladesh has 5, Nepal 3, Pakistan 2, and Bhutan, Sri Lanka, Tibet 1 each.

Apart from the Adi Shakti Peethas, there are 18 Maha Shakti Peethas, which are mentioned in the Ashta Dasha Shakti Peetha Stothram by Adi Shankara. Of these 2 are not in Bharat – Shankari Devi at Trincomalee (Sri Lanka) and Sharada Peetha at Muzaffarabad (POK).

The 18 Maha Shakti Peethas roughly speaking are as follows

The Sharada Peeth in Muzaffarabad, POK is mostly in ruins now, while Kamakhya is considered as both an Adi Shakti Peetha and Maha Shakti Peetha.

Of the 18 Maha Shakti Peethas, the 3 are considered are the most sacred.

When it comes to Telugu states, the most prominent of them is Brahmaramba at Srisailam, which is also one of the Jyotirlinga Kshetras where Shiva is worshipped as Mallikarjuna. This makes it one of the holiest spots for Hindus. It’s believed that Hiranyakasipu, the Asura ruler, did his penance to Shiva here at Srisailama, where Ahobilam was where he held court. Rama and Seeta in Treta Yuga, the Pandavas in Dwapara Yuga, visited this place during their exile, there is a pond named after Bhima here.

Srisailam is also believed to be one of the 3 Shiva Lingas that make up Trilinga Desham, the older name for Andhra/ Telangana. The other two being Draksharama in East Godavari district and Kaleshwaram in Telangana. Since Shiva was worshiped mostly with Jasmines at Srisailam, he was called as Mallikarjuna (Malli in Telugu is Jasmine) or more colloquially as Mallana. Shakti is called as Brahmaramba as it’s believed she worshipped Shiva in form of a bee (Brahmara) here.

Historically speaking the Vishnukundins were the earliest devotees of Mallikarjuna Swamy, during the Kakatiya rule, they contributed to the temple’s growth, the vimana gopuram was believed to have been constructed by Mallamadevi, sister of Ganapatideva.

Srisailam’s Golden Age was during the rule of the Reddy Rajulu. Prolaya Vema Reddi constructed the pathway to the temple as also to the Patalaganga. The Vijayanagara rulers made major contributions, especially the Mukhamandapam and Southern Gopuram.

Srikrishna Deva Raya, visited Srisailam in 1516 AD, after his successful campaign against the Gajapatis, and constructed the Salumandapas here. He also constructed the Rajagopuram.

Chattrapathi Shivaji visited Srisailam in 1674, restored the temple to its glory, which had fallen into neglect after fall of Vijayanagara. There is a statue of him at Srisailam, and there is also a Shivaji Mandapam at Srisailam in his honor. 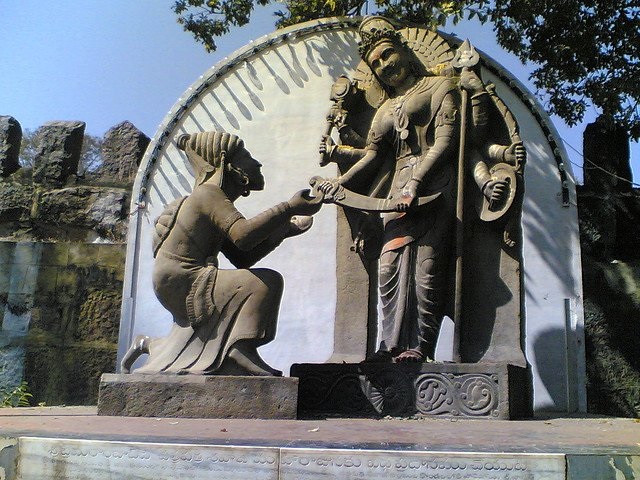 Jogulamba temple at Alampur in Mehboobnagar district (now Jogulamba Gadwal), Telangana is the other Mahashakti peetham in Telugu states. Sati’s upper teeth are believed to have fallen here, this is also called Navabrahma Theertha, Shiva is worshipped here as Brahmeswara. 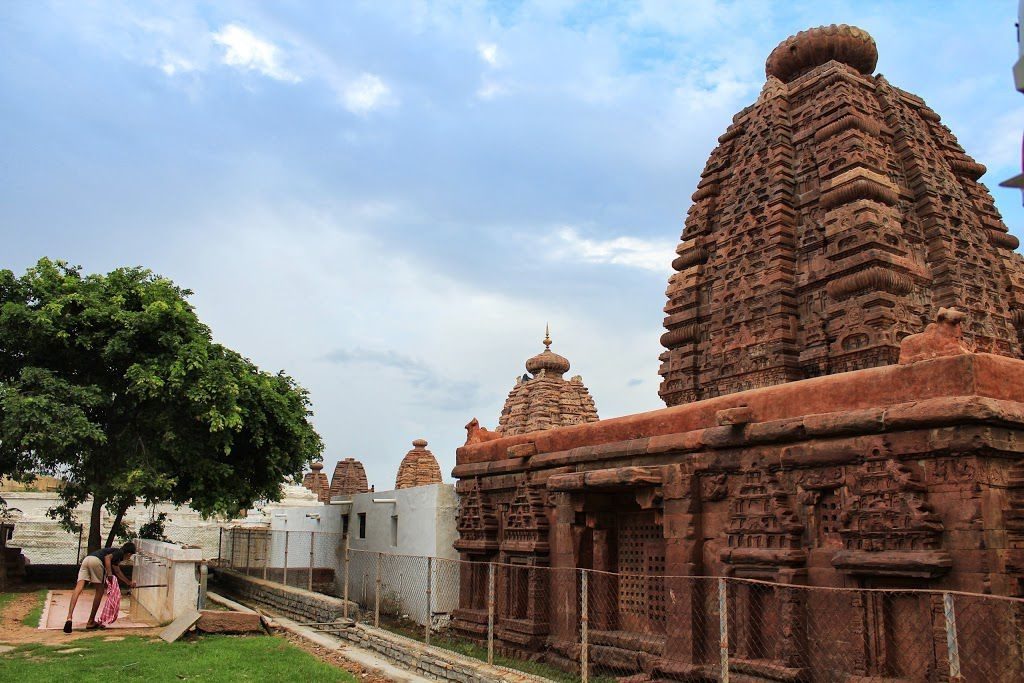 Alampur Navabrahma Temples are a cluster of 9 temples dedicated to Shiva, located at the Sangama of the Tungabhadra and Krishna rivers, making this a very holy spot. Built by the Badami Chalukyas, these temples are known for their architectural excellence.

Sangameshwara Temple at Alampur is the most well-known at Alampur, constructed by Pulakesin I, in typical Chalukyan style. It is situated at Kudaveli, where the Sangama of Krishna and Tungabhadra rivers takes place, somewhere in the 7th century.

The temples at Alampur bear the typical Badami Chalukya style of architecture, which typically tend to have a smaller gopuram, in contrast to the large ones you have down South. This kind of style in found in North Karnataka, primarily Badami, Aihole, Pattadakal.

The Navabrahma Temples at Alampur are as follows:

Jogulamba Temple at Alampur is one of the 18 Mahashakti Peethas. This has Shakti in a rather fierce form, sitting on a corpse, with scorpion, frog and lizard on head. As she grants Siddhi in Yoga, she was called Yogulamma, meaning mother of Yogis, Jogulamba is the local name. This is considered her Ugra Rupa. This temple was attacked by the Bahmanis in 14th century, however the murthi of Jogulamba was shifted to Bala Brahmeswara Temple, that is why it’s called Jogulamba Balabrahmeswara.

Jogulamba is flanked by Chandi, Mundi. The original murthi was shifted to a new temple in 2005, a beautiful one with granite flooring surrounded by water. The locals state that since Jogulamba is Devi’s Ugra Rupa, the water is meant to cool the atmosphere around her.

There is a small Yellamma temple too near Jogulamba temple. It’s believed to be where Parashuram killed his mother Renuka and she came back to life here. Locals worship Renuka as Yellamma in Telangana, and one can find many temples dedicated to her there.

The next two Shaktipeethas in Andhra Pradesh, are both located in East Godavari district- Manikyamba at Draksharama, which is also one of the Pancharamas and Puruhatika Devi at Pithapuram near Kakinada.

Surrounded by lush green paddy fields, Draksharama is one of the Pancharamas- 5 Shiva Temples located at Amaravati (Guntur district), Samarlakota (East Godavari), Palakollu and Bhimavaram (West Godavari). These Pancharamas are called so as they are believed to be places of rest.

Apparently when Kartikeya battled Tarakasura, he could not kill him, as the latter had the powerful Shiva Linga with him that protected him. Vishnu, then advised Kartikeya to first shatter the Shiva Linga, and then kill Tarakasura. However, he also warned that it would grow very fast. Kartikeya shattered the Shiva Linga with his spear, and the 5 spots where the pieces fell were the Pancharamas. However, he had to ensure that the Lingas had to be stopped, as they grew rapidly, and so the Devas hammered nails there. This is why the Lingas are very tall here.

Shiva is worshipped as Bhimeswara at Draksharama Temple, and the Linga here is almost 2 storeys tall. Incidentally the infamous Daksha Yagna was believed to have been conducted here, and so no Yagnas to date are conducted at the temple here.

Draksharama is one of the Mahashakti Peethas, where Sati’s left cheek is believed to have fallen. As per some versions Manikyamba is believed to be a more corrupted version of Mainakadevi, daughter of Himavanta. The more popular version states that Manikyamba was the daughter of a prostitute, and decided that she would marry Bhimeswara only. After severe penance, Shiva was pleased with her devotion, and she became his consort. This was mentioned by Telugu poet Srinatha in Bhimakandam.

Also in Draksharama you have the Ashta Someshwara temples, smaller Lingas consecrated by the Sapta Rishis. Initially the Shiva Lingam had such intensity that the Rishis were not able to approach it. So they installed Lingas in 8 directions, that would cool the intensity.

Draksharama Bhimeswara Temple was built by the Chalukyan ruler Bhima, which also accounts for its name. Also there is a pond Sapta Godavari, believed to contain waters from the 7 tributaries of the Godavari, consecrated by the Sapta Rishis to worship the Shiva Linga.

The other Maha Shakti temple is that of Puruhutika Devi at Pithapuram. The place incidentally get its name from here, it was called Pithikapuram, and believed to be place where Sati’s left hand fell. Shiva is worshiped as Kukkuteswara Swamy here.

The Shiva Linga at Pithapuram is in the shape of a cock, and so he is called as Kukkuteswara Swamy. This place is also one of the Tri Gaya kshetrams, so-called after Gayasura, an Asura who was a devotee of Shiva. This is called as Pada Gaya, as his feet were here.

Puruhutika Devi at Pithapuram, has 4 hands, that contain a bag of seeds, an axe, a lotus, and a dish. Incidentally there were 2 sects worshiping her – one as Puruhita Lakshmi, following a Samyachar worship, another as Puruhitamba which followed a Vamachara worship. 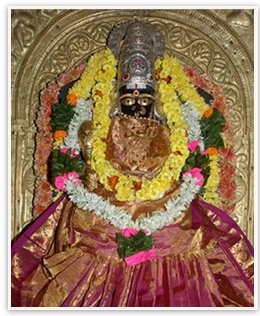 Also it’s believed Indra prayed, to Devi here at Pithapuram, after being cursed by Rishi Gautama, for seducing Ahalya. He prayed to Puruhitika Devi and was blessed with his original form. Also Jagadguru Sripada Vallabha an incarnation of Dattatreya was born here.

Both Draksharama Temple and Puruhitika Temple at Pithapuram are quite close, and one visit them from either Rajahmundry or Kakinada.

Hindu Dharma worships feminine energy as the divine form. Devi Shakti, in her various forms, is the epitome of women empowerment.

(This article has been collated from the tweet thread of @GabbarSanghi )