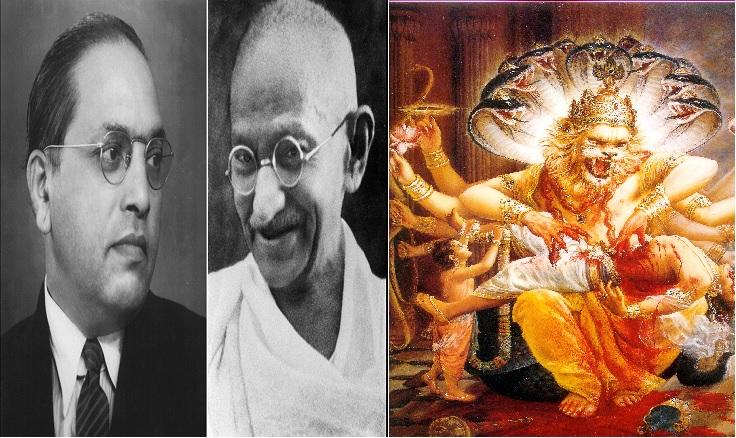 “Freedom from Dogma makes a forcible appeal to me in as much as it gives the votary the largest scope for self-expression” – Gandhi.

Hindu culture is considered liberal, assimilative and welcoming of all religious streams irrespective of whether they originated in this land or not and whether they have the qualifications to strike a chord with the canons of Hindu Dharma.

A lengthy literature is available by noted scholars to show that the integration capacity of Bharat is unmatchable. However, this conclusion, based on the analysis of selective literature, is harmful for the reason of losing essence of seed thought of the civilization. No surviving civilization in the world welcomes cart blanche, rather it opposes and therefore survives.

Societal subsistence is attributable to untainted continuation of its core values, and a theory of natural selection applies to all those who desired to assimilate. Anything inconsistent with the tenets is bound to fall by the way side, otherwise a tag of long-lasting civilization would be compromised. The example of United States of America proves the point. A mass elimination of aboriginals by Anglo-Saxon culture established foreign civilization to such an extent that the aboriginals are today not in a position to claim their rights over the country.

Labeling Bharat/India as a ‘liberal nation’ is actually an injustice to those national characters who sacrificed their lives for the protection of Bhartiya moorings. From Vedic era to medieval history of Bharat, several attempts have been made to challenge the unnecessary liberty expected to be given to the enemies of Bharat, and it is interesting to note that many times those who challenged our ethos were dubbed as enemy and it was considered perfectly legitimate to kill them.

In Bhagwat Geeta, when Arjun asks “Do not confuse me by placing before me several courses of conduct, but point out to me definitely only one course, which is the proper course”, Sri Krishna convinces him to wage a war against the enemies of civilization. Bhagwad Geeta is not a solitary piece but a milestone in this journey. Hindutva without its fundamental principles is like a nebula which can never be solidified.

Some enticing arguments in support of liberty and freedom cherry pick certain examples from Bharatiya history, but most of these examples are of saints who are either speaking on spiritual matters, totally out of context, or of kings of dubious distinction. We have always had tolerance for criticism, whataboutery and discussions, proof of which can be traced in the acceptance of Charvaka as a philosopher. However, common people of this land were so wise by imbibing Vedic prescriptions that they never accepted Charvaka as their hero.

Rishis, Bhagwan Vishnu and his incarnations were meant for the protection of Vedas and culture established on its premise. Those who quote Kabir or Buddha or Mahaveer should read ‘Dashavataram’ between the lines. Whenever ‘Asmita’ of Bharat was under challenge, these incarnations of Bhagwan Vishnu stepped in to rectify things with full cooperation from contemporary rishis and sages.

The famous story of Hiranyakasipu testifies Bhagwan Vishnu’s role as protector of Vedic culture. After the decimation of his brother Hiranyaksha, Hiranyakasipu ordered to kill all learned Brahmins not only to avenge but to throw a spanner in the spread of Vedic system taking firm roots among commoners as a result of consistent efforts by the Brahmins and demigods.

He specifically instructed them to go to the places where there was good protection for cows and Brahmanas and where the Vedas were studied in terms of the varnashrama principles. At the urging of Hiranyakasipu, demons went berserk and became unstoppable in their killing and arson, and caused immense damage to mother earth.

Here, the important aspect is cultural attack by Hiranyakasipu and his full-blown attempt to destroy Vedic set-up established by efforts of innumerable sages. Hiranyakasipu went further by nurturing ambitions to become immortal, free from old age and dwindling of any of his bodily senses, similar to the contemporary Asuric ambitions of human beings. On the whole it was against the order of Vedas and therefore inviting social and natural imbalance, hence he was killed by Sri Narasimha.

The incarnation of Bhagwan Vishnu as Sri Krishna has another significance as his every act has the intention of saving Bharat. Sri Krishna’s enmity towards Magadha was due to the immoral ambitions of its king, Jarasandha, who successfully subjugated several small kings with the help of his huge army and physical potential. His warmongering endangered the security of Bharatvarsh and he was so shameless that to nix Sri Krishna, his sworn enemy, Jarasandha invited the foreign ruler Kaalyavana to this holy land. It was an out and out rebellion against Bharat and its civilization. Though Sri Krishna himself observed providential limitations on not killing Jarasandha, he became instrumental in his perdition.

The exodus to Dwarka had a grand purpose too. Foreign traders with asuric slant frequented from Dwarka to Karveer (Kolhapur); consequently, local culture and people started shedding their Dharmik bent to wistful sensual pleasure. Sri Krishna, in his best efforts to restore Dhrama, settled down in this region of today’s Gujarat as he was aware that soft invasion on culture is far more dangerous than any other form. By living up to the same set of rules, Sri Krishna abandoned his own Yadavas against the Pandavas for their alienation from Dharma.

Dharma being an élan vital should be protected at all cost. Only those foreigners who did not challenge Dharmic rules of this land, rather accepted great many threads of it, have been assimilated. Hence, in this land of Bharat, liberty is not a gate pass to mangle its quintessence, but a precious virtue to part away follies, buttress co-operation through exchange of thoughts and ideas on equal footing. However, turning liberty into an instrument of oppression against Dharma and its practitioners is politics of self-interest.

Hindus should be made aware about this distinction when Left-Liberals throw their distorted arguments about Hindu Dharma (Hinduism) at Hindus and impress upon them their ideas to attain political goals, which is part of the larger game plan.

When Al-Qaeda and ‘Liberals’ are on the same page, you know just how much Hindus are in danger; and why we’ll lose even though...