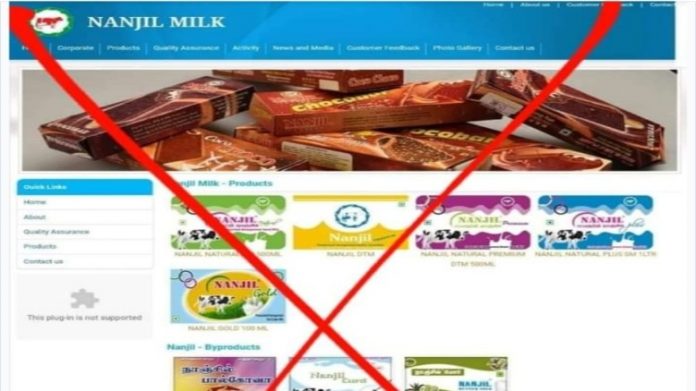 Pastor George Ponnaiah of Pannaivilai parish had spoken about Hindu deities and Bharat in a very degrading manner and challenged Hindus to try stopping the Christian community from growing. After widespread protests and numerous complaints filed in various parts of the state, he was arrested by the police. However he complained of weak health and was admitted to a hospital.

His speech went viral on social media as a result of which Hindus of Kanyakumari seem to have boycotted the products of Nanjil Integrated Dairy Development Company which is run by the diocese of Kuzhithurai. The company issued a clarification saying that George Ponnaiah isn’t connected to or in any position of the company. It specifically mentioned that it is under the administration of Kuzhithurai Bishop and that another pastor Jerald Justin had been appointed as the director by him for administrative purposes.

Interesting public notice from Mulagumoodu Nanjil Milk Company. Looks like local ppl hv shown some hesitation to patronising this company due to the speech of Parish Priest Fr. George Ponnaiah (now arrested); People seem to have associated him with this company. The notice 1/n https://t.co/yaYLDFSWqw

It was started as a cooperative movement by Rev.James Thomber, a Belgium missionary, in 1954 as a part of Rural Motivation Programme. It formed associations of farmers, women and other groups in Kanyakumari district supposedly to improve their economy. It was merged with the Kottar Social Service Society(KSSS), which comes under the Kottar diocese, in 1982. KSSS is an FCRA NGO.

The dairy plant has a Catholic priest Jerald Justin as it’s managing director. The company was registered in January 2013. However, the Kottar diocese NGO received funds from foreign organisations as early as 2009 for the purpose. Both Kuzhithurai Integral Development Social Services(KIDSS) and Marthandam Integral Development Society(MIDS), FCRA NGOs, that operate in Kanyakumari still receive funds from Manos Unidas for ‘dairy and cattle rearing activity’.

With the profit earned from the milk plant Nanjil Catholic College of Arts and Science was established in 2012. Another FCRA NGO Kuzhithurai Integral Development Social Services(KIDSS) was also involved in building this institution.

Nanjil Career Academy operates in the premises of the dairy plant. Now, the CBSE school is being managed by St.Joseph Nanjil Farmers Association which is another FCRA NGO. Sahaya Dhas, one of the board members of the NGO, is also the Financial Administrator of the school.

Coming back to the dairy plant, it’s directors Fr.Jerald Justin and Fr.Andrew Varghese are listed as the directors of 3 more companies namely, Xavier Nanjil Milk Producer Company, Nanguneri Milk Producer Company Limited and Nanjil Agro Products Development Foundation. These companies are dotted over Tirunelveli and Kanyakumari districts. Fr.Jerald Justin holds the position of the Correspondent of an ITI run by Kuzhithurai diocese.

The question that whether all these businesses were established using foreign funds received for social service, as the vision and mission of the NGOs imply, or perhaps with the profit earned from the dairy plant as it seems to have been the first business venture of the diocese arises. It is unclear whether the foreign funds were directly used to establish the dairy plant which would be in violation of the FCRA law.

The impacts of this begins from bribing a family to convert to Christianity by means of economic support to brainwashing Hindu children in the institutions established with the profit earned through the dairy plant. Knowingly or unknowingly by beginning to boycott the products of the church’s dairy company, Hindus of Kanyakumari have taken a step on the right path. The issue on the other hand gives a view to Hindus of other areas on how careful one must be in buying and promoting even the essentials.

(FCRA details are taken from fcraonline.nic.in)