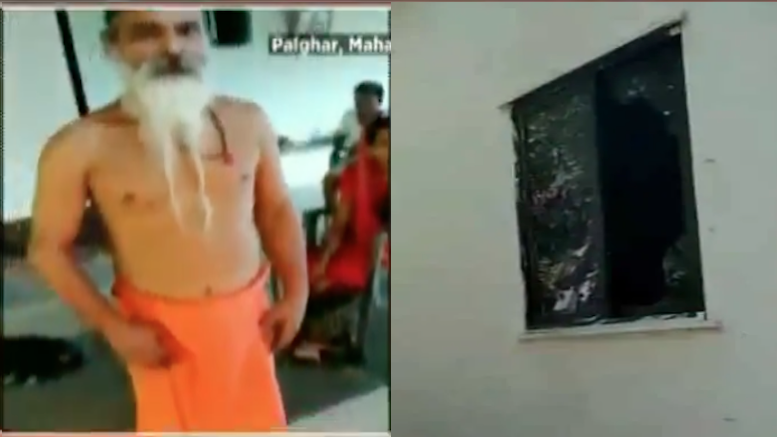 Just a month after the shocking mob-lynching of 2 sadhus and their driver, comes another news of an anti-Hindu hate crime from Palghar, Maharashtra.

As per reports, three unidentified assailants attacked two priests and looted a temple at Balivali in Maharashtra’s Palghar district –

“The incident took place at around 12.30 am on Thursday when three armed men barged into Jagrut Mahadev Mandir and Ashram at Balivali under Vasai taluka, an official said.

The trio attacked the temple’s head priest, Sankaranand Dayanand Saraswati ji (54), and his assistant Shyamsingh Somsingh Thakur (60) and decamped with valuables worth Rs 6,800, he said.

The trio also ransacked the temple, the official said.

The two priests, who received minor injuries, somehow managed to free themselves from the clutches of the assailants, he said. The main priest locked himself in one of the rooms of the ashram, while his assistant ran out of the premises, the official said.

An offence has been registered under section 394 (causing hurt while committing robbery) and other relevant provisions of the Indian Penal Code, the station house officer of the Virar police station said.”

Police has arrested 3 locals for the crime, although their names have not been released leading to speculation about their identities.

Shocked and grieving Hindus were lectured by the left-liberal-secular cabal to ‘not communalise’ the lynching of two sadhus and their driver, including a frail 70-year-old Kalpavriksha Giri Maharaj who was literally handed over to the mob by police. This despite enough signs that there were political and religious undertones to the lynching, with the most shocking aspect being the inability of a dozen-strong police contingent to control the mob.

Now, yet another Hindu temple has been targeted in the same area. If we consider the entire state of Maharashtra, a few days back 2 sadhus were brutally killed in their ashram in Nanded during another apparent robbery where killers decamped with valuables of around Rs 1.5 lakh after strangling Balbrahmachari Shivacharya Maharaj guru and his disciple Bhagwan Shinde.

Compare the muted response of mainstream media to these crimes, with the international outrage they created when few minor accidents/crimes took place with churches in Delhi just before the 2015 Delhi assembly elections – a short-circuit fire, children breaking a windowpane while playing outside, a drunken dare, minor burglary were built up into an ‘attack on Indian Christians’. Those incidents were so brazenly ‘communalised’, that Delhi’s Catholic Archbishop Anil Joseph Thomas Couto celebrated the BJP’s defeat in the subsequent Delhi elections – a clear indication that stray incidents were used to manufacture a ‘minorities under attack’ narrative.

Is talking about the attacks on Hindu sadhus, priests, temples in Maharashtra, and asking for justice from the ‘secular’ state government, ‘communal’?