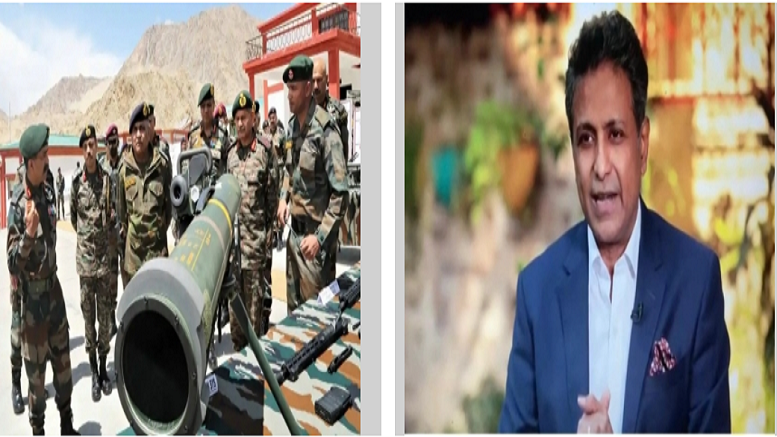 The border between Bharat and China remains hot due to Beijing’s insistence on keeping its military permanently deployed. Once again, China has begun to consolidate and rapidly build new infrastructure on the border with Bharat.

Even as Bharat matches pace with China on border infrastructure, it is also strengthening ties with the four-member Quad grouping — the leaders of which met last week in Tokyo for an in-person summit.

Indian Army veteran Probal Dasgupta, also the author of the acclaimed book, Watershed 1967: India’s Forgotten Victory over China, tells India Narrative that Xi’s ambitions force him to leave behind a legacy larger than Mao’s, hence he will not give up easily either on the Indian border or in Taiwan.

Q: Till as recently as 2020, India was a hesitant member in the Quad. But now India seems to have dived full-fledged into it. What has changed in the last two years to overturn Indian hesitation into one of determination?

Dasgupta: Let’s take a step back and contextualise the situation. India is the only country in the Quad to have a long land border with China and one that is disputed and complex. For years, India and China had issues along the border but didn’t break protocol. In 2020, China changed all that by violating the protocol and also displayed unprovoked aggression in Ladakh and in Sikkim. China began to influence neighbours against India in this period. Their aim was simple: pin India down and do not allow India to play a role in the Indo-Pacific. China realised that the Quad needed India to be operationally effective in this region. It launched a pre-emptive psychological and strategic offensive to keep India at bay.

India, on its part, stepped up its game against China and has responded boldly. Its ties with Australia have improved vastly and with Japan, India saw more common cause than ever. The realisation is that the group of democracies have to keep the strategic sea routes in the Indo-Pacific free of any military or political expansion.

India understands that future wars require coalitional support from allies and external balancing. In future, the Quad is the place where India’s security can be guaranteed under a multilateral military alliance.

I believe that China’s belligerence has revived a somnolent Quad.

Q: China is constructing a bridge on the Pangong lake in Ladakh. How do you view this development considering that India is pursuing peace talks while China is consolidating men, weapons and infrastructure on the Indian border? As the talks drag on, do you think India will eventually give up territory?

Dasgupta: The Chinese are constructing another bridge closer to the one built a few months earlier in the Khurnak Fort area. The bridges would disrupt any potential progress on resolution of standoff between the two nations. It also shows that China is ready to play the long game.

China has expanded its overall infra-architecture in the region. Border roads to bases, helipads, all-weather accommodation and blast pens for fighter jets has meant that China wants to build and maintain an infrastructure ready for war.

The disputed area was captured by Chinese forces before the 1962 war. So, in effect that area has been under Chinese control for many years. India has accelerated its infrastructure plans in the area and troop deployment has been enhanced.

China wants India to be engaged in the Himalayan region and thus pull India away from playing a greater role in Asia, especially the Indo-Pacific. It’s a subset of China’s larger plan.

Q: How do you think China is assessing the Russia-Ukraine conflict vis a vis its plans of conquering Taiwan? Do you think its determination might have dimmed by now?

Dasgupta: China’s unification ambition needs to be backed by a confidence to wage its first successful military campaign in 60 years.

Xi emphatically has voiced his goal of one China, one system, a unification with Taiwan can only be an outcome of invasion and occupation. Since the war began, China has followed its progress and even tested the West’s keenness and appetite on Taiwan.

China is aware that Taiwan’s hold over the semi-conductor chip industry and their potential ability to self-destruct in case of war can derail China’s outright invasion plans and dismantle the Chinese IT sector and economy that’s dependent on Taiwan.

China held two large scale military drills around Taiwan after Biden’s visit. China is good at messaging, posturing and at salami slicing. It will continue to bully and mount pressure on Taiwan.

What could China do? Will China invade or they won’t? Is there a third possibility?

In January this year, 34 Chinese fighters plus four electronic warfare aircraft and a single bomber flew close to the air defence zone prompting Taiwan to scramble its fighter jets. Taiwan fears some of its islands that are separated from the mainland, such as Dongyin and Penghu could be vulnerable to Chinese excursions.

The island of Kinme is barely a couple of kilometres away from the closest Chinese-controlled outpost. The PLA could capture some of the vulnerable offshore islands and coerce Taiwan into concessions, if it feels that a full-scale invasion of Taiwan might bring the US and China into a direct conflict.

China’s determination will not dim, since that will mean Xi will then have to leave a legacy lesser than Mao, which isn’t in keeping with Xi’s plans of reunification. China will try and develop situations and levers to limit the ability of the US, Japan and India to influence China’s plans on Taiwan before they carry out their reunification plans.

Q: In Europe, Putin’s gamble of keeping Ukraine away from NATO might have backfired as Sweden and Finland have signed up for membership. However, Turkey is not playing ball there. Do you think as the number of friction points increase between the US and Turkey the latter might be thrown out of the grouping?

Dasgupta: Turkey earlier was the sick man of Europe. Today it is the odd man of Europe – a radical authoritarian government in a democratic grouping of NATO.

Turkey is unlikely to be thrown out of NATO. If the US had to do so it would already have done that as Turkey has destabilised Syria and the Caucuses. It intervened in the Armenian conflict siding with Azerbaijan – a Muslim country – against a Christian nation. All through, the NATO and the US turned a blind eye.

Q: How do you view India’s determined stand on maintaining neutrality during the Russia-Ukraine war?

Dasgupta: I think India’s stand has delivered a clear signal to the US. India takes its own decisions. In fact, India has traditionally, in the past and now, under different governments, taken an independent stance on global tussles.

The difference is that today, unlike earlier years, India’s stand accounts for its leverage on issues in the Indo-Pacific. India hasn’t toed the US line on Ukraine and yet, Biden has unambiguously thrown a military assistance line and also declared India-America relations as a high point. The underpinning point is: the US gets advantage of India’s huge defence purchases which would be heightened now due to Chinese belligerence and the Indo-Pacific needs of the US and the region. India is a pivot in the region and the US recognises it.

This is also because India’s stand has been a nuanced one: India was against the conflict and batted for peace.

The US is also aware that it has to play ball if it wants India to be its political, economic and military ally in the true sense.

The difference between international responses to China and India’s stance on the Ukraine war was that while the two countries’ (India and China) position has been similar – China has been isolated by the West while India gets more favourable attention in Europe and the US.