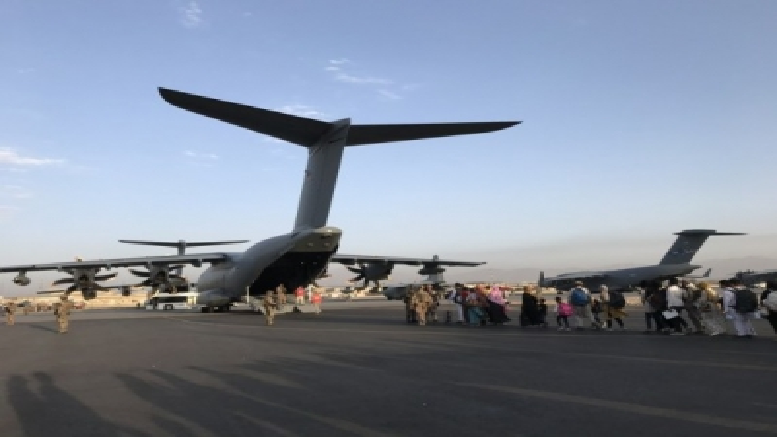 In a remarkable show of convergence of defense, diplomacy and intelligence Bharat has under the direct guidance of Prime Minister, successfully handled the challenge of evacuating its citizens from the trouble-torn Afghanistan in a situation where Kabul International Airport was under the siege of Taliban and even the US was finding it hard to safeguard the Americans trying to exit through the airport.

Liaison with friendly countries was used to work out safe travel routes, influence with the US that was in control of the airport, was utilized to facilitate the arrival and departure of Bharatiya planes and intelligence was pressed into action for enabling the Bharatiya to get past the check points on the way.

The authorities took good care of the Bharatiya citizens on arrival too. Bharat has not hesitated to directly tell the Taliban at Doha that safe departure of remaining Bharatiya from Afghanistan was the latter’s sole responsibility. This working together of various wings of the government is the hallmark of the Modi regime and is indispensable for national security management.

Our Intelligence agencies have particularly served the nation well during these difficult times of external dangers and multiple threats to our internal security. Prime Minister Modi’s exceptional political will to take strategic decisions was in evidence when he ordered surgical air strike at Balakote in Khyber Pakhtunkhwa in Feb 2019 following a terror attack on a CRPF convoy by a suicide bomber of Jaish-e-Mohammad at Pulwama and in the wake of the PLA’s violence in Galwan valley in Ladakh in June 2020, directed a quicker military build-up of our army in that segment to effectively deal with any Chinese aggressiveness on LAC.

The Prime Minister has since then given a free hand to the newly-appointed CDS to strengthen joint commands particularly on the marine front in keeping with Bharat’s full participation in Quad signified by Prime Minister Modi’s participation in the first Quad summit in March this year. The PM is known to be deeply interested in ensuring that the security and intelligence infrastructure of the country kept pace with the times – an extremely competent NSA has strengthened his hands in the areas of security and defence.

All this is happening at the right time because three clear developments in the present are impacting the national security strategy. First, while prospects of open attacks of an enemy had somewhat receded in today’s geopolitical balance, the world has seemingly transited to an era of ‘proxy wars’, border conflicts and foreign-aided insurgencies in which terror methodology had been assimilated.

Terrorist violence offered deniability and also the advantage of remote control. Bharat has been a prime target of the Pak-sponsored cross-border terrorism used as an instrument of proxy war in Kashmir and elsewhere. The anti-Soviet armed campaign in Afghanistan was a classical ‘asymmetric war’ in which the Mujahideen got the better of the army of a superpower – there is a telling repeat of this in Afghanistan at present where the Taliban had compelled withdrawal of US and NATO troops under a kind of pressure that was unusual for the only superpower of today, to face.

Secondly, the two decades of ‘war on terror’ have produced an ongoing geopolitical conflict between the Islamic radical forces and the US-led West which has the potential of threatening the democratic world particularly because there was a quiet support for the former from within the entire Muslim world. Also, Islamic radicals now had a new alliance with China – the leader of the Communist block – that shares with them the political antagonism towards the West.

A give and take in Afghanistan was made possible for China by the Sino-Pak strategic alliance. The rapid rise of radical Islam in the Pak-Afghan region portends a serious security threat to Bharat in the immediate term and a danger to the US for the future notwithstanding the fact that the Biden administration had a sense of ‘comfort of distance’ just because Taliban had given some assurance at Doha that it would restrain Al Qaeda from making any anti-US plan from the Afghan soil.

The Taliban and Al Qaeda are known to have inseparable bonds – Mullah Omar was closely related to Osama bin Laden. Finally, a development occurring everywhere, more so in Bharat, is the unavoidable involvement of the Army as a responder in situations of threat to internal security – independently or in close collaboration with paramilitary forces of the Centre – which calls for a new level of training on both sides and handling of civil-military liaison in all its new dimensions.

This is a long-term requirement of the country needing an organisational, operational and communication reset to maximise the cooperation between the Intelligence agencies of the security and defence domains, as well.

A look back at the growth of Bharat’s intelligence set-up logically connects it with the pattern of the national security scenario and the prime threats to security that existed at a given time. The adverse impact of the international and national Communist movements on Bharat’s new democracy was a major item on the country’s intelligence charter then. With the passage of time their impact on internal security shifted to the geographically defined ‘red corridor’ that harbored Naxalites, better described now as the Maoists.

With the demise of International Communism following the dismemberment of the USSR, a new global threat to security has steadily risen from Afghanistan, the land where Islamic radical forces compelled the withdrawal of the Soviet army and paved the way for the spread of faith-based terror that was being unleashed in the name of Jehad in the post-Cold War era.

The entire Muslim world represents the area of implicit support for the radicals – who are the ‘revivalists’ on the Islamic spectrum considering the US-led West as their first enemy and who claimed to be working for the ‘defence of the faith’. The launch of ‘war on terror’ first in Afghanistan and then in Iraq following 9/11, produced two breeding grounds of radical forces – the Al Qaeda-Taliban axis in the Pak-Afghan belt and the ISIS in Syria and Iraq – both competing with but not contradicting each other in going ahead with the Jehad focused on the mission of bringing down the West.

In the terror attacks by radicals in European cities the historical legacy of hatred against the latter was in evidence – the classical illustration of that being the bombing at Brussels in March 2016 where a leaflet left behind by the terrorists talked of the revenge for the ‘crusades’. In terms of history crusades were led by the Belgian King among others.

Bharat’s Intelligence charter put the task of tracking the new global terror within and outside of Bharat, on the top. This challenge required coverage both through human and technological channels. Military and security dimensions of the Sino-Pak axis are now a part of this new Intelligence challenge.

Coordination amongst agencies – internal, external and technical has to work on a new pitch and pooling of information garnered by defence and civilian agencies has to be ensured without permitting any loss of time. All intelligence must flow to a defined point at the apex where national level collation and analysis would be done for the short term and long range responses.

This is already being done – the function of integral analysis may require a further expansion. In what is a professionally sound strategy our system has already laid down arrangements for day-to-day exchange of operational intelligence through Multi Agency Centres existing at national, state and local levels. The creation of National Security Council with its secretariat headed by the National Security Advisor, after the Kargil war, has further consolidated the intelligence and security infrastructure of the nation.

Under Prime Minister Modi, the NSA has been empowered to bridge – at the very top – the streams of defence and security traditionally separated on Military-Civil line. This is a great advance – it may be mentioned that defence is protection against an ‘open’ external attack while security is the safeguarding of the nation against a ‘covert’ offensive on our own soil that made the civilian security infrastructure the first responder for the same.

Intelligence resources of the nation have to be devoted to cross-border terrorism that had become more sinister because of the access terror groups operating out of the Pak-Afghan belt have, to drones and the sophisticated firearms of the US left behind – in the hands of the Afghan national forces that fled the country for safety from Taliban. The covert offensive against Bharat will be stepped up as Pak ISI feels emboldened after the evacuation of US and NATO troops from Afghanistan.

Al Qaeda in Indian Subcontinent (AQIS) based in Pakistan is likely to be put in the lead, along with other outfits, for India-specific operations. Already ISI is said to be behind a purported statement from Al Qaeda describing Kashmir as an ‘Islamic land’. All this may see China also speeding up with the pursuit of its hidden agenda in the North-East in keeping with the Sino-Pak military alliance.

These two adversaries could fish in the troubled waters of Bharat’s domestic turf because of the presence of sympathisers of Islamic radicals here, ongoing divisive politics around minority questions and the lobbies at home and abroad playing ‘politics by proxy’ against the Modi government.

In the Bharatiya context there has been a healthy practice of keeping the sphere of intelligence clinically distinct from the work of ‘investigation’. Intelligence agencies of the country though manned by IPS officers had no police powers – they used tradecraft techniques like surveillance, confidential enquiries and interview under cover to collect information on suspects that would help the investigation – intelligence is information not necessarily ‘evidence’.

No investigation agency should be set upon an intelligence organisation unless an intelligence operator had committed a grave illegality for personal interest and the organisation had carried out an internal scrutiny first. Intelligence agencies work on trust of the government and in Bharat they had established a reputation for not working with any personal or political vested interest when probing into an anti-national activity.

The confidentiality of the intelligence work has to be given total protection and morale of intelligence personnel kept up in the present times. As the challenges before intelligence agencies grow, security of hard core information of intelligence value communicated or stored in the digital medium, would also become extremely important.

In a nutshell all of this adds up to a proposition that Bharat would do well to invest adequately on intelligence and security while building up our defense.