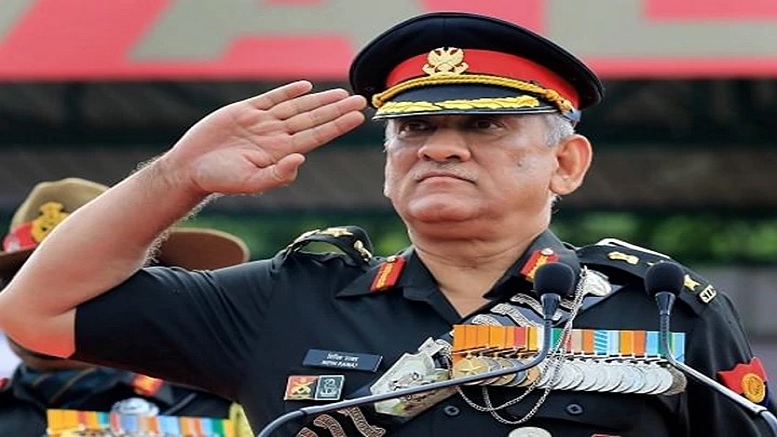 In the tragic demise of General Bipin Rawat, the country’s first CDS (Chief of Defence Staff) – in a Mi-17 V-5 chopper crash at Katteri in Coonoor, Tamil Nadu – the nation has lost a true patriot and a great soldier. 12 other bravehearts including General Bipin Rawat’s wife and his chief advisor Brig L.S Lidder also lost their lives.

His death has left an immediate void in the chain of command as he was also the chief military advisor to the Raksha Mantri, permanent chairman chief of staffs committee and Secretary Department of military affairs in the defence ministry.

The former CDS was actively engaged in the groundwork for the formation of theatre commands, a task which was very dear to him and which the nation urgently needs given its hostile Neighbors.

A specialist in counter insurgency he launched a blitzkrieg operation that killed 38 insurgents in 40 minutes deep inside Myanmar in 2015. In 2016, as vice chief of army he oversaw the neutralizing of 35-40 Jaish-e-Mohammed terrorists  and their  launchpads in PoK after 19 army jawans had been martyred in Uri.

Never to take a step back in his capacity  as the chief of army staff, he successfully  thwarted China’s aggression in Doklam in 2017 and the dragon was forced to retreat  after a 2 month stand-off where the Bharatiya army stood its  ground protecting the interests of both Bhutan and Bharat.

In 2019, he launched the Balakot strikes after 40 CRPF personnel were killed by a suicide  bomber in Pulwama. The mirage 2000 strikes inside the Khyber Phaktoonkhwa region in Pakistan were carried  out when he was the Chief of army staff. Lt Gen Satinder Kumar, who was an army commander, then recalled how General Rawat had called all his army commanders  and told them that it was a high profile operation and that they should  be on guard for possible retaliation.

He minced no words in pronouncing China as the country’s biggest enemy much to the chagrin of the dragon. China saw Bharat’s resolve at Doklam and it has rattled them to such an extent that its mouth piece “Global times,” stooped to a new low as it took out its ire on the late General in one of its comments calling him anti-China even as the whole world poured his tributes to the valiant soldier of Bharat.

The US defence secretary Llyod Austin  described General Rawat  as “A valued partner,” while secretary of state Blinken termed him as an “exceptional  leader.” Russian ambassador to Bharat Kudashev described him as a “great friend of Russia.”

Neighboring  enemy Pakistan also saw the steady resolve of the former Chief when terrorists and their launchpads were destroyed twice  in a deadly strike deep inside Pakistani territory  leaving the terrorist nation battered and bruised.

The setting up of the theatre commands was the most important  task being carried  out by General Bipin Rawat when death intervened abruptly. The integration, synergising and synocronyising of the three services for effective defence and attack capabilities by the formation of 5 theatre commands on the lines of those in the US and the European powers was being diligently  pursued by the former CDS after getting  a go ahead  from the Narinder Modi government.

In what would be the boldest move since independence General Bipin Rawat said that 17 single service commands would be combined into 4 geographical commands each having a mix of three services. “Today we have four different army commands looking after Pakistan: northern, western, south-western and southern commands. From the air force we have three  looking after that frontier: western Air command, south-western air command and southern air command. From the navy we have western naval command and southern naval command,” explained the former CDS.

The frontier with China is also managed by similar multiplicity of commands. The army’s Central and Eastern commands look after the northern border while the army’s Northern command is split between the western border and the northern border. “If you count their are 17 commands that are responsible for guarding against both are adversaries,” he said.

A maritime command which will be navy centric would be responsible for the security of the Indian Ocean and an island command already functional called the Andaman & Nicobar command would look after Bharat’s maritime interests in the eastern Indian Ocean.

The fifth theatre would be the air force command responsible for manning the air space above headed by a dedicated air force commander in chief. He also envisaged a sixth joint commander to look after the cybersecurity, cyber warfare  and cyber attacks.

However, with destiny cutting short a promising career of the first CDS of the country, the government would be hard pressed to appoint the next CDS at the earliest to ensure continuity and active pursuance of the national objective of setting up theatre commands.
Chief of army staff General Manoj Mukund Naravane  who succeeded  General Bipin Rawat in 2019 as the army chief is the senior most amongst the 3 chiefs and is most likely to be the next CDS.

It will  be very hard to fill the boots of the late General but the streamlined defence hierarchy which has always played second fiddle to the elected government in power, will ensure a smooth transition to fulfill the national objectives.

General  Rawat was a highly  decorated  officer who always  hit the ground running and leaves behind a rich legacy of high values and selfless service to the nation . His critics including some of his peers who did not have the spunk to face him when he was alive may revel in  his death calling it “divine intervention,” but for the nation he was the valiant soldier who led from the front till fate intervened.

An alumina of St Edward’s School, Shimla – which also happens to be the alma mater of lesser mortals like me – his passing away has enveloped the school fraternity in grief and mourning.  Just as the Latin words embossed on the school crest ” Lumin Sequere” meaning “Follow The Light,” his successors in higher echelons of defence and those at the lower rung are set to follow the path lit by him to take Bharat  to greater heights.