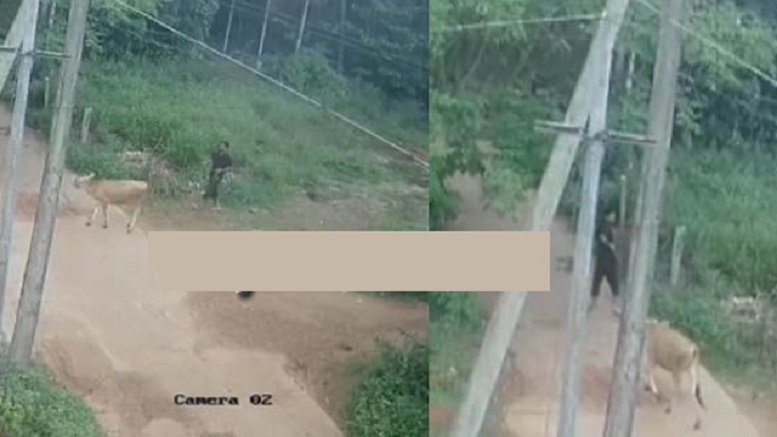 A cow theft and slaughter by one Ibrahim has been reported from Udupi in Karnataka. Around noon on 6 June, Ibrahim was caught on CCTV cameras while attempting to yank a young cow towards his house. He took it home, slaughtered it in his bathroom, and then sold the meat.

The cow belonged to his neighbor Yamana Gangadhara. He had tied it nearby for grazing and that is where the thief undid the rope and dragged the poor animal to its death. Yamana took the video clip to the Malpe police station and lodged a case.

It is not known whether Ibrahim has been arrested as yet.

Anyone who rears a cow would know how the entire family gets attached to this kind and loving animal which Hindus hold sacred. Urban HINOs can compare it to how they feel towards a pet dog or cat. How would they feel if someone stole their pet dog, murdered it and then sold its meat? Well, multiply that anger manifold and you can begin to understand what ordinary Hindus feel towards cattle smugglers and the beef mafia.

It was a similar case of a calf being stolen, murdered and cooked that led to the angry attack on Mohammed Akhlaq in Dadri, UP. While reams are still being written about Akhlaq’s ‘lynching’, the lakhs of cattle that are stolen each year, leaving behind grieving families, are ignored, except by a few news organisations like Swarajya who have cared to do ground reports in areas plagued by this illegal trade.